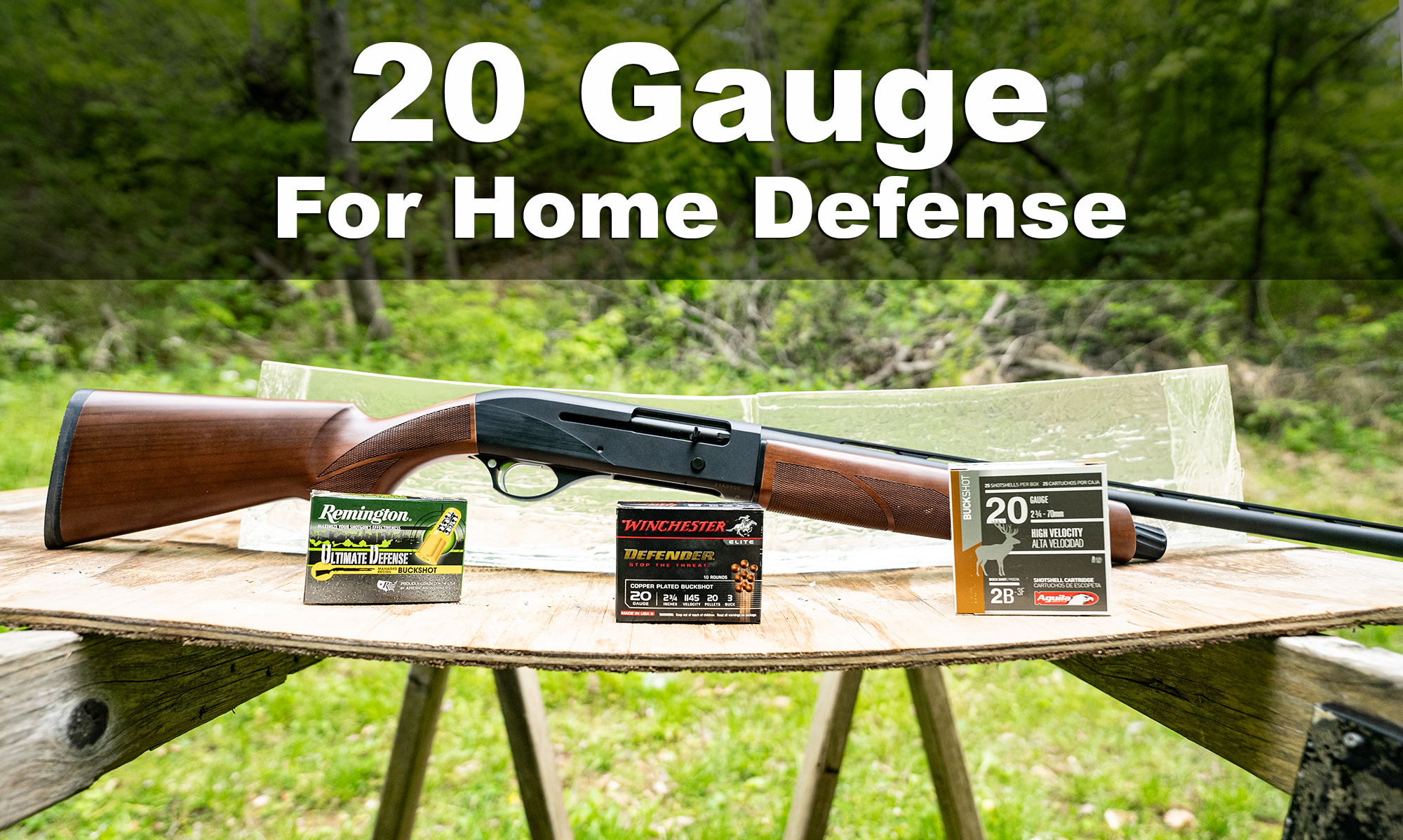 A look at the 20 gauge shotgun’s viability as a home defense tool along with some ammo recommendations if you opt for the smaller of the two primary shotgun calibers.

When it comes to shotguns, the 12 gauge is king. Dominating the market, 12-gauge shotguns and ammunition are the go-to choice for hunters, trap shooters, and people concerned with home defense.

The second most popular? That’s the lighter, versatile, shoulder-friendly 20 gauge. But it’s a distant second.

For a variety of reasons, the 20 gauge is often seen as a tool for youth hunters and small-framed shooters. Certainly not a weapon for home defense by capable, experienced gun users.

Not entirely. A 20-gauge shotgun, when used correctly, can certainly be an outstanding home-defense firearm. An important factor, however, is what you load into the weapon.

Why a 20 Gauge for Home Defense?

The 20 gauge, when used appropriately, is a perfectly acceptable weapon for home defense. There is simply no doubt that a 20-gauge shotgun, loaded with buckshot ammo, will do significant damage to virtually any target, including a home intruder. Look at the image above, the Winchester buckshot offers 20 pellets you can throw at a threat. In this case, we fired it into ballistic gelatin and through a 4-layer fabric barrier. The results are impressive!

The main advantage of a 20-gauge shotgun over 12 gauge for home defense is less recoil. By using a smaller shotgun load, shooters can reduce recoil into their shoulder while lowering barrel rise. All of this results in better control of the weapon, which in turn means a higher chance of effective, accurate follow-up shots.

With less recoil, there is also a better chance that the user will actually practice. 12 gauges can be painful on smaller or less-experienced shooters, and this can result in little to no practice; as all responsible gun owners know, practice is essential for proficient use, especially in a high-stress emergency situation.

The lowered power of a 20-gauge could also reduce the chances of over-penetration, which is always a concern when using a weapon indoors.

For a variety of reasons, the 20-gauge can be an effective home-defense tool. So why aren’t they used more?

Quite frankly, it’s not the size and design of the 20-gauge shell that makes it less popular for home defense. Rather, the largest barrier is the firearms industry. A 20-gauge shell has the foundation to be an outstanding home-defense load, but the ammunition and weapons manufacturers simply don’t support it.

Almost all home-defense shotguns and shotgun loads are based on military and police applications. Can you guess what the U.S. Army and your local police force prefer? That’s right: the 12 gauge!

The vast majority of research, development, and manufacturing for defense-based shotgun ammunition goes to the 12 gauge, which means the average consumer looking for a defense round has almost no options in 20 gauge.

But lack of industry support is not the only issue.

There is also the chance for higher recoil. The might seem contradictory, and we admit it is. Yes, 20-gauge shotguns produce less power, which means less recoil. (Stay with us!) But 20-gauge shotguns are lighter, often weighing about a pound less than a 12-gauge weapon. Heavier weapons absorb more recoil, so a 20-gauge can actually feel as if it has more kick. And felt recoil, as far as a shooter is concerned, is all that matters. (Theoretically, if manufacturers made a slightly heavier 20-gauge, it could be an outstanding home-defense weapon.)

Of course, there is also the issue of less ballistic force. We can debate the importance of energy and ballistic performance all day, but if you make well-placed shots on an intruder with a properly-loaded 20-gauge shotgun, it will, without a doubt, deliver effective results.

You can learn more about the differences between 12 and 20 gauge in our article here.

What to Look For in 20-Gauge Ammo for Home Defense

Although the 20-gauge gets little industry support, there are still some smatterings of options made specifically for home defense. Even if you can’t find options specifically made for home use, if you are strategic and informed you can find effective shotgun options.

Buckshot Only; No Birdshot!

First of all, if you are selecting ammunition for home defense, stick with buckshot and avoid the use of birdshot entirely. It’s fairly obvious if you think about it: birdshot is intended for harvesting ducks, pheasants, and quail. Yes, these are tough birds, and a birdshot will certainly damage an intruder. But buckshot is for dropping deer and other medium or large animals. Clearly it has more potential for penetration and energy placement than birdshot.

For buckshot sizes, you may have to take what’s currently being produced, but (generally speaking) the larger the pellet size the better. For shotgun ammo, this means a smaller number. (#1 buckshot is larger than #2, for example.) 20-gauge shells loaded with #3 or #4 buckshot are effective, but if you can find #1 or #0 you will be in good shape.

Learn more about buckshot versus birdshot in our article here.

If you are specifically choosing a 20 gauge for home defense over a 12, you’ll want to select 2.75 inch shells or shorter. Three-inch shells, even in a 20-gauge, can bring a lot of power; combined with a lighter shotgun, this can mean a fierce recoil.

You’ll find 20-gauge ammo with 2.5-inch shells and smaller, but you may have trouble finding buckshot loads in this length. Therefore, a 2.75-inch shell is the sweet-spot for power, pellet size, and manageable recoil.

However, if you are using a 20-gauge shotgun for home defense, but not concerned with recoil (perhaps you’re simply converting your trusted 20 to a home-defense weapon), then 3-inch shell will suit your needs.

Our Picks for Home-Defense 20-Gauge Ammo 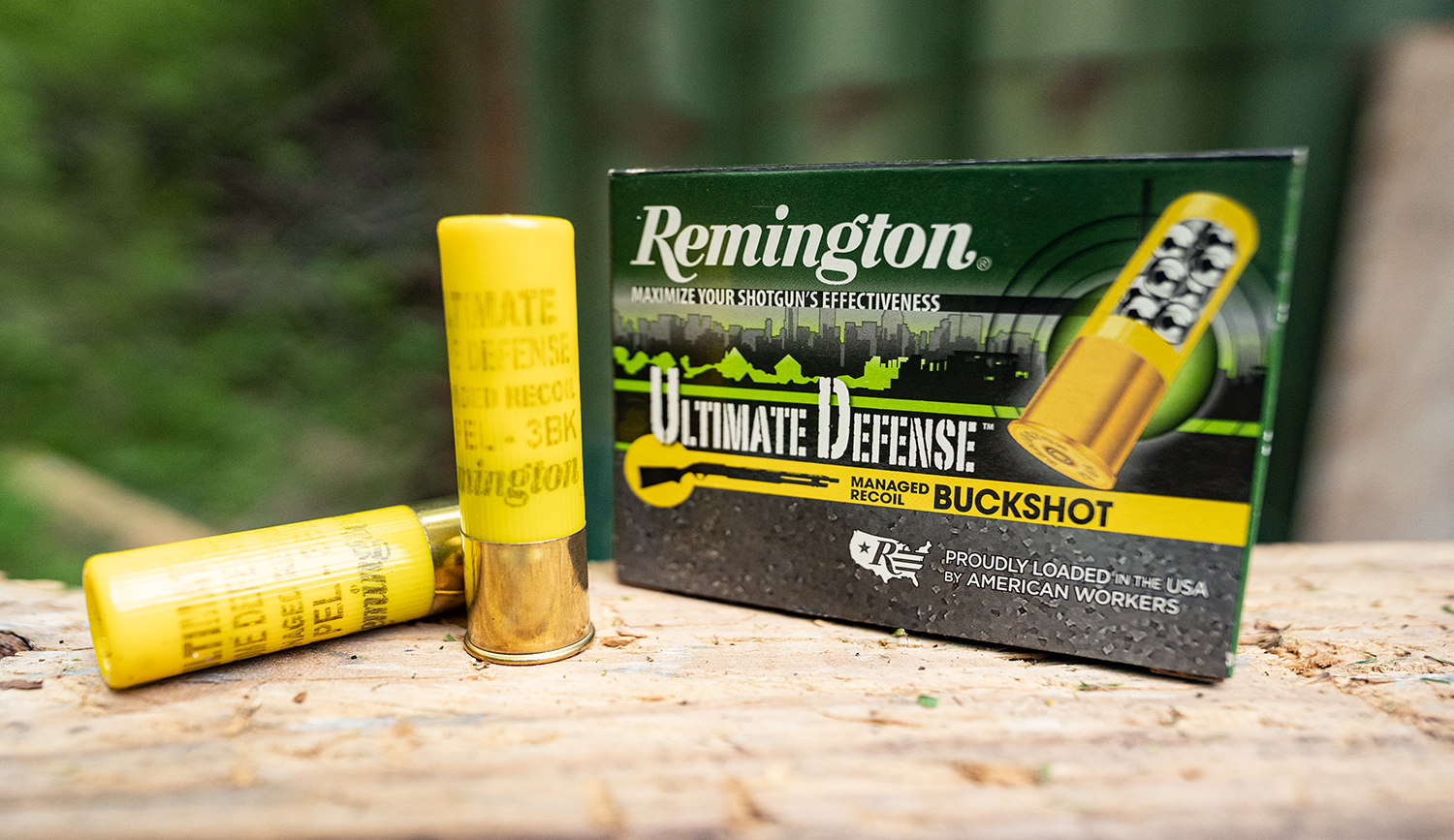 While it can be harder to find top-quality home-defense ammunition for a 20-gauge shotgun, it’s not impossible. There are products specifically made and marketed for home defense, but there are also hunting loads that can make effective home-defense rounds.

This is one of the few 20-gauge loads made specifically for home defense. Loaded with #00 buckshot, these rounds deliver devastating power to a target. Intended for tight patterns at short-ranges, this is an effective option for your home.

With #1 buckshot and a muzzle velocity of 1,345 fps, this deer-hunting load is perfectly capable of stopping a home threat. #1 buckshot is also a popular choice for home defense, as it has less chance for over penetration while still delivering a strong impact.

Using copper-platted #3 buckshot pellets, this ammunition is intended to deliver precise performance to the field. But with impressive stopping power for deer, hogs, and predators, it will certainly deliver enough force to stop an intruder.

You can see our full in-stock line-up of 20 gauge ammo here. Just remember, go buckshot rather than birdshot and you should have something that’s a legitimate tool to stop a threat.