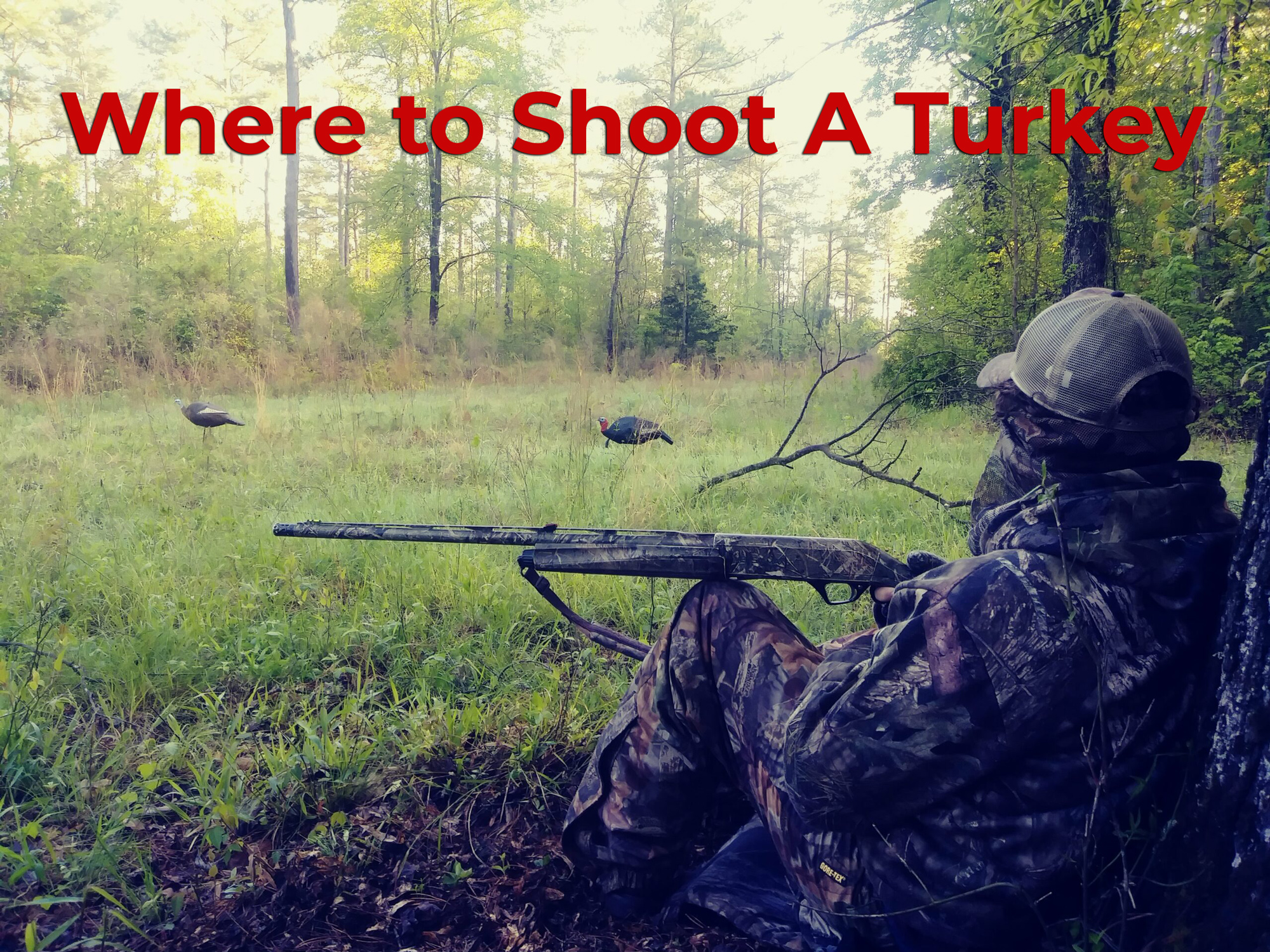 An easy to follow guide for hunters detailing your best options for shot placement on turkeys.

Hunting wild turkeys is hard work. It takes a ton of skill and more than a little luck to locate a gobbler, sneak within calling range, and then convince him you’re a hot hen looking for love. The last thing you want to do is ruin all that hard work with a poorly placed shot. In this guide, we’ll show you where to shoot a turkey with both firearms and bows for a clean kill.

Turkey hunters spend hours honing their calling skills but those skills won’t matter a hill of beans if you screw everything up with a bad shot. Proper shot placement is arguably more crucial to punching game tags than your calling prowess.

Not sure where to place your crosshairs, bead, or sight pin? We’ll walk you through everything you need to know. 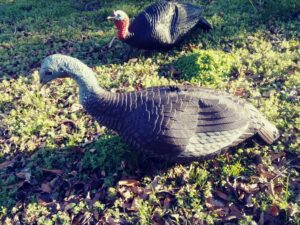 Serious deer hunters have been conditioned to aim for the heart and lungs when attempting to put meat on the table. However, turkeys and whitetails don’t share a ton of similarities. Using standard deer shooting strategies just isn’t going to work during turkey season.

Turkeys have thick feathers and heavy muscles that often work against decent shot penetration. Plenty of experienced turkey hunters have stories of their #5 shot bouncing off a big gobbler’s side like he was made of rubber.

Aiming for a longbeard’s heart and lungs is only going to leave you frustrated. Even worse, it will probably end with a crippled bird heading off to die a slow, agonizing death.

Where to Place Your Bead 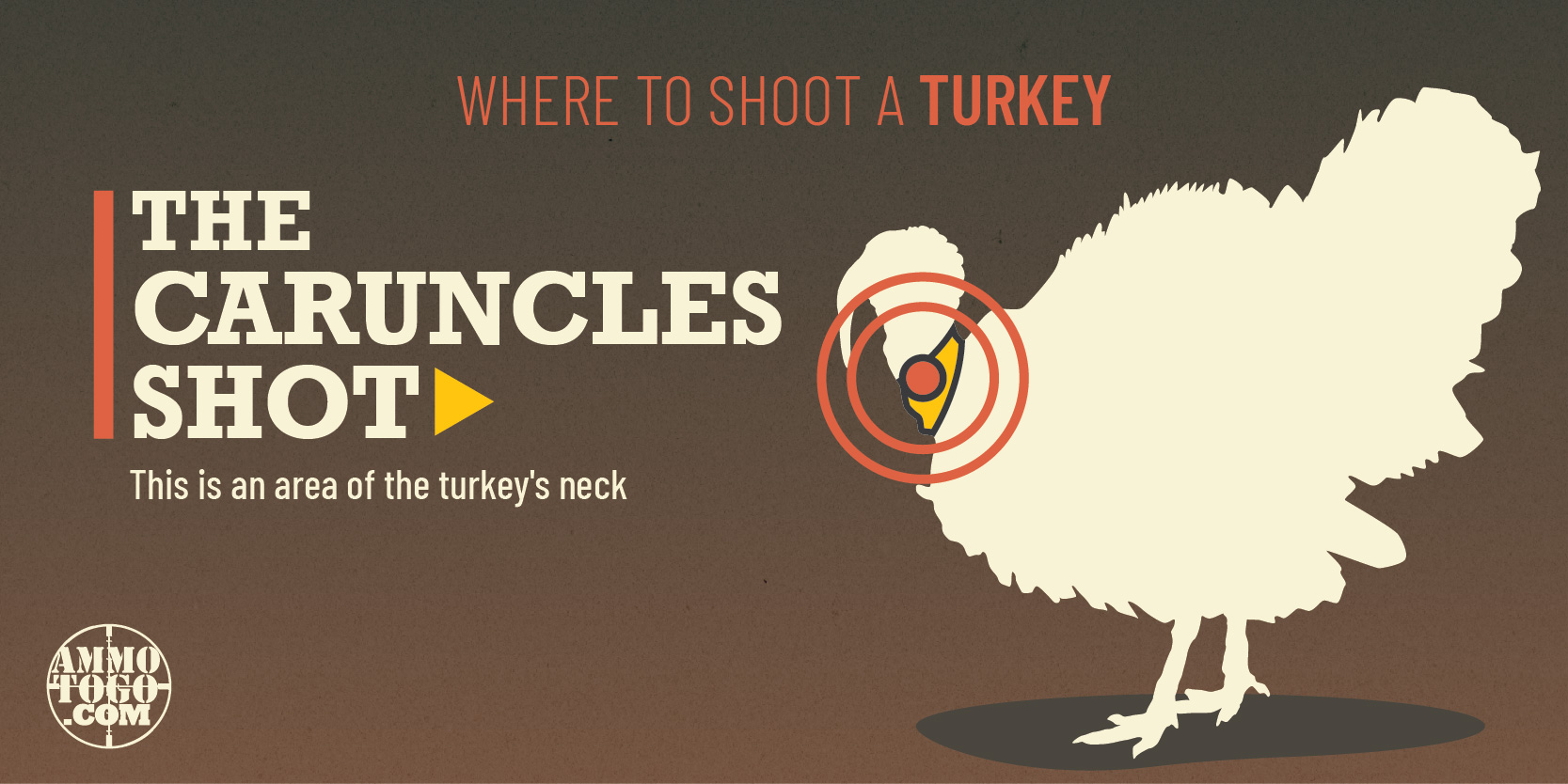 When shooting wild turkeys, aiming for the head and neck is generally the best course of action. Although the head is small, it is the bird’s most vulnerable spot. The neck, which contains the spine, nerves, and blood vessels, is also a point of weakness.

A spray of shot to the head and neck will shatter the turkey’s central nervous system. While residual reflexes can cause some frantic flopping, when you put pellets in a boss tom’s head and neck brings death almost instantaneously.

A good shot will kill a turkey on a dime, but making a good shot isn’t easy. Turkey heads are almost constantly in motion. That means your target is about the size of a tennis ball and it’s perched on a stick and bobbing around in the woods. 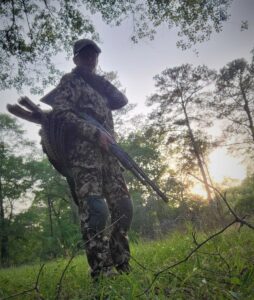 Aiming directly for the turkey’s head is a common rookie mistake. Not only does a wary gobbler move his head erratically, placing your end bead on a turkey’s noggin will send most of your pellets sailing right over the top of the bird.

Instead of covering a tom’s head with your bead, aim for the bird’s lower caruncles. Caruncles are those wrinkly, wart-like blobs of skin that cover a turkey’s head. Males have some extra bulbous caruncles right above the line of feathers that separates the bird’s neck and body.

Align your sights with those red caruncles, but keep the bird’s head above your gun’s bead. This allows your shot spread to blanket the entire head and neck area. Not only does this point of aim provide the most shot coverage, it also allows for a slight margin of error. Having even the tiniest bit of wiggle room is an asset in situations where adrenaline and excitement can throw off a shot.

Turkey’s have amazing eyesight. Unlike deer, they see in vivid colors. They can also see a full 270 degrees and can spot even the slightest bit of movement. It’s no wonder it is so darned hard to put one on the dining room table. 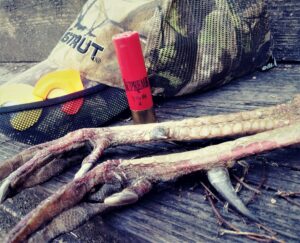 Sitting still in the woods is absolutely essential when you’re turkey hunting. Even when it doesn’t seem like the turkey is looking at you, chances are good he can still see you. Add several turkeys, all searching the woods with their extra keen eyes, and you’ll need to be stiller than a statue.

If you need to adjust the position of your shotgun to make an effective shot, wait until the turkey’s head is obscured, either by a tree, thick brush, or his own strutting fantail.

Wait to pull the trigger until his head and neck are extended. Shooting a broadside gobbler in full strut is a bad idea. When a tom struts, he pulls his head and neck tight against his body. As he pulls in his head, he also puffs out his chest to impress the ladies, which can block your pellets from reaching your intended target.

If a strutting longbeard is facing you head on, a shot to the head and neck can still be effective. However, be prepared to break some teeth on pellets in your meat. There’s also a good chance you’ll ruin that boss tom’s beard.

It is almost always better to wait until the gobbler falls out of the strut. If you can’t wait for that to happen, you can pull him out of it with a few “putts” on a mouth call. Usually a tom will lift his head to see what made the sound, providing the perfect shot opportunity. You’ll just want to act quickly before the gobbler discovers it wasn’t his new girlfriend that made the call.

Before opening day, it’s a good idea to pattern your scattergun. This will verify your point of aim and provide visual confirmation of how your pellets will impact a turkey’s head and neck.

When choosing a turkey load, don’t just grab whatever brand your buddies shoot. You’ll want to test a few different loads at varying distances to see what produces the best results from your shotgun. Patterning your shotgun will also help you determine your maximum effective range. You might even consider checking out a few shotgun chokes.

Shooting a Turkey with a Rifle

Some states have fall turkey seasons that allow hunters to take both toms and hens with a rifle. If you’re lucky enough to have a rafter of turkeys approaches your deer stand, it’s going to be very tempting to take a shot with your rifle. If you do, decide to take a shot, aim for the base of the turkey’s neck. Although a turkey’s body is a much larger target, hitting a turkey square in the midsection with a .30-06 isn’t going to leave you with enough turkey for your Thanksgiving dinner.

Shooting a Turkey with a Bow 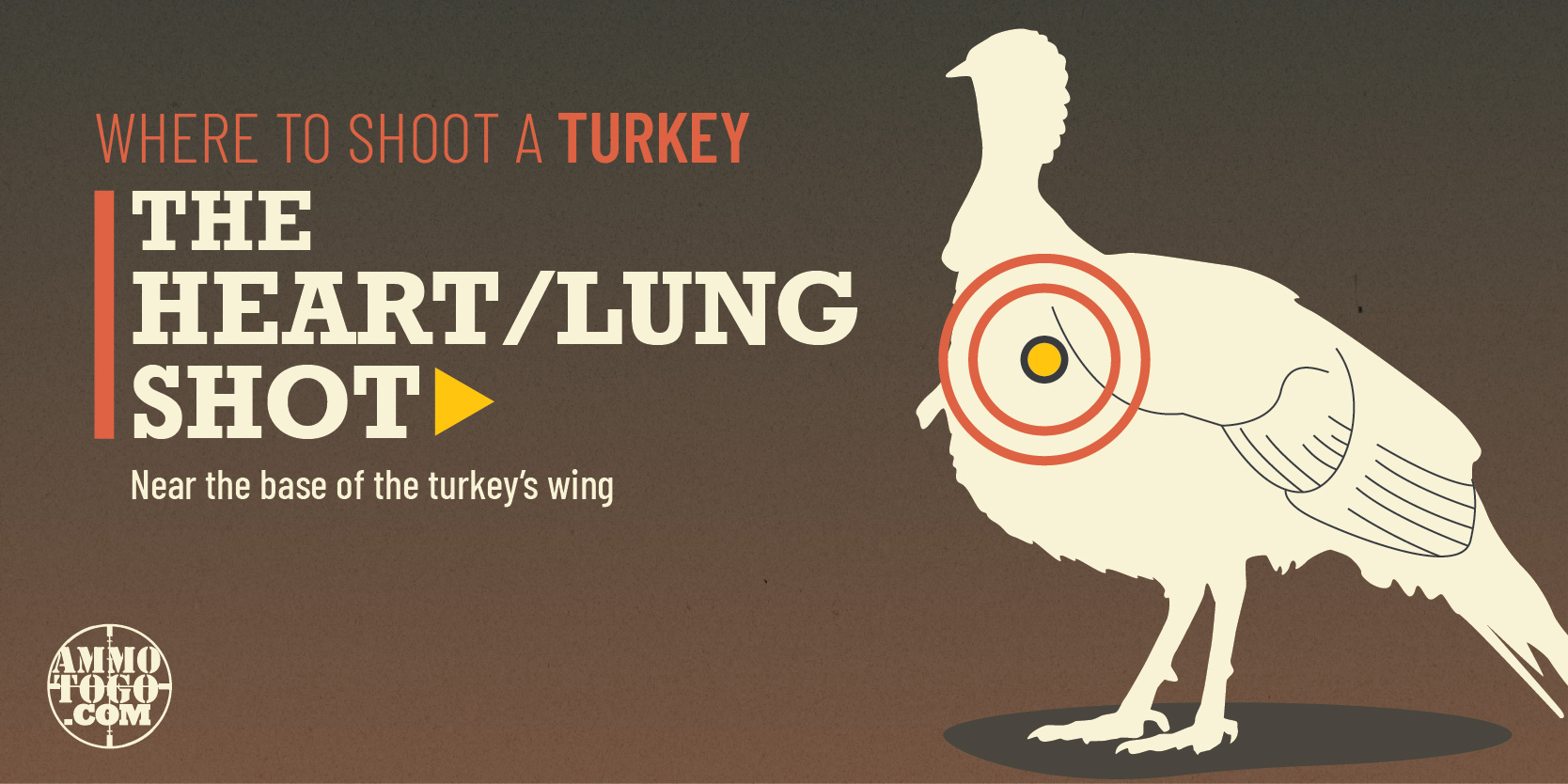 Not only is it more difficult to get a shot on a turkey with your bow, proper shot placement can be even more problematic than it is with a shotgun.

Some bowhunters endorse a head-and-neck shot with the goal of decapitating the bird. However, there are a ton of things that can go wrong with that shot. Honestly, few expert archers can pull it off. It’s more of a trick shot than an effective way to bag a bird.

When shooting a turkey with a bow, it’s actually a smarter option to aim for the bird’s heart and lungs.

If the turkey is broadside, place your sight pin right at the base of the wing. If your arrow hits its mark, it will bust the wing bones and punch through the lungs. Even if the arrow doesn’t pass clean through the turkey, it will pin the bird’s wing, preventing it from flying off.

Some bowhunters will reduce their draw weight to prevent over-penetration. A bird that is stuck with an arrow is easier to recover than one that has been shot clean through. A wounded bird that gets away is hard to track, so you want to keep him where he is. Turkeys rarely leave an easy-to-follow blood trail because their feathers soak up blood like a sponge.

The Straight On Shot

With a tom facing you in full strut, you’ll want to put your arrow right through the top of his beard.

If he isn’t strutting, but walking toward you, aim for the top third of his breast. This should send your arrow through the lungs, possibly slicing the heart along the way.

The Facing Away Shot 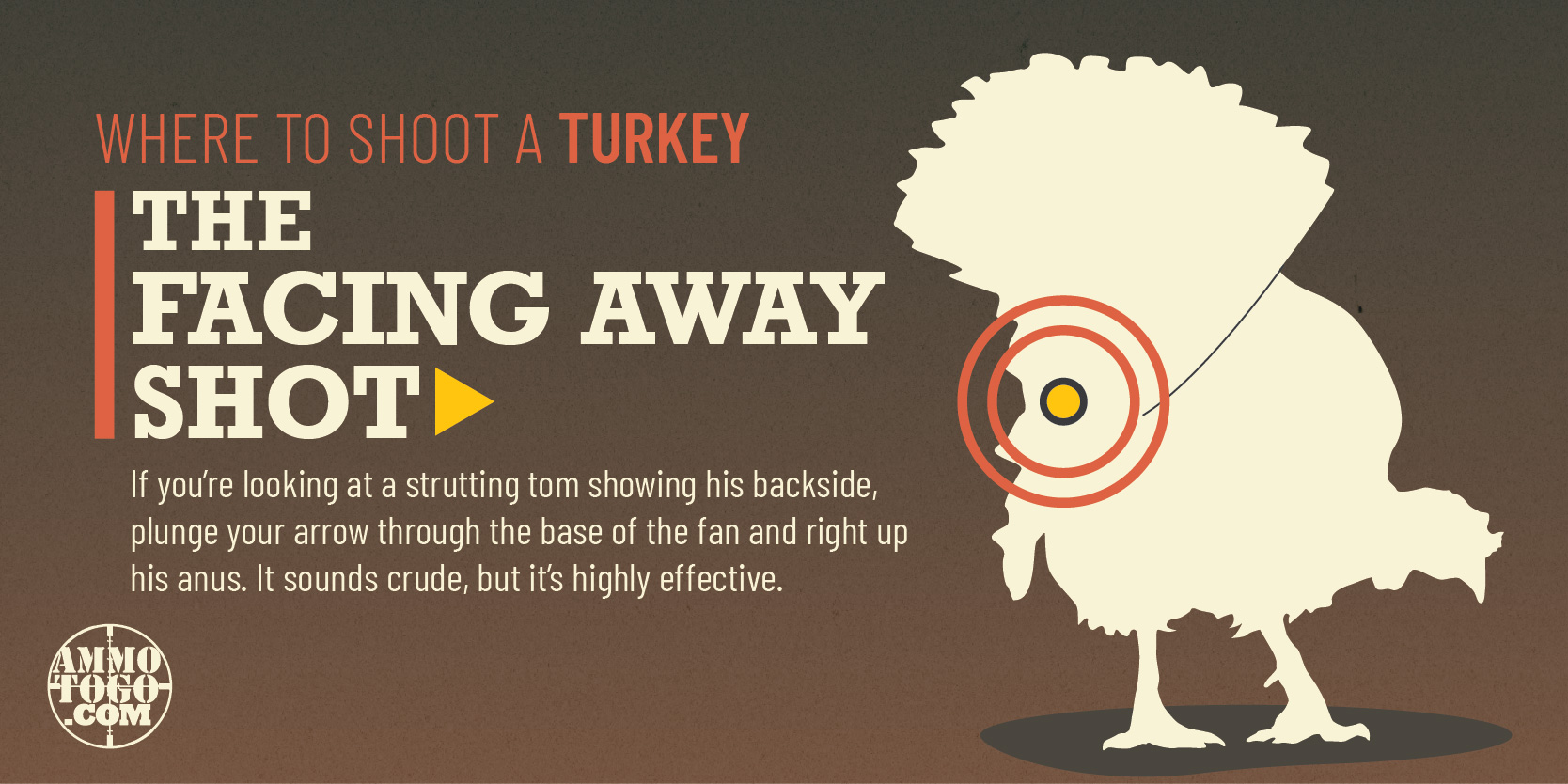 If you’re looking at a strutting tom showing his backside, plunge your arrow through the base of the fan and right up his anus. It sounds crude, but it’s highly effective.

When watching a bird walking away from that isn’t in full strut, position your sight pin right in the middle of his back. This shot should break the spine and puncture the vitals.

Hunting wild turkeys is a thrilling and rewarding experience. There’s nothing quite like hearing a gobble echo through early morning fog or seeing a big tom strut toward your decoys.

Bagging an old longbeard is incredibly satisfying. Roasted wild turkey is pretty satisfying, too. Knowing where to shoot a turkey not only increases your chances of punching your tags, it also helps you avoid ruining any of that delicious m