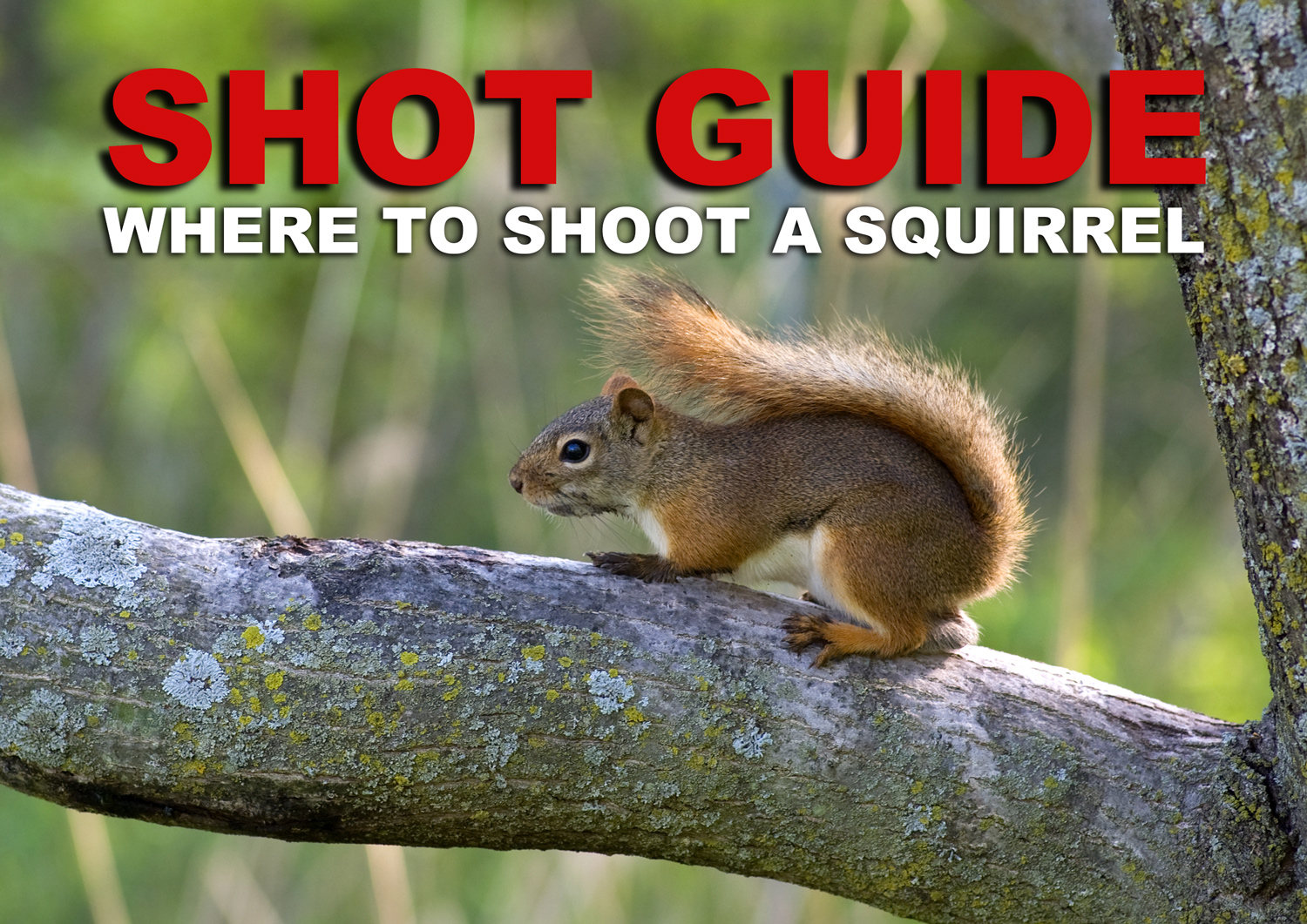 A look at where to shoot a squirrel. We’ll cover the basics for shotgun, rifle, air rifle and even bow hunters.

Sneaking within shooting range is no easy task. However, if you find the right area, you’ll have plenty of shot opportunities, even if you’re only hunting through the afternoon.

Even though squirrel hunting can be fast-paced and fun, missing a few of those bushy-tailed beasts can quickly suck the joy out of the experience. Even worse than out-right missing, is hitting one of those wily critters and having it run off injured.

A squirrel makes a pretty small target, so when it comes to marksmanship, you’ll need to bring your A game. If you aren’t sure where to place those crosshairs, we’re here to help. In this article, we cover exactly where you need to aim, whether you’re hunting squirrels with a rifle, shotgun, bow, or air rifle.

Chasing squirrels is one way to scratch your hunting itch, perfect your stalking skills, and practice your shooting technique in the off-season. In most states, squirrel seasons are long, bag limits are generous, and squirrels are plentiful. All of which adds to the fun.

When prepared properly, squirrel meat can even be pretty tasty. According to most squirrel connoisseurs, the meat is similar to chicken in both texture and flavor, although it is slightly darker, and definitely tougher, than the average store-bought roasting hen.

Because squirrel hunting is fun and fast-paced, it is perfect for youngsters. Since squirrels have notoriously short attention spans, if you miss a shot opportunity, another usually presents itself within a few minutes, especially if you can sit still and be patient. Sometimes, a gunshot doesn’t even faze them, especially when you’re shooting a quiet-shooting .22 or air rifle.

Shot Placement with a Shotgun 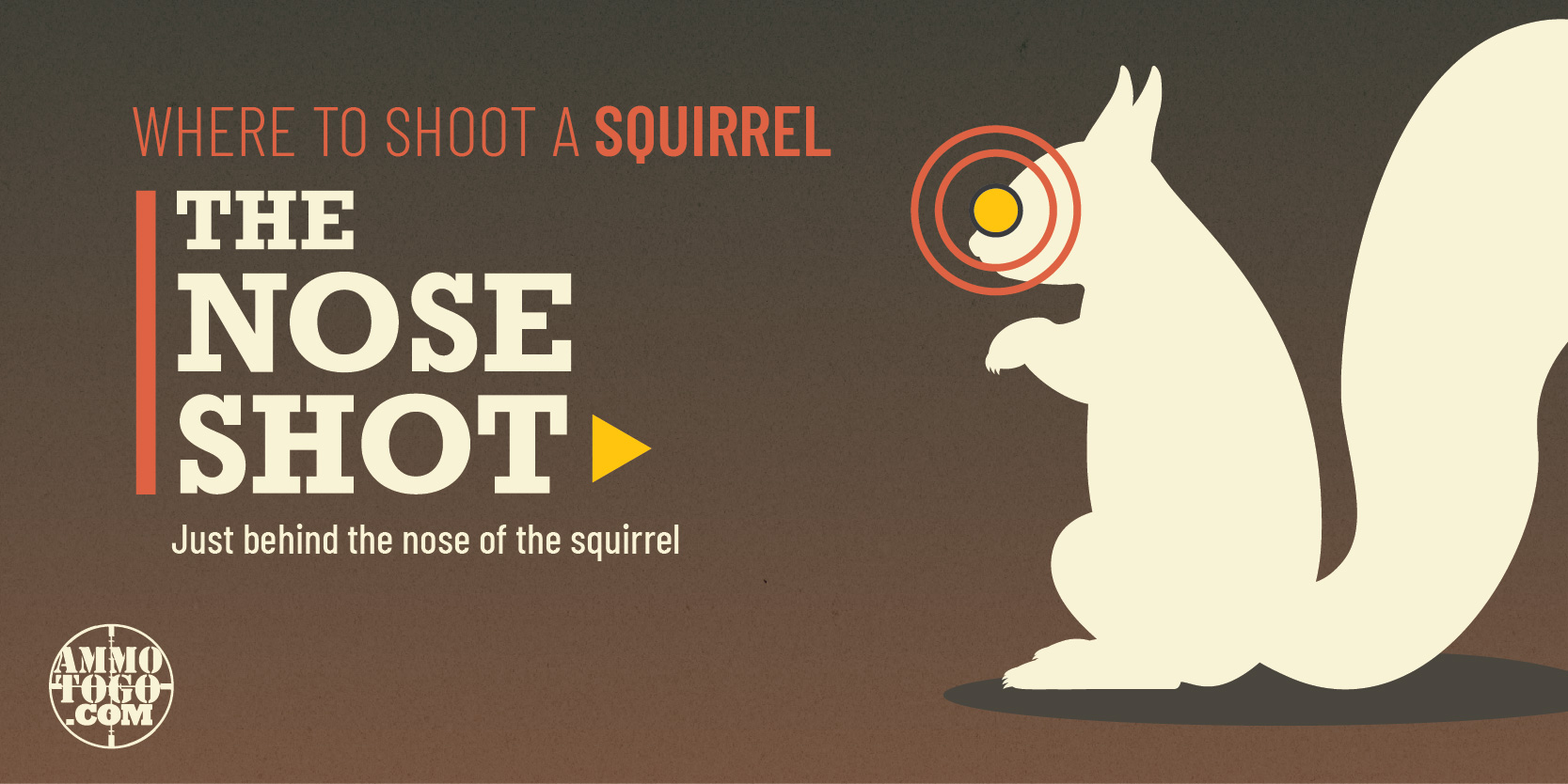 During the early fall, squirrels most often hang out high in the forest canopy. With plenty of foliage still hanging onto those high branches, early squirrel season is the perfect time to hunt with your shotgun.

Use a full choke and load your scattergun with #5 or #6 shot. Magnum loads are an asset when trying to reach squirrels in the highest branches.

When shooting squirrels with your shotgun, place the bead just off the tip of the squirrel’s nose. This will pepper the head and neck with shot while preserving most of the meat, which is important if you plan to add squirrel to the menu. Nothing is worse than chomping into a piece of #5 shot while you’re savoring a piece of perfectly fried squirrel.

It’s a good idea to familiarize yourself with your shot spread before you hit the woods. You can experiment by shooting paper targets with different loads to see what works best. You can adjust the exact hold-off based on your shotgun’s performance and the distance to the squirrel. Ultimately, you want a nice, tight shot pattern, especially when you’re making shots out to 30 yards or beyond.

Where to Shoot a Squirrel with a Rifle 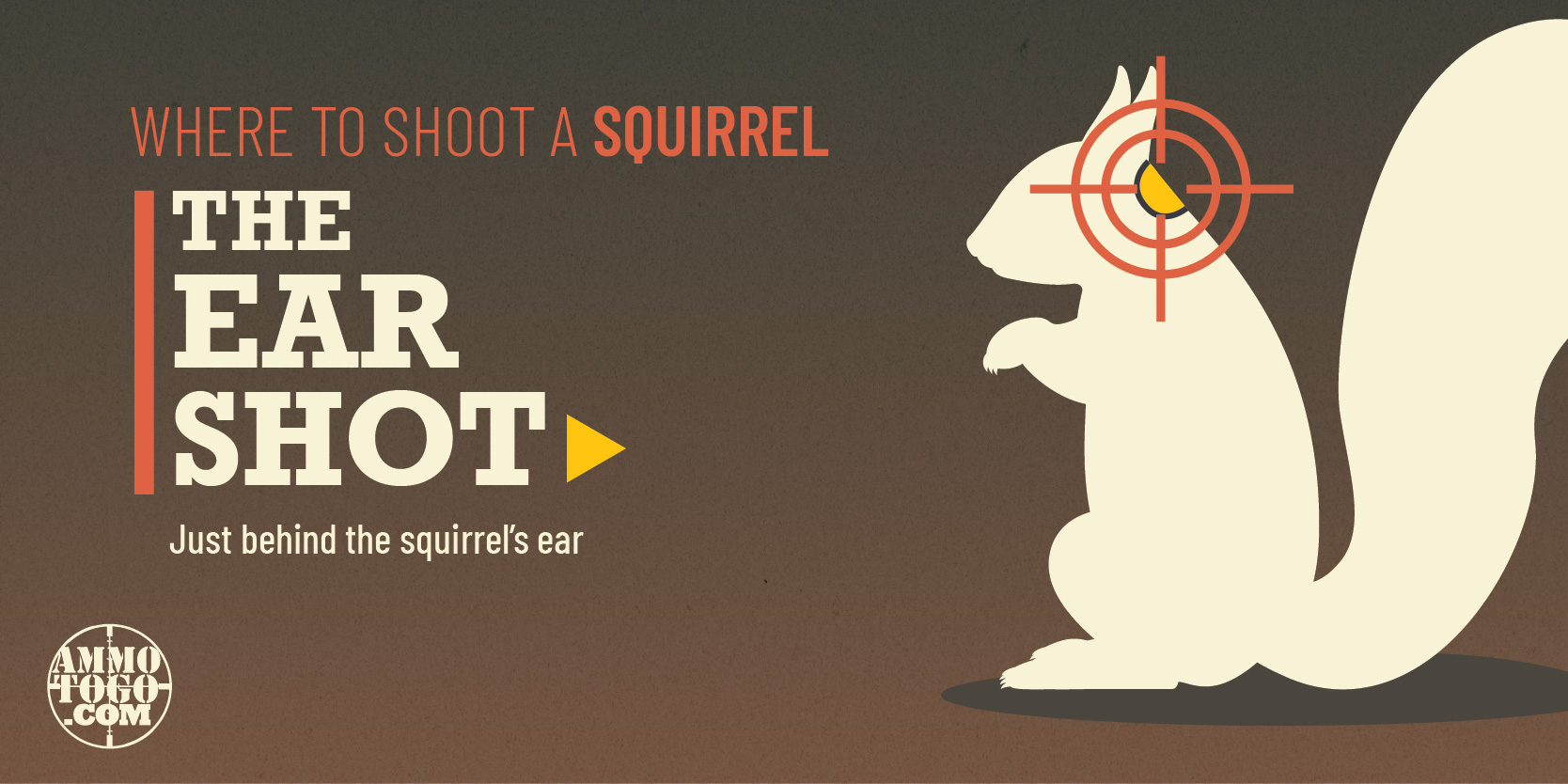 A .22 rimfire rifle is definitely the go-to squirrel gun for most hunters. A .17 caliber rimfire rifle is probably a close second. If you’re toting one of these trusty rifles into the squirrel woods, place your crosshairs (or your end sight) just behind the squirrel’s ear. This will give you a little wiggle room just in case you pull your shot.

There are plenty of squirrel hunters who prefer aiming for a squirrel’s vitals. While a shot to the vitals definitely works, a squirrel’s vital area is about the same size as his head. Since you can make a headshot with the squirrel in almost any position, aiming for the noggin is just practical. A headshot squirrel is also a heck-of-a-lot easier to dress out and leaves the meat undamaged.

A scoped rifle with .22 ammo is a handy tool for dropping squirrels once the leaves begin to fall. As autumn ramps up and the leaves begin to drop, squirrels can spot you coming from further away. Sneaking up close becomes a serious challenge. A rifle/optic combination that allows you to make confident, precision shots out to 60 yards may be the only way to put a squirrel in your stew pot.

If you want to be super stealthy, opt for a subsonic .22 LR load. As quiet shooters, they don’t do much to disturb the peace and serenity of the woods. Without a loud report, critters will return to their usual business pretty quickly after you shoot.

Where to Shoot a Squirrel with an Air Rifle

If you want to up the challenge or need to be super sneaky, you can pop squirrels with an air rifle. Using an air rifle is a much safer way to control the backyard squirrel population than a shotgun. Just be sure to check local regulations before setting up a neighborhood squirrel ambush.

When hunting with an air rifle, you’ll want to opt for the .22-caliber pellets. While a well-place .177 pellet will definitely send a squirrel to meet his maker, the extra weight of a .22 pellet is more efficient and reliable.

Air rifles are definitely close-range weapons, so you’ll want to keep your shots within 25 yards. Making an accurate head shot is really the only ethical way to harvest a squirrel with an air rifle, so make sure your scope has a spot on zero, and choose your shot opportunities carefully.

Shot Placement with a Bow

Want to take the challenge of squirrel hunting to a whole other level of difficult? Grab your bow.

You can ethically harvest a squirrel with a blunt or judo point to the head.

If you prefer to use a small game point with a narrow cutting diameter, you can aim for the vitals. For a heart and lung shot, place your pin just behind the shoulder, exactly like you would when shooting a whitetail.

Whether you choose to attempt body shots or go for the head, both target areas are only about the size of a golf ball. This makes squirrels one of the most challenging animals to hunt with a bow.

Squirrels are some of the most erratic and acrobatic game animals on the face of the planet. Although it’s often tempting to try a shot at a moving squirrel, it’s better to be patient. Wait for the critter to come to a stop (and preferably turn broadside), so you can make a careful and deliberate shot.

A squirrel knows every single hole in every single tree in the woods. He also knows how to get there fast when he’s hurt. A wounded squirrel will make for one of those holes faster than you can blink. Once inside, he’s likely to lay down and die of his wounds, which means you’ll never find him. It is better (and more responsible) to wait for a solid shot opportunity than rush it and leave an injured, suffering animal to die in a hollow tree.

For many of us old-timers, squirrels were our first introduction to hunting. Our fathers handed us .22 rifles and sent us off into the woods. Today’s kids aren’t usually so lucky. In recent years, small game hunting has declined drastically, possibly due to our obsession with big game (as well as modern helicopter parenting).

Fewer youngsters have the chance to experience the thrill, discipline, and responsibility of hunting small game. As we lose those foundational hunting experiences, we also lose what has been a cornerstone of the outdoor experience plua the invaluable skills and character it develops.

As hunters, we shouldn’t let hunting small game go the way of the dinosaur. It simply has too much to offer beyond a tasty squirrel stew.