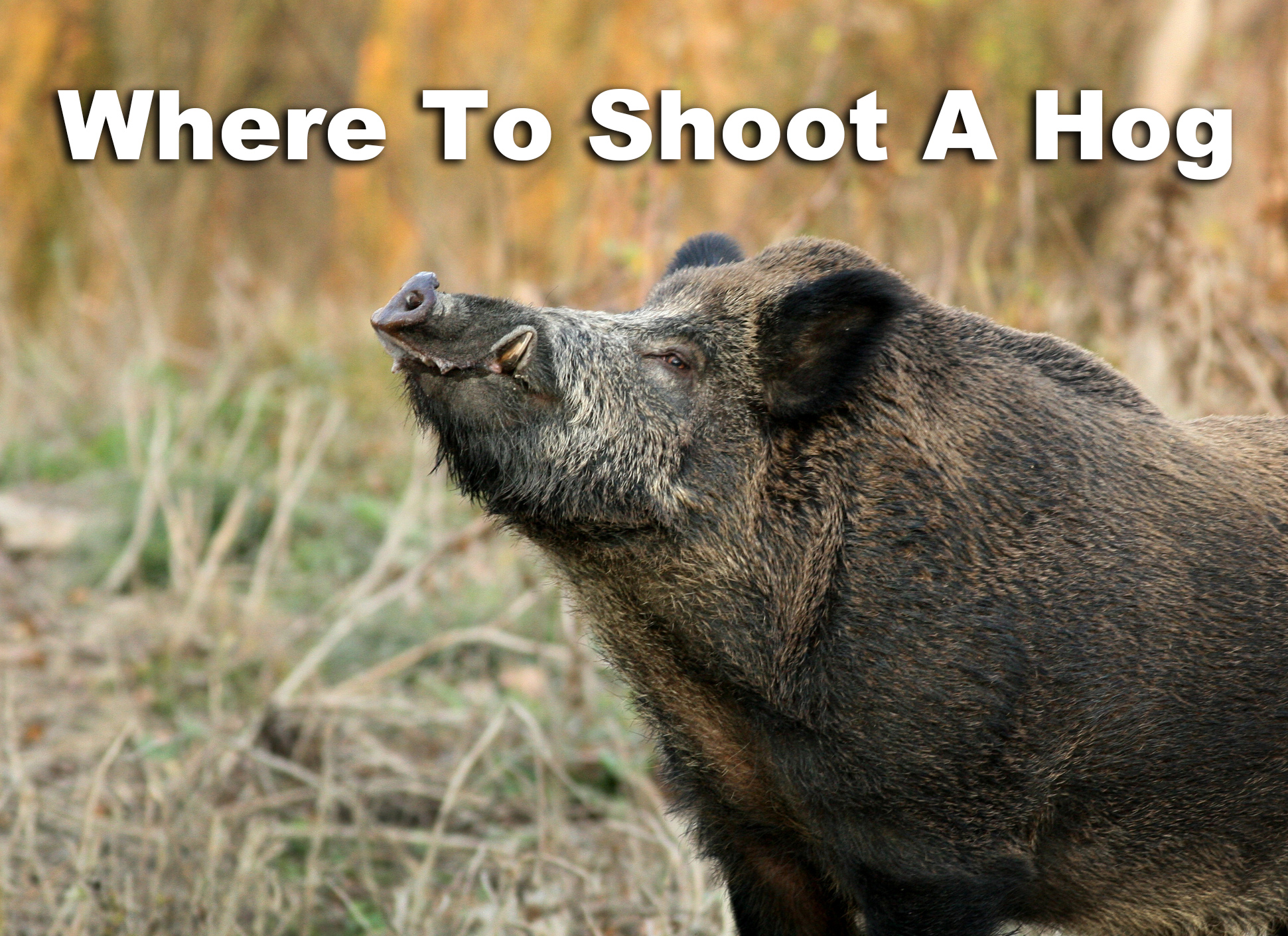 Where to shoot a hog to ensure an ethical and, hopefully, quick kill.

A quick, clean kill is the goal of every ethical hunter, no matter what type of game he pursues. Even when pursuing a nuisance species like the wild hog, a responsible hunter should always strive for a humane kill. A big of that is knowing where to shoot a hog.

Feral swine have a reputation for being difficult to kill. While they are definitely wily and tenacious, they are not completely invincible.

The Problem With Pigs

Feral pigs cause billions of dollars of property damage each year. From destroying agricultural crops to trashing manicured golf courses, wild swine are well-known for their destructive ways.

There are an estimated 6 million wild hogs in the United States, and that number is growing rapidly.

Sows breed year-round. They have a short gestation period of just 15 days, and the average litter size is 6 to 8 piglets. It isn’t hard to understand why the wild pig population is completely out of control.

To make matters worse, feral swine have no natural predators. That means hunting is the only viable way to keep the exploding pig population in check.

There are more reasons to hunt wild hogs than the satisfaction of helping reduce an out-of-control pest population. A successful hog hunt yields an abundance of fresh, mouthwatering wild pork.

The average southeastern wild hog yields approximately 120 pounds of meat. With one kill, you can stuff your freezer with enough pork chops, ribs, ham, and breakfast sausage to last at least until the next deer season rolls around.

Since wild hogs are seen as an invasive species, most states allow hog hunting year-round. If you’re looking for something to do until the regular hunting season opens, hog hunting could be your new favorite pastime. Just be sure to check the local hunting laws before you head to the field to harvest your own bacon.

Caliber Considerations When Shooting A Hog

Ammo is a funny thing. Seemingly ever hunter has an opinion what is best for a given use. For hog hunting, we recommend you don’t go much smaller than .223/5.56 ammo. There are plenty of stories out there from hunters sharing tales of well-placed 17 HMR rimfire rounds taking down boar but there’s not much reason to go that small with your ammo. Many hunters in thick brush will opt for shotgun loads over rifle or rimfire rounds.

Where to Shoot A Hog: Meat Quality Rules

Dropping a hog where he stands will certainly save you the trouble of following a wounded animal and potentially losing the meat. That’s one good reason to aim for a clean kill. However, a long, drawn-out death could also ruin the taste of your pork chops.

A scared and suffering animal experiences a massive adrenaline dump before it dies. That buildup of adrenaline changes pH levels in the muscles which can result in tougher meat. Changes in pH can also cause meat to spoil faster.

Pigs that are killed quickly without undue stress yield higher quality meat. If you crave flavorful pork barbecue, you’ll want to make your kills as quick and clean as possible.

Obviously feral pigs are not deer. However, most hunters heading into hog territory for the first time are experienced deer hunters. Those seasoned hunters often have ingrained notions of shot placement that they bring with them into hog hunting.

Deer hunters are conditioned to aim for the “boiler room” on a big buck. The boiler room is the area that encompasses the heart and lungs. To hit this area on a broadside buck, hunters try to place their shots directly above and slightly behind a deer’s front leg.

Pigs have more compact bodies than whitetails. That means a hog’s heart and lungs sit lower and more forward than those of a whitetail deer.

A hog’s lungs sit directly above where his front legs meet the body. The heart is positioned below and just in front of the lungs. Because the heart is sunk so low in the body, it isn’t uncommon for an off shot to pass directly under the pig.

To further complicate shot placement, wild hogs have thick skin and bony armor that can hinder even a perfectly placed shot. Hogs are fighters. Because boars often clash with other boars, they naturally develop a buildup of cartilage and tissue behind the shoulder blades. This thick shield actually protects a pig’s vulnerable organs from the sharp tusks of other rabble-rousing boars.

If you’re hunting with a broadhead or light caliber bullet, shot angle becomes particularly important. Hit that gristly armor and your shot won’t penetrate deeply enough to damage the heart and lungs.

You’ll need to be patient and wait for a good presentation. The best presentation, especially on a sizable hog, is when the animal is quartering away. 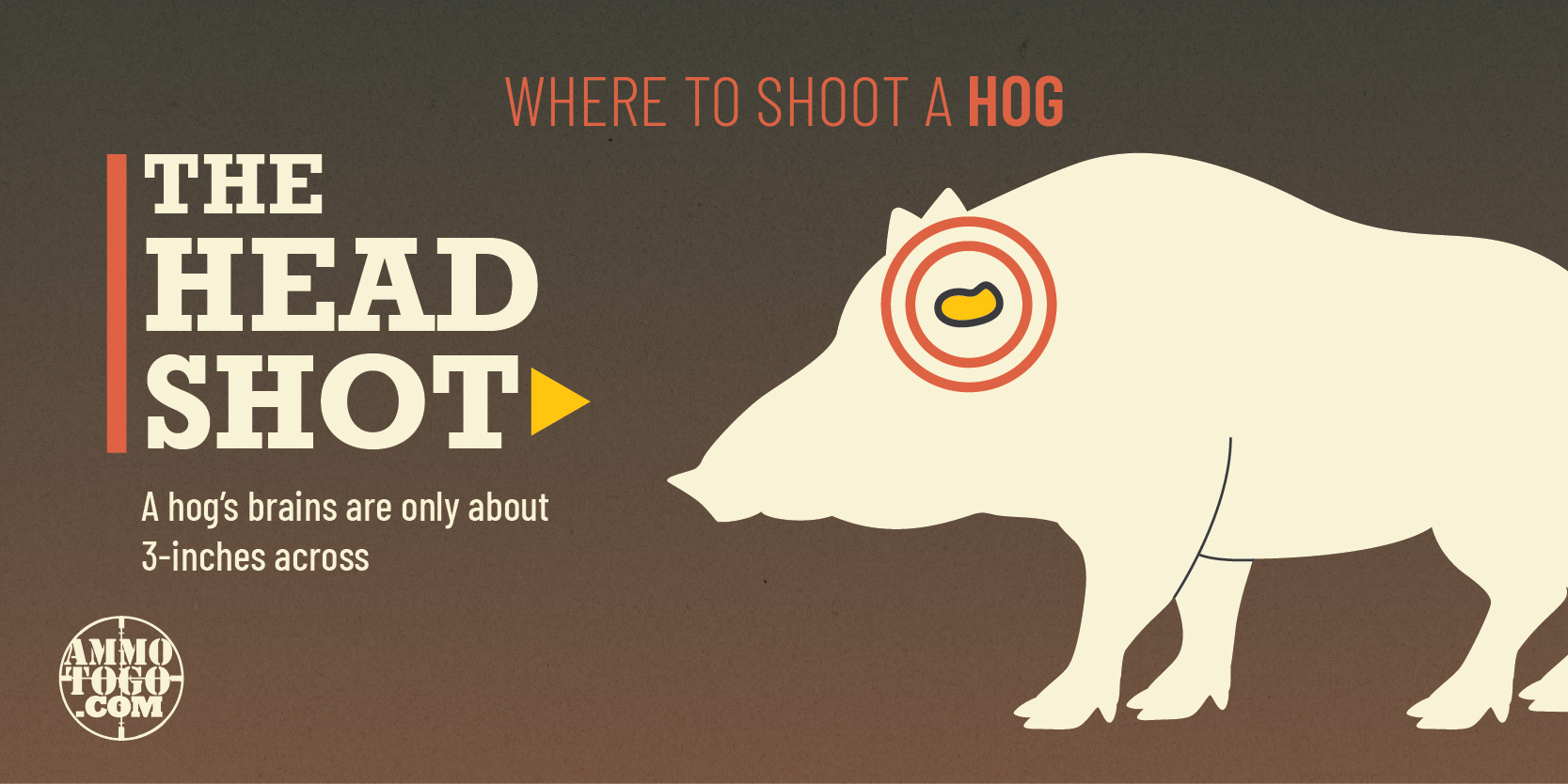 Some hunters claim the best way to drop a big hog is with a brain shot. It’s true that a bullet through gray matter will kill instantly without damaging any ham in the process. However, there are some fundamental flaws to attempting the head shot.

Although feral swine are smart, their brains make relatively small targets. The average hog brain measures only a few inches across. While a skilled marksman could easily punch a stationary target of that size, the pig brain is not a piece of paper.

That small brain is surrounded by bone so thick it makes that hard shoulder plate look like a paper plate in comparison.

A hog’s skull also has sloping angles that can deflect the trajectory of even heavy bullets.

To make the head shot even more problematic, porcine noggins are constantly moving. Modern hogs may not have any natural predators, but they are still prey animals at heart. Like all prey animals, hogs are constantly on the look-out for danger. That means that the target brain is always moving, sometimes erratically, as the animal is constantly reacting to the sights, sounds, and smells of its environment.

Add all of these factors together and a successful head shot becomes more about luck than shooting skill. It’s a gamble most ethical hunters aren’t willing to make.

Although the neck shot can be a bit controversial, it definitely has its benefits. One of the biggest benefits to the neck shot is that it ruins very little meat.

The “kill zone” of a hog’s neck is significantly larger than the “kill zone” of a head shot. It stretches from the point of the shoulder to the base of the ear. Place a heavy, high-powered projectile in the middle of that zone, and you’ll sever the spinal cord, dropping the pig dead in his tracks.

Since even the toughest hog can’t run with a severed spine, you don’t have to worry about tracking a blood trail or losing your meat. Since mature hogs leave sparse blood trials, that is a good thing. With heavy layers of skin and fat, wounds often seal themselves up, resulting in nominal blood loss, even with a fatal shot.

The neck shot is also a pretty forgiving target. Hit high, and your bullet will sever the brainstem or plow right through the brain. Track the shot low, and you’ll split the windpipe, carotid artery, or jugular vein. Both will buy the pig a swift ticket to hog heaven. If the shot strays any higher or lower, and you score a clean miss.

A neck shot can be tricky, however. You need a good broadside angle to really make it work. That neck is dangerously close to the head. One turn and you could end up damaging the pig’s jaw or snout. Either could result in a slow painful death and a pig that you probably won’t recover.

The Heart and Lungs Shot 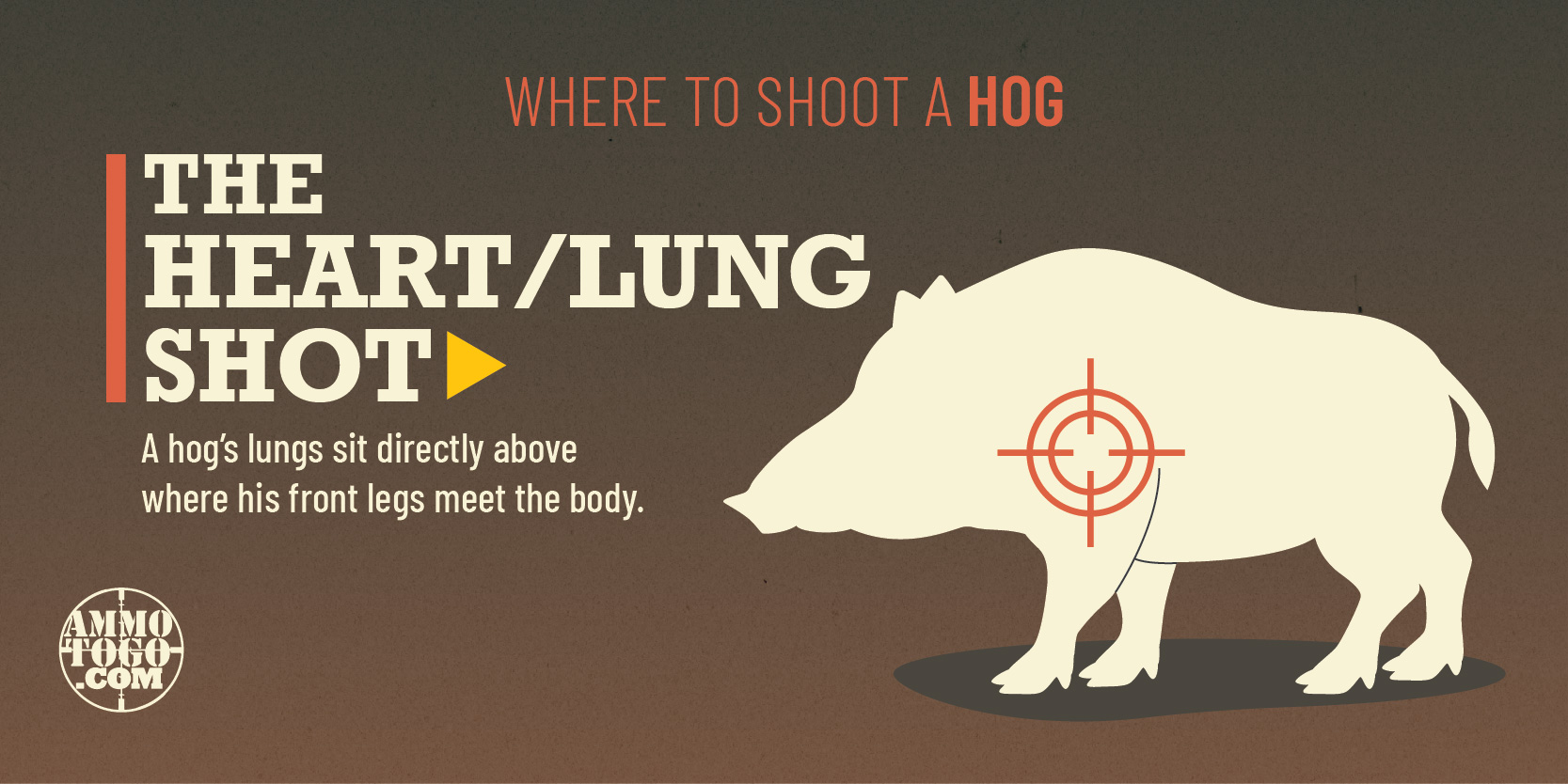 Like with whitetails, the heart and lung shot is considered the money shot on a hog. When executed properly, this shot is highly effective and does little damage to the meat.

A clean heart/lung shot may not kill instantly. However, a good shot to this area rarely requires extensive trailing. A bullet or broadhead to the cardiopulmonary system shuts down the flow of blood to the rest of the body. With a proper supply of oxygenated blood, vital systems shut down, resulting in a fairly swift demise.

The heart/lung vital area is a relatively large target, measuring approximately 8 inches across on the average hog. When compared to the head and neck, the heart/lung area provides a pretty stable target. In other words, it’s the part of the pig that moves around the least.

Hog hunting is one way for serious hunters to get out in the woods and do what they love during the off-season. However, it’s important to remember that feral pigs aren’t deer. If you try to shoot them like whitetails, you’re just going to walk away frustrated and empty-handed. That’s why it’s important to know where to shoot a hog.

Making a quick, humane kill is the responsibility of every good hunter. The animals deserve that much respect, even if it is a nuisance species. To do that, you should make your shots as carefully and deliberately as possible.

Patience can be difficult, especially when you’re staring down a massive razorback. However, if you aren’t certain you can put the shot where you need it, it’s okay for you to let the hog walk. You can always go back and hunt him another day.

Where to Shoot a Squirrel