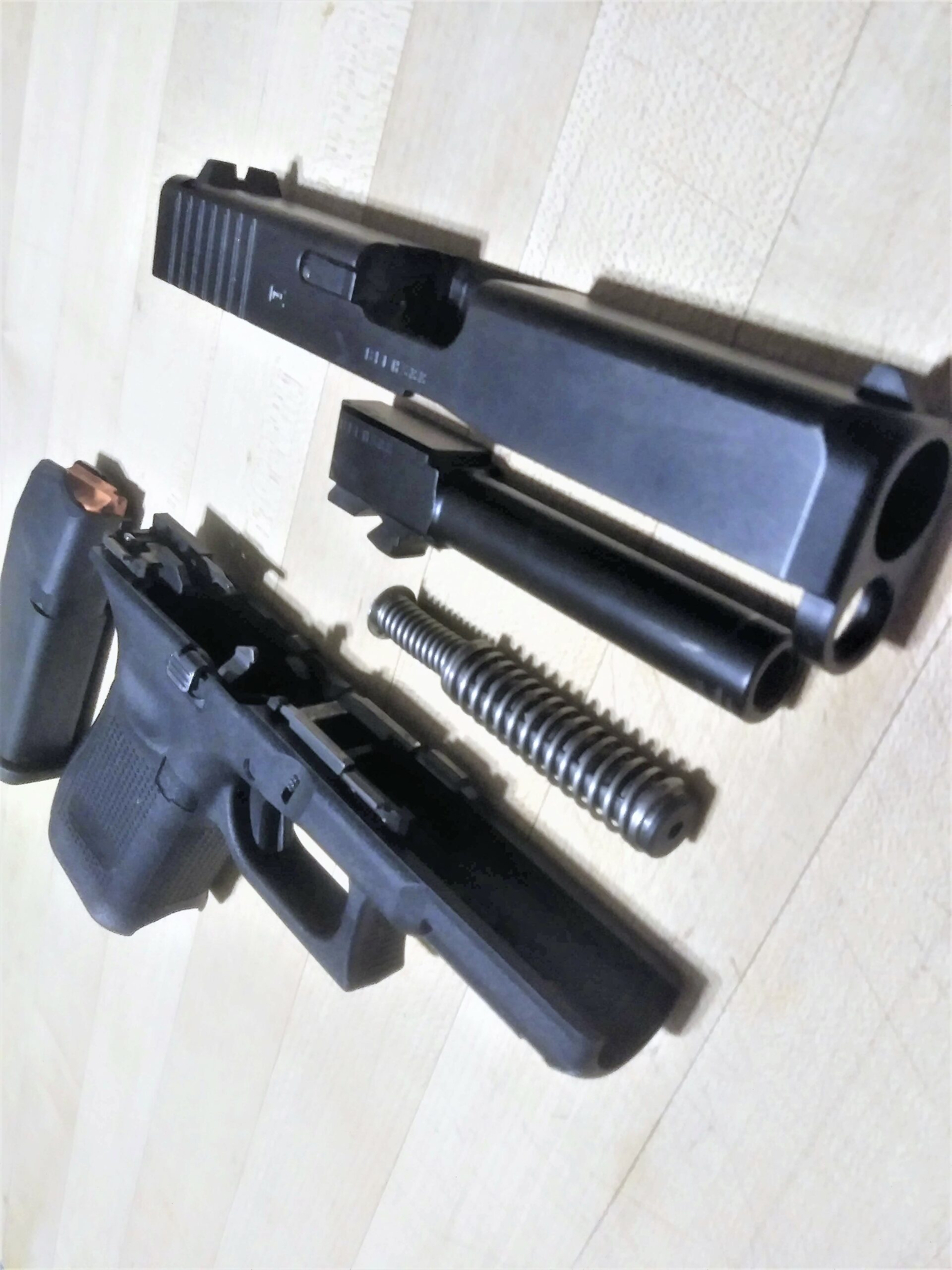 A look at the parts of a handgun – what makes a firearm work and what the differences between a semi-auto pistol and revolver are.

There is a lot of misinformation about firearms and their capabilities wafting around news outlets and social media these days. For gun people, it can be frustrating to hear friends, reporters, and even lawmakers spread false information. However, it isn’t completely their fault. Most people didn’t grow up around firearms and as a result, often lack basic gun knowledge.

For those new to shooting, finding basic information can be a challenge, and modern gun culture isn’t much help. Although it’s easy to understand why gun guys (and gals) can be wary of non-shooters (or even inexperienced shooters), the best weapon we have against inaccurate information is education.

In an effort to inform the masses, here is a basic explanation of the parts of a handgun. Although this article is aimed at educating new shooters, feel free to forward it to misinformed neighbors or local legislators (just make sure you do so tactfully!)

What is a Handgun? 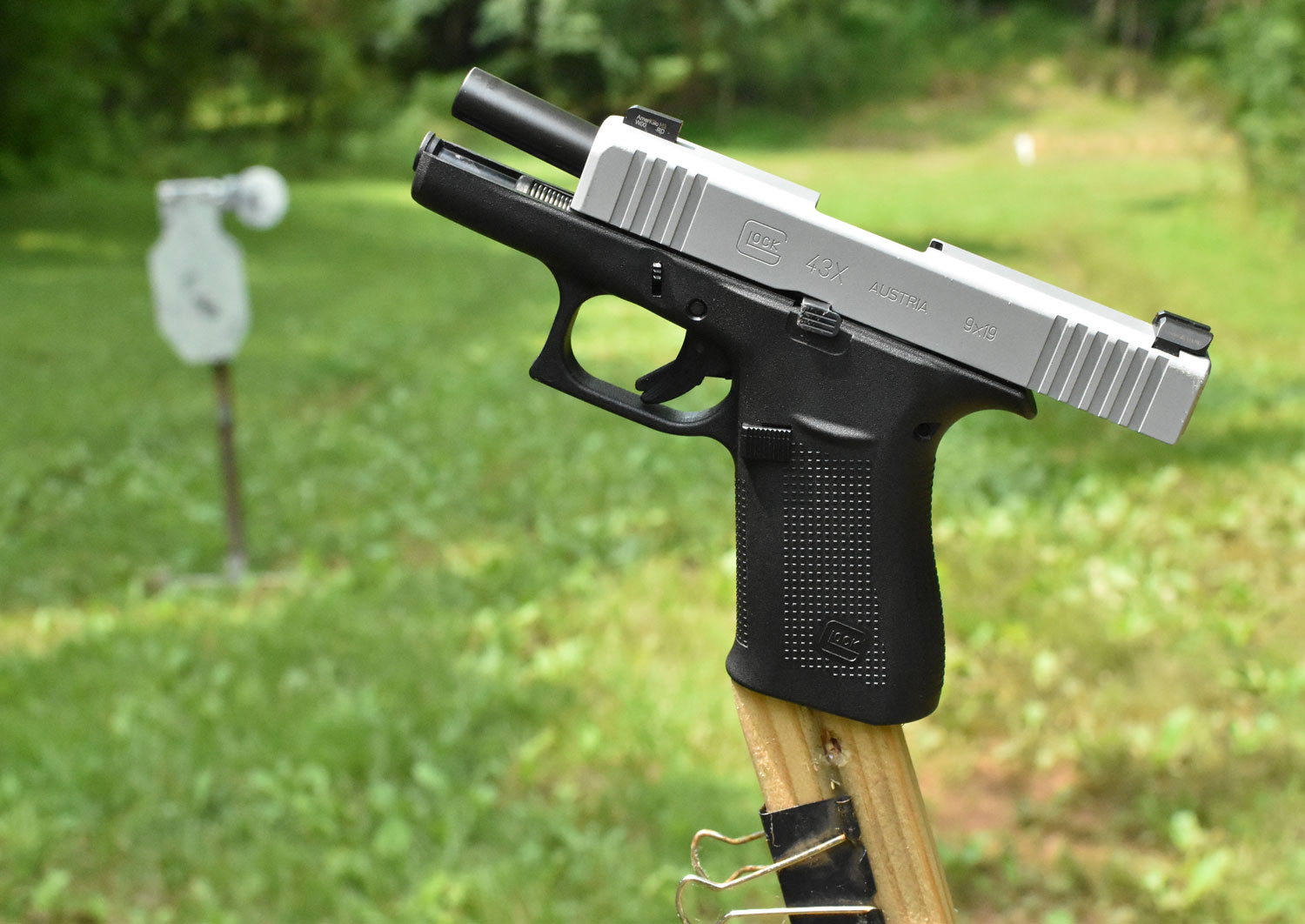 The basic definition: A handgun is a short firearm designed to be held in one or two hands when shooting rather than braced against the shoulder.

There are three basic types of handguns:

Of course, you’ll find there are plenty of variations within each type.

The very first handguns were muzzleloaders. You load these historic weapons from the muzzle (the open end of the gun’s barrel). This is distinct from modern high-tech handguns that you load from the breech (the part of the barrel closest to the firing mechanism).

To get a clear image of a muzzleloader handgun, think Pirates of the Caribbean. In the movie, Captain Jack Sparrow carried an English flintlock. In addition, Sparrow’s crew used blunderbuss flintlocks. Both of these stereotypical pirate weapons are muzzleloader handguns.

Parts of a Revolver 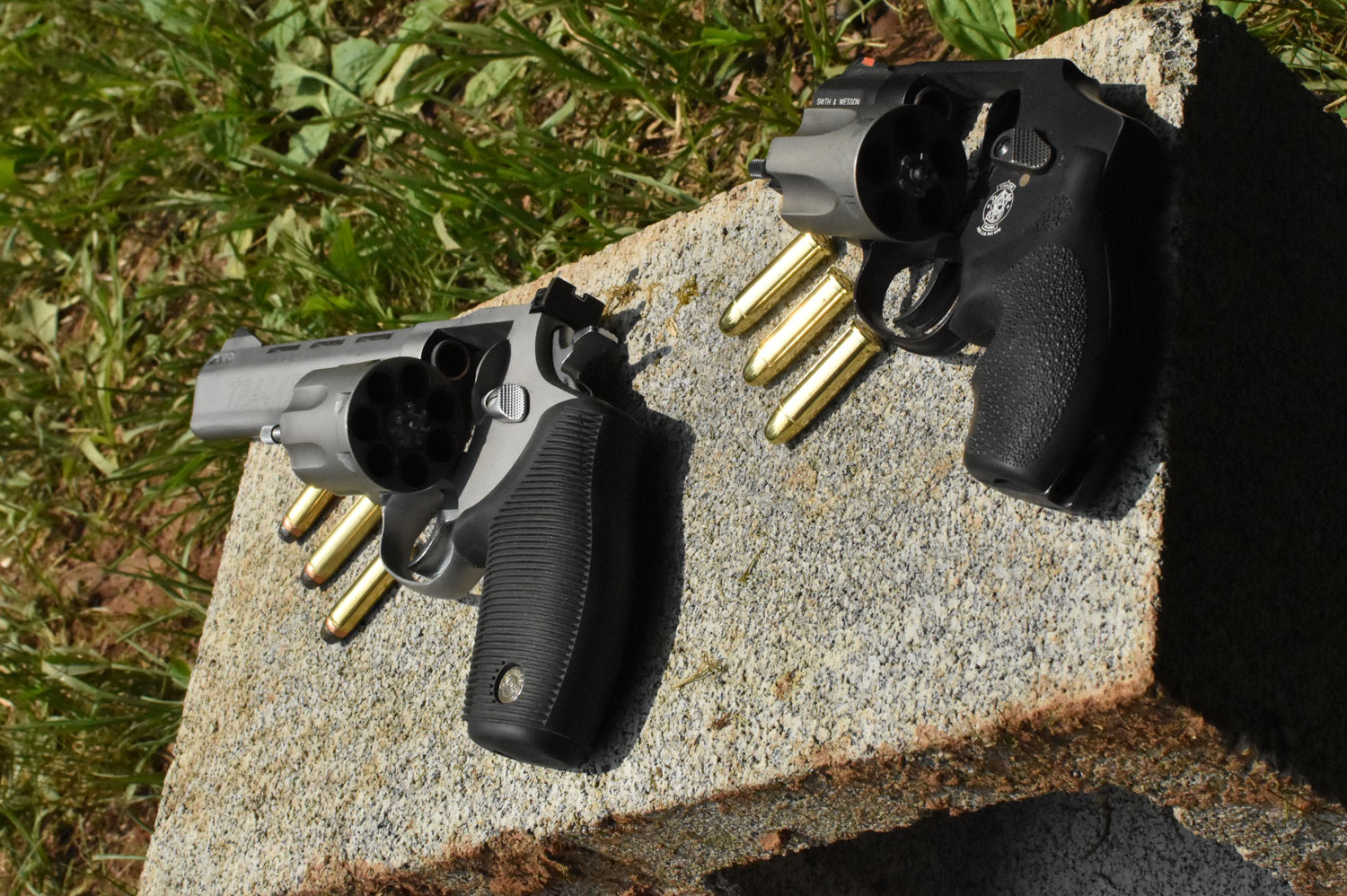 A revolver is a handgun with a revolving cylinder that contains multiple chambers.

The emblematic cowboy gun, the revolver’s widespread use is attributed to Samuel Colt. He patented the mechanically indexing cylinder in 1836. Unlike the muzzleloader, you load a revolver from the breech. this lets you fire multiple rounds without reloading.

Basic Parts of a Revolver

Grip – The portion you use to hold the firearm. The grip is usually ergonomically designed to help with proper hand placement and shooter comfort.

Trigger – The lever you press with your finger that initiates the weapon’s firing sequence.

Trigger Guard – The curved piece that makes a protective ring around the trigger area. The guard prevents shooters from pressing the trigger accidentally.

Hammer – Just like a carpenter’s hammer, the hammer on a revolver is designed to strike. When the trigger is pulled, the hammer makes contact with the firing pin and drives it into the cartridge primer. (In some weapons, the hammer strikes the primer directly.) This causes the primer to explode and ignite the propellant, initiating a chemical reaction that builds pressure and propels the bullet down the barrel and out the muzzle.

Firing Pin – A hardened pin that, when struck by the hammer, impacts the primer of a cartridge. This initiates a chain of events that discharges a bullet.

Cylinder – Found only in revolvers, the cylinder holds all loaded cartridges. It revolves around a central axis and contains multiple chambers that align with the barrel for firing.

Barrel – The metal tube the bullet travels through when the handgun is fired. The barrel contains the rapidly expanding gases created when the powder is ignited. The pressure produced by these gases propels the bullet forward, out the muzzle, and toward the target.

Sights – Most revolvers have a front and rear sight that must be properly aligned for accurate shooting.

Parts of a Semi-Auto Handgun 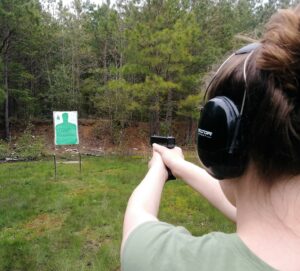 The terms “handgun” and “pistol” are often used interchangeably. However, true gun nerds know that while a pistol is always a handgun, a handgun isn’t always a pistol. To explain the riddle, a “pistol” is more specifically defined as a handgun with only one chamber integral with the barrel. This definition distinguishes pistols from revolvers, which are also handguns.

So basically, a pistol is a specific type of handgun. Calling a revolver a pistol would be like calling an oak tree a pine. Sure they are both trees, but they are very different types of tree. Most firearms experts make a technical distinction that defines the pistol as a subset of the broader category of handguns.

Basic Parts of a Pistol

This is a basic explanation of the parts of a modern pistol. Of course, don’t use our words in place of manufacturer’s instructions. Be sure to review all relevant information from the firearm manufacturer before loading, shooting, or disassembling your weapon.

Grip – Like with a revolver, a pistol’s grip is the portion you hold when shooting. However, the grip on a pistol also serves another purpose: housing the magazine.

Magazine – The magazine holds multiple cartridges until they are fed into the action. Magazines can be detachable or an integral part of the firearm. You should never confuse a magazine with a “clip.” A clip is a storage device that makes it easier to insert ammunition into the magazine. Though the uninformed often use these terms interchangeably, the simplest distinction is a clip feeds the magazine, while a magazine feeds the weapon.

Magazine Well – Also called a “magwell,” the magazine well locks the magazine into place so the cartridges can feed properly into the chamber. Some manufacturers specialize in aftermarket magwells. They provide wider, beveled openings that are slightly flared for faster reloading.

Takedown Lever – Usually a wing of metal attached to a pin. The lever retains the slide, bolt, or barrel. It allows the firearm to be disassembled.

Slide – On most semi-automatic pistols, the slide is the part that moves during the operating cycle, sliding in a back-and-forth motion. 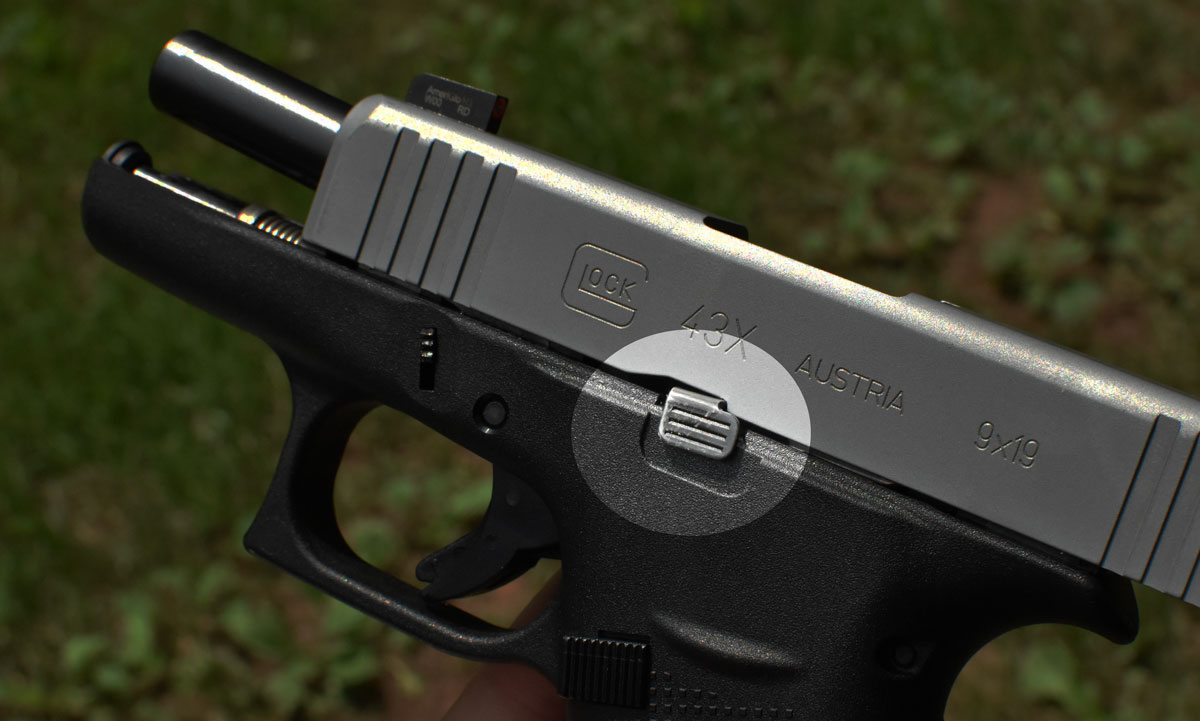 Slide Stop – You can also call this a “slide lock” or “slide release.” This feature locks the slide back when the last cartridge in a magazine has been fired.

Receiver – This is the part of a pistol that “receives” the ammunition. The receiver houses the weapon’s internal components, including the hammer, action, and firing mechanism.

Action – Like the name suggests, this is the part of the firearm where all the action happens. This term encompasses all the moving parts involved in the loading, unloading, and firing of the weapon, as well as the discharge of the empty case.

Extractor – After you fire a cartridge, the extractor lifts or removes the spent brass case from the firing chamber and sends it through the ejection port.

Ejection Port – Spent casings exit the receiver through this opening.

Firing Pin – The hammer drives this hardened pin into the cartridge, causing the primer to explode and ignite propellants in the cartridge.

Barrel – The tube the bullet moves through. Expanding gases propel the bullet through the barrel toward your target. Just like a revolver, the barrel of a pistol is rifled. It forces the bullet to spin as it exits for increased accuracy and velocity.

Sights – Most pistols have a front sight and a rear sight. The front sight may be simple metal or made of high-tech polymer, fiber optic, or some glow-in-the-dark material. To shoot accurately, the shooter must line up the front sight post in the middle of the notched rear sight, and place the front sight over the intended target, before pulling the trigger.

Safety – A mechanism designed to prevent the accidental discharge of a firearm. It may be a button or sliding device located near the trigger or situated on the grip of the handgun. Not all handguns have an external safety. On some models, like Glock pistols, the safety is deactivated only when the trigger is pulled.

Trigger – Like on a revolver, this is the lever you press with your finger that starts the firing sequence.

Trigger Guard – This is typically a curved piece that protects trigger area. Keep your finger outside this area unless you intend to shoot.

Because of the variety of weapons in each category, be sure to use the owner’s manual for more detailed information about specific handguns. Also, remember to always follow the basic rules of firearm safety: