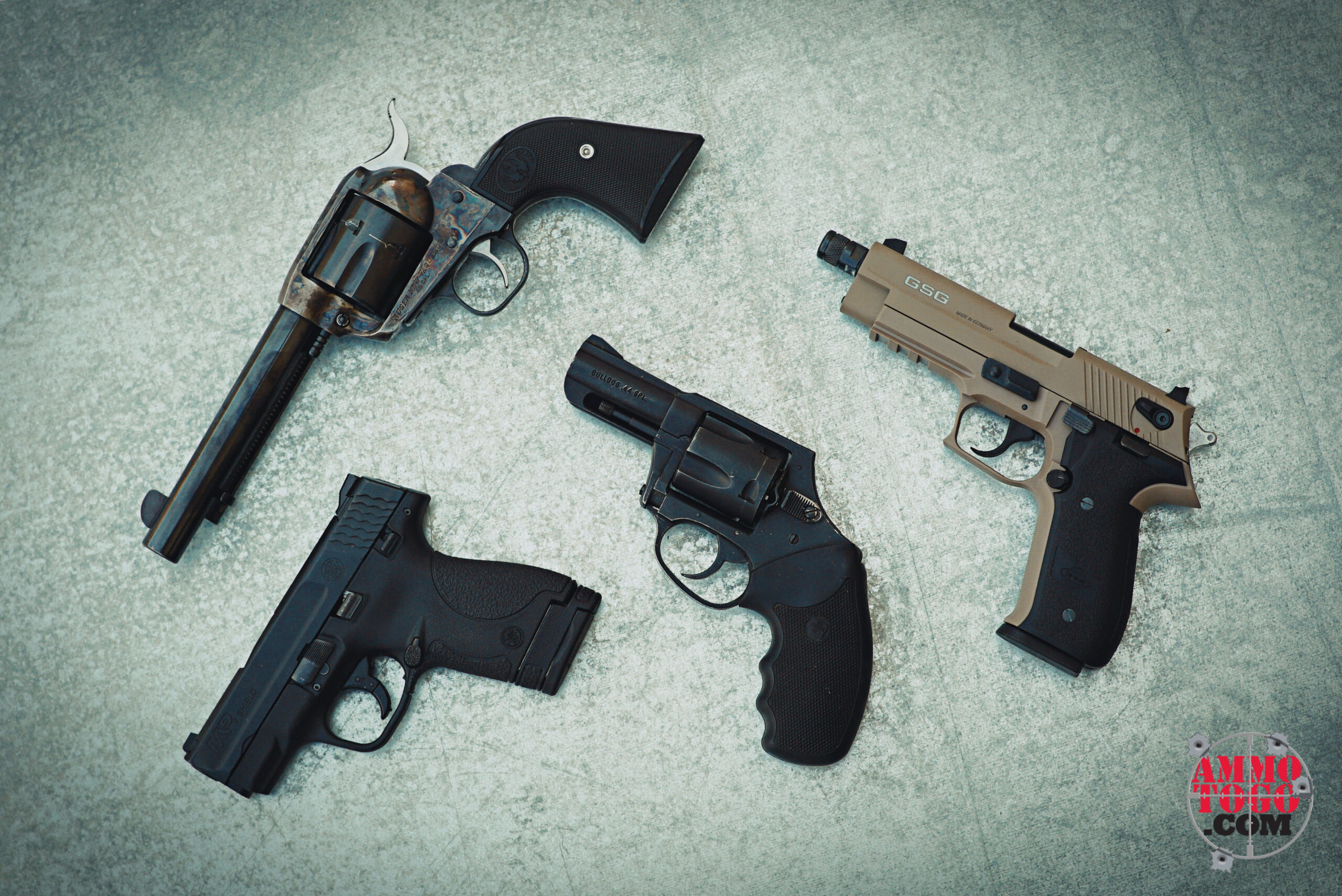 If you’ve ever shopped for a pistol, one of the first questions you’ve probably had to answer is if you want a double action or a single action firearm. It may not matter once you get to the range but there are certain factors that could have you happy you knew the differences between single and double action pistols before buying.

Handguns are manufactured in a wide variety of shapes, sizes, and intended purposes. Understanding the differences between many of today’s popular handguns will help you make an educated decision about which firearm works best for you. The best way to look at how handguns stand apart starts with understanding the action and method of fire.

A gun’s action is the method by which it operates in relation to firing it’s ammunition. How a firearm loads, locks, fires, and extracts the cartridges varies based on the type of action. Some of the most common actions in handguns are double action and single action. 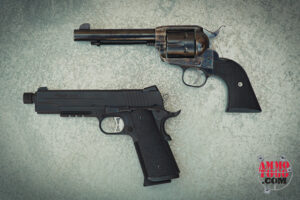 For Single Action setups, the trigger performs a single function. Pulling the trigger, causes the hammer to drop. This means that the hammer must be manually cocked in order for the firearm to discharge a round. The accuracy of a SA handgun may be better than a DA handgun. The trigger pulls of a SA are generally very light and have a very short travel distance. This is where the term “hair trigger” comes from. It does not require much pressure to fire a SA firearm, resulting in better accuracy.

SA handguns also come in various forms, but still tend to be generally more “simple” than double action triggers. In theory, that means less can go wrong or malfunction. Like many other SA pistols, the classic wild west style Colt Single Action Army fires a round every time you manually cock the hammer and pull the trigger.

Some SA’s though also come in a semi-automatic (autoloader) version, as with most 1911’s. You must manually rack the slide to cock the hammer for the first shot. The recoil of each subsequent shot cycles the next round into the chamber, leaving the hammer cocked. When carrying a SA 1911 style handgun, practicing disengaging the safety when drawing to shoot is imperative. 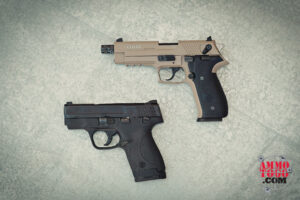 When it comes to revolvers and other handguns that are considered Double Action, pulling the trigger causes two functions to occur. First, the hammer is cocked back. Second, the hammer is released, causing the firearm to discharge. DA trigger pulls tend to be heavier than SA and have a longer travel distance. With extra force needed to pull a DA trigger, accuracy can potentially suffer as you may find yourself pulling the handgun off target slightly to compensate. With practice of finger placement on the trigger and overall familiarity of the firearm, you can effectively use a DA handgun without sacrificing accuracy.

Most DA revolvers can also be fired SA by manually cocking the hammer back. The majority of revolvers, such as the Ruger GP100 and Smith & Wesson Model 10 are of just a few examples.

Although, DA/SA handguns do have a different trigger reset after the first round is fired. The first shot requires the shooter to pull the trigger through a longer arc before the handgun will fire. With each subsequent shot, the trigger will only reset to about halfway. For some, this difference in reset distance requires some getting used to.

You must also learn to decock a DA/SA handgun after firing if there are still rounds in the cylinder or magazine. Decocking a loaded handgun may scare some people off. Although, if you understand your handgun and practice with it, the task will come naturally.

Some revolvers like the Smith & Wesson Model 642 however, are Double Action Only, where pulling the trigger will fire a round every time. This reliable setup allows the shooter to safely operate the firearm without the need of the slightly outdated, light single action trigger pull.

Hammerless revolvers like the S&W 642 are foolproof and very popular among those who don’t like an exposed hammer that could possibly catch on clothing or other items.

Semi automatic handguns like Glocks and other popular striker fired designs are generally marketed as DAO firearms, but these guns really live in a grey area between double action and single action. 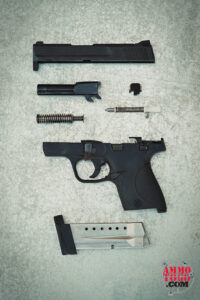 Now that we’ve covered the basics of Double Action and Single Action handguns, let’s break it down ever further to understand how hammer firing differs from striker fired handguns.

In a hammer fired handgun, the hammer relies on a spring to drive it. The hammer pivots, striking the firing pin, in return hitting the primer.

Striker fired systems differ in the function and manufacturing of the firing pin. A compressed spring drives a striker that acts as the firing pin to hit the primer. Often there is a second, smaller spring in front of the striker to return it to rest.

In striker fired designs, the firing pin is half-cocked after the slide is manually racked. Pulling the trigger then fully cocks the pistol before discharging a round. Basically, you get the light, consistent trigger feature of a SA firearm without the troublesome hammer of a DA to deal with.

Conceal Carry and Self Defense

Double Action, Double Action Only and Double Action/Single Action firearms are used by shooters everyday for personal defense. Understanding the pros and cons can help you make an educated decision about which firearm works best for you and your situation.

A downside to operating a true SA firearm as your go-to self defense weapon is having to manually cock the hammer for every shot. This makes operating the firearm more time intensive when every second counts. So, unless you’re a reincarnation of Wyatt Earp, a SA revolver wouldn’t be a good first choice as a self defense weapon today.

An exception to the belief that you shouldn’t carry a SA handgun for self defense is the widely used 1911 model handgun. These SA firearms allow you to chamber a round, cock the hammer, and then engage the external safety. This allows you to carry the handgun “cocked and locked”.

Some people still consider carrying a DA hammer fired handgun to be safer than a striker fire option. Though, there has been a number of cases over the years of hammer fired handguns accidentally discharging due to improper or careless use. This idea comes as a result of the longer trigger pull, potentially deterring against accidental discharges. Although the hammer from a DA revolver still has the chance to catch on clothing.

Some may think of the use of a DAO revolver for personal defense as limiting or foolish, while others see it as a benefit in safety and reliability. Without the need of a hammer protruding from the firearm, the threat of an accidental discharge by the hammer being caught on clothing or other items, is eliminated. The trigger pull is consistent and doesn’t require much concentration from the shooter in a self defense situation.

Each type of handgun operation has their tradeoffs. There is no right or wrong choice when it comes to what type of handguns you should own or carry. It all comes down to personal preference and what you feel the most safe with. Continued training and understanding how your firearm functions are key steps in firearm safety. Let us know your thoughts and share some of your stories in the comments below.

Getting a CCW – Steps to a Concealed Carry License