A side by side look at M2A1 vs M2A2 ammo cans including some torture testing to see just how much weight each can hold.

Spoiler alert: There’s not a huge difference between M2A1 vs M2A2 ammo cans. But there is a difference.

Origins of the M2A1

The M2A1 ammo can was adopted by the U.S. Armed Forces during the 1950s. Although it is often referred to as a .50 cal ammo can, the M2A1 is commonly used by the military and civilians alike for storing a wide range of small arms ammunition including 5.56×45, 9mm, shotshells – you name it.

The M2A1 is an excellent ammunition storage and transportation solution. It is a large receptacle capable of storing 100 linked 50 BMG rounds, 1,200 loose 5.56 rounds, 2,200 loose 9mm rounds, or 140 loose 12 Gauge rounds. The M2A1’s seam-welded steel construction soaks up considerable abuse without risking harm to its contents. The can’s hinged, collapsible handle is easy to carry, and its latch closes tightly to prevent moisture and debris from contaminating its contents.

The M2A1 ammo cans feature an integral rubber gasket. When its lid is fully closed, the gasket presses against the M2A1’s steel rim to render the can virtually waterproof. You can submerge a closed M2A1 in water for 12 hours – and probably even longer – without risking getting its contents wet.

But here is the problem with the M2A1 design. If you stack several cans on top of one another or otherwise place a lot of weight on top of an M2A1, the pressure will gradually weaken the gasket and compromise its ability to seal out water. This isn’t a problem if you store M2A1 cans inside their original wooden crates. But without them, the M2A1’s gasket risks breaking when subjected to prolonged heavy pressure.

Introducing the M2A2 Can 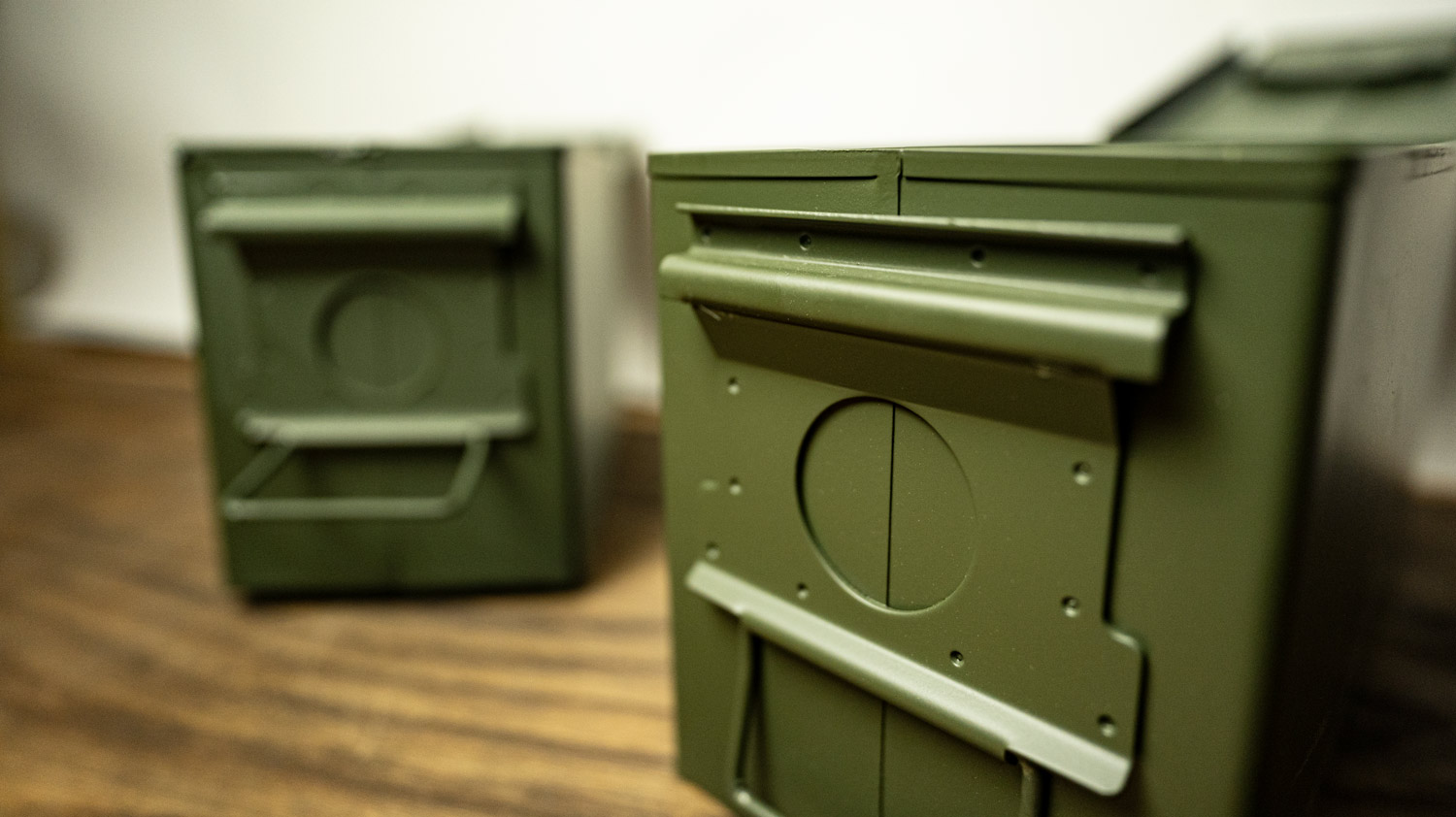 The newer M2A2 ammo can solves this problem with the addition of a metal support bracket to its latch assembly. This prevents the gasket from getting crushed under pressure, which in turn preserves the M2A2’s ability to seal out moisture. If you’ve got limited space and wish to stack your ammo cans in a tower formation, the M2A2 offers greater peace of mind that your ammo won’t suffer from corrosion.

But how much of a difference does the M2A2 make when it comes to bearing weight?

We set out to get an answer.

Let’s say right up front, our tests surprised us a bit. You can easily stack more weight on each can than the typical civilian would dream of stacking ammo cans. So, even if you’re a serious prepper, you probably won’t push these cans past their limits.

Our tests started using free weight plates in a backroom at our ATG offices. There, we started to stack the weights on top of the cans, aiming to distribute the weight as evenly as we could along the top of the can.

But the 540 pounds we stacked on top of the M2A1 and M2A2 wasn’t enough to do any damage. The lids still functioned properly and there was no warping of the can walls.

For reference, a case of .223/5.56 ammo typically weighs roughly 30 pounds. Some heavier loads will be slightly more, smaller bullets will weigh slightly less. At this point in our tests, we felt pretty confident the M2A1 will give you enough strength to allow you to stack at least 15 cans on top of each other.

But what’s the actual limit these cans can hold?

Rather than buy another quarter ton of free weights, we looked for a smarter solution. That took us to the warehouse and the home of a small hydraulic press.

We loaded the M2A1 can onto the base of the press. Using a metal plate at the top, we attempted to distribute the weight as evenly as we could on the lid of the can.

Then, we got cranking.

Results of the M2A1 Test

After several cranks, we hit the 2000 pounds of pressure mark at the top. We could see a cut starting to form where the steel plate of the press was forcing its way through the lid.

Then, at about 2300 pounds of pressure, the wall of the can itself began to give way.

The way the press works, it’s difficult to get a precise sense of what weight was the tipping point. The most weight displayed by the press was 2980 pounds but that was only for a fraction of a second.

Results of the M2A2 Test

So, does the M2A2 really deliver any more strength? (If the M1A1 gives you the ability to stack nearly 60 cases of ammo on top of it, do you really care?)

For curiosity’s sake, we put the M2A2 into the press and started to crank the handle.

After cranking up to about one ton of pressure, the can appeared to be holding steady and giving up no ground to the press. Then, another crank and we witnessed the display top out at 2386. At that point, the side of the can started to buckle, the lid sank down, and it was clear the can was done. 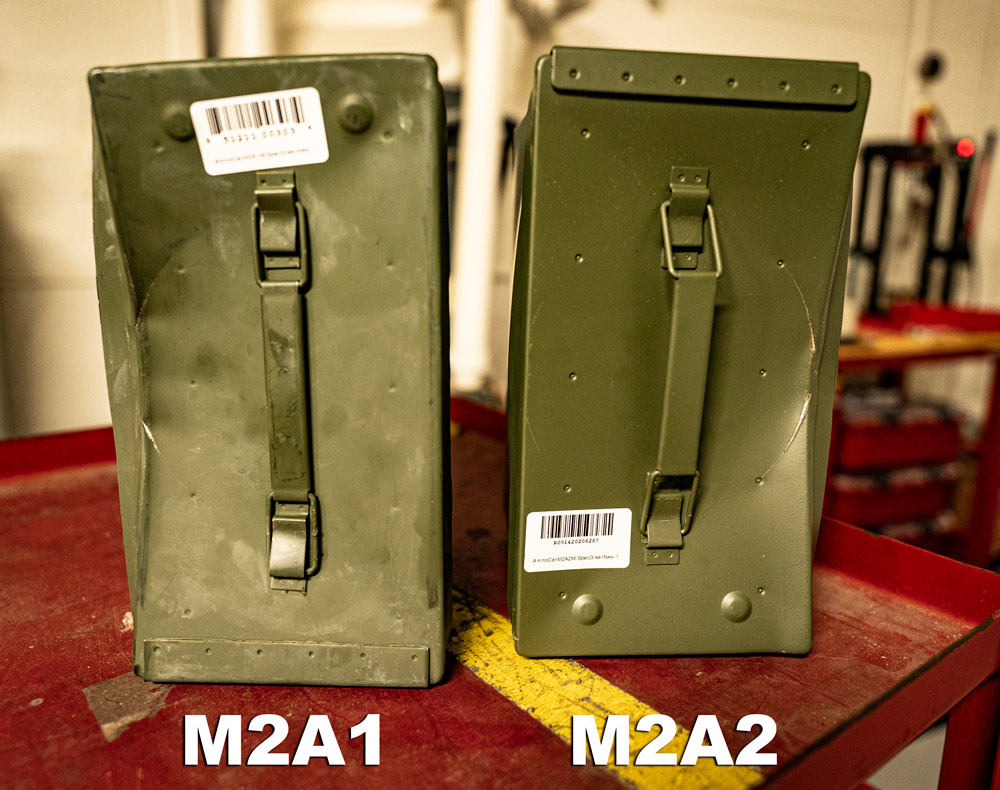 Opening up the lids of the cans, you can see where the gasket of the M2A2 did appear to stick a little closer to the original design. In both cases, we could easily open the cans with our hands but the seal was obviously gone.

Other M2A1 vs M2A2 Differences

In terms of appearance, there’s not much difference to think about. The modern M2A2 doesn’t have the classic yellow stenciling like you’re used to seeing on older military surplus ammo cans. This is because the Lake City Army Ammunition Plant, which manufactures the M2A2 has updated their labeling equipment, which prints cans with sleek white digital letters. Ooh-la-la!

Look For More M2A2 In The Future

M2A2 cans are still relatively hard to find but we’re seeing more of them. The military introduced them around the mid-2010s, so our Armed Forces haven’t had very much need to unload M2A2 cans onto the military surplus market.

As time goes by and the Army continually swaps out their old equipment, the M2A2 with its pressure-resistant gasket will eventually become far more available. Even a certain political party which shall go unmentioned here will have a difficult time arguing that ammo cans with protective metal brackets present a danger to the public.

Whatever you choose, we’ll continue to carry both varieties of ammo cans for sale at ATG for as long as we can source good quality storage options.