Had a busy season? That’s great. But now it’s time to give that shotgun a good cleaning for the offseason. Follow along with us as we work through a step-by-step guide that shows how to clean a Remington 870 shotgun.

The Remington Model 870 was first introduced to the public in 1950. Since then, it has become one of the most popular (perhaps “the” most popular) pump action shotgun ever to hit the American outdoors. Versatile and dependable, the M870 is near-perfect for every shooting application, including clay and wing shooting, big game hunting, tactical applications, and home defense.

These shotguns were made to get dirty and take a beating in the field (probably why my dad chose to hand me one). However, they still need a little TLC every once in a while to make sure they stay fit to hand down to our own kids.

If you’re still getting acquainted with the Remington Model 870, you’ve come to the right place. Heck, even if you’re familiar with this popular shotgun, you might find a useful tip in the paragraphs that follow. We’re going to walk you through how to clean a Remington 870. That means we’re going to disassemble, scrub, lubricate, and re-assemble America’s favorite scattergun.

My dad used to clean his shotgun in the living room. He would sit in his easy chair with a towel across his lap and a metal TV tray to hold his gun cleaning kit. Don’t do this! Unlike you and me, my father had superhuman gun-cleaning skills. Those of us who are mere humans need to be more careful.

Before you pull out the M870, find a table, work bench, or other large flat surface to work on. A high flat surface is preferable. Not only will it help prevent back pain caused by leaning over your surface, it will also keep curious kids and pets from getting in the way.

Gather Your Cleaning Tools and Supplies

You don’t want to be in the middle of cleaning your gun only to have to get up and hunt down some essential tool. Be sure you have everything assembled and ready to go before you start. You will need:

With your cleaning area and supplies ready, you can pull out your M870. The first step to cleaning any weapon is to check, double check, and then triple check that it is unloaded. If possible, have a friend or family member give it a second look. Plenty of people have been injured by “unloaded” guns. You can never be too careful.

Once you have confirmed your shotgun isn’t holding a few forgotten rounds of buckshot, it is time to get down to business.

Step One: Remove the Barrel

Find the magazine cap (It’s located under the barrel where the pump handle stops when moved completely forward). 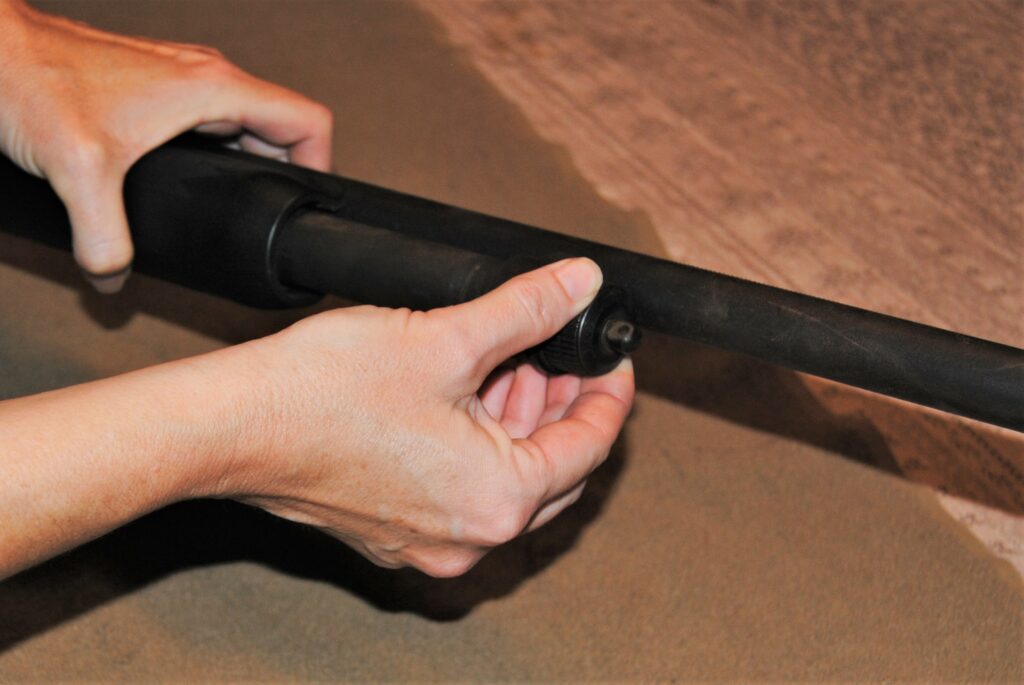 Grip the magazine cap firmly and unscrew it by rotating it counterclockwise. Be sure to keep some pressure on the magazine cap as you unscrew it. The tube is under some spring tension and you don’t want the spring launching itself across the room.

Set the magazine cap, magazine follower, and spring assembly aside on your work surface.

Firmly grip the barrel. It should pull off with a simple tug. Set the barrel aside.

Turn the shotgun over and locate two metal, spring-loaded strips inside the receiver (think where you load the shotshells). Sometimes these strips can be a bit stiff and need some wiggling and finagling.

Once you get the strips to release, pull the forend assembly off the rest of the shotgun. The bolt and bolt carrier will come out as well.

The forend will also slide off. Set everything aside.

ProTip: Make sure the safety is on to prevent the hammer from accidentally striking your finger and causing your kids to hear a slew of words their grandmother would disapprove of.

You will need a pin punch and a small hammer for this step. In a pinch a wooden golf tee works well and won’t scratch your gun’s finish.

Lay the shotgun on its left side. Use your punch (or golf tee) to tap out the two pins above the trigger housing.

Once the pins are out, remove the trigger group from the receiver.

Don’t be afraid of using too much cleaner. If you’ve done a lot of shooting, there will be serious built-up residue and debris. If all that that crud isn’t removed, it can have a negative effect on the integrity of the weapon’s steel.

Use a solvent or degreaser designed specifically for firearms. Be generous on areas with heavy buildup. Spray down the receiver, bolt and bolt carrier, and both ends of the gun barrel.

Check your forend assembly rails for any grimy build up. Unless you’ve done some serious shooting since your last cleaning, there isn’t likely to be much. You should be able to simply wipe this part down with your microfiber cloth. However, if there is a lot of residue, don’t be afraid to spray it with some cleaner before wiping it down.

I like to start with the trigger group while the dirtier components are soaking in solvent. If it isn’t filthy, you can probably get away with spritzing it with some cleaner and wiping it down. Use your toothbrush if it needs a little extra scrubbing.

If it needs some extra attention, you can lower the hammer to access the internals. Once it is nice and clean, be sure to re-cock the hammer and set the trigger group aside until re-assembly.

Attach the appropriate bore brush to your cleaning rod. Starting at the breech end of the barrel, run the brush down the barrel several times.

Wrap a cleaning patch around your brush, and push it through the barrel, again starting from the breech end. Repeat with clean patches until they come out mostly clean.

If you’re using a BoreSnake, run it through until it comes out residue-free. Be careful that the pull cord doesn’t snag on any rough edges or small parts.

Before moving on, make sure you wipe down the outside of your barrel with a cloth and some cleaner. While it probably doesn’t have any carbon residue, the outside of the barrel gets exposed to moisture and the acidic oils of our hands. You’ll want to wipe those away to prevent corrosion.

Use the toothbrush and microfiber cloth to get the receiver shiny and clean. Give some extra attention to where the forend assembly rails interface with the receiver. This is a common place for build up.

After you scrub the inside of the receiver, use a patch to wipe away any excess fluid.

DO NOT use any cleaners or oil on your magazine. If you see any fouling or debris in your magazine, use a dry cleaning patch to wipe it away.

Wipe down all the surfaces of your bolt and bolt carrier with your microfiber cloth. Use your toothbrush if anything needs some extra scrubbing. 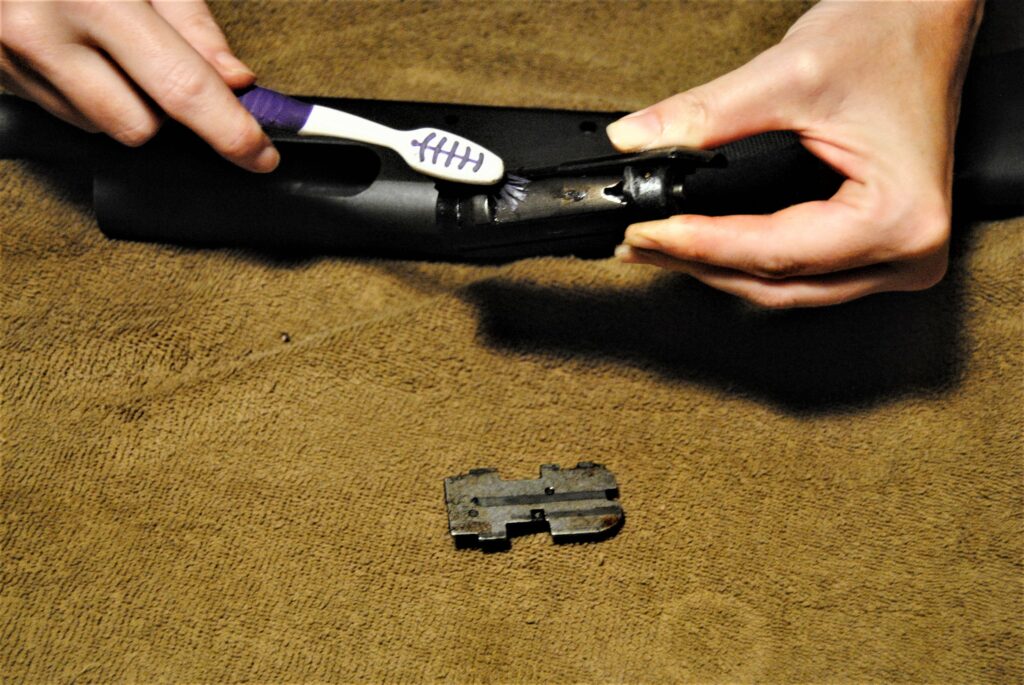 Proper lubrication of your M870 is important to keep your shotgun operating at peak efficiency. It also adds an extra layer of protection between moving components and reduces the wear and tear of normal use.

Although this part is pretty quick and easy, it is one of the most important steps of cleaning your shotgun. Start by placing a small amount of lubricant on the hammer face and hammer spring in the trigger group.

Next place a small amount of lubricant on the rails of the forend assembly. You don’t need much, but make sure it covers the entire rail surface.

Wipe away any excess lubricant with a cloth.

Now that everything is squeaky clean, it’s time to put all the pieces of the puzzle back together.

Start by re-installing the trigger group. Lay the weapon on its left side. Insert the group back into the receiver, aligning the pin holes. Use the pins to secure the trigger group in place. Pins must go in from the right side of the gun to the left. Insert the forward pin first.

You may need your golf tee and a good tap to get them securely in place.

Carefully set the bolt carrier into the notches on the forend rails.

Place the bolt on top of the bolt carrier with the bolt face facing forward.

Slide the forend assembly over the magazine tube and into the receiver.

You may need to press the metal strips you used to release the bolt carrier and the forend during disassembly.

Rack the pump to the rear and then forward, but only about halfway.

The barrel should slide easily into place. Be sure to give it one last visual inspection before reassembly. You can never be too safe.

Tighten the magazine cap to secure the tube in place.

Rack the action of your M870 a few times to make sure everything is working as it should.

Give the exterior a good wipe down to clean away any excess lube or solvents.

Go ahead and throw it to your shoulder and make a few practice swings… just to say you’re sorry and let your M870 know you still love it. Now you’re ready to hit the range or the field together. Hopefully you’re ready and feeling a little more confident with your shotgun now that you know how to clean a Remington 870!