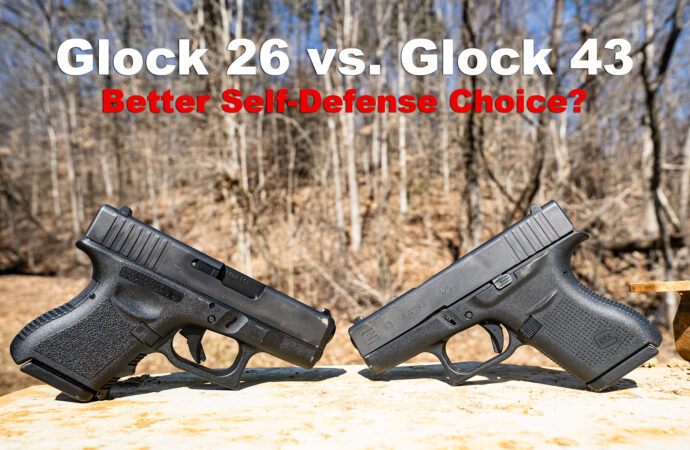 A side by side look at two popular Glock options for concealed carry - the G26 and the G43.

If you’ve decided to get a Baby Glock, you aren’t alone. The company’s subcompact models are insanely popular among concealed carriers. However, the persistent raging debate is between the Glock 26 vs. Glock 43. Both models have plenty to offer, especially in the concealment and reliability departments.

But which one is better?

While we probably won’t be able to settle this argument here, we’re going to dive into the specs so you can make an informed decision about which petite polymer 9mm pistol will work best for you.

We promised the specs, and here they are. 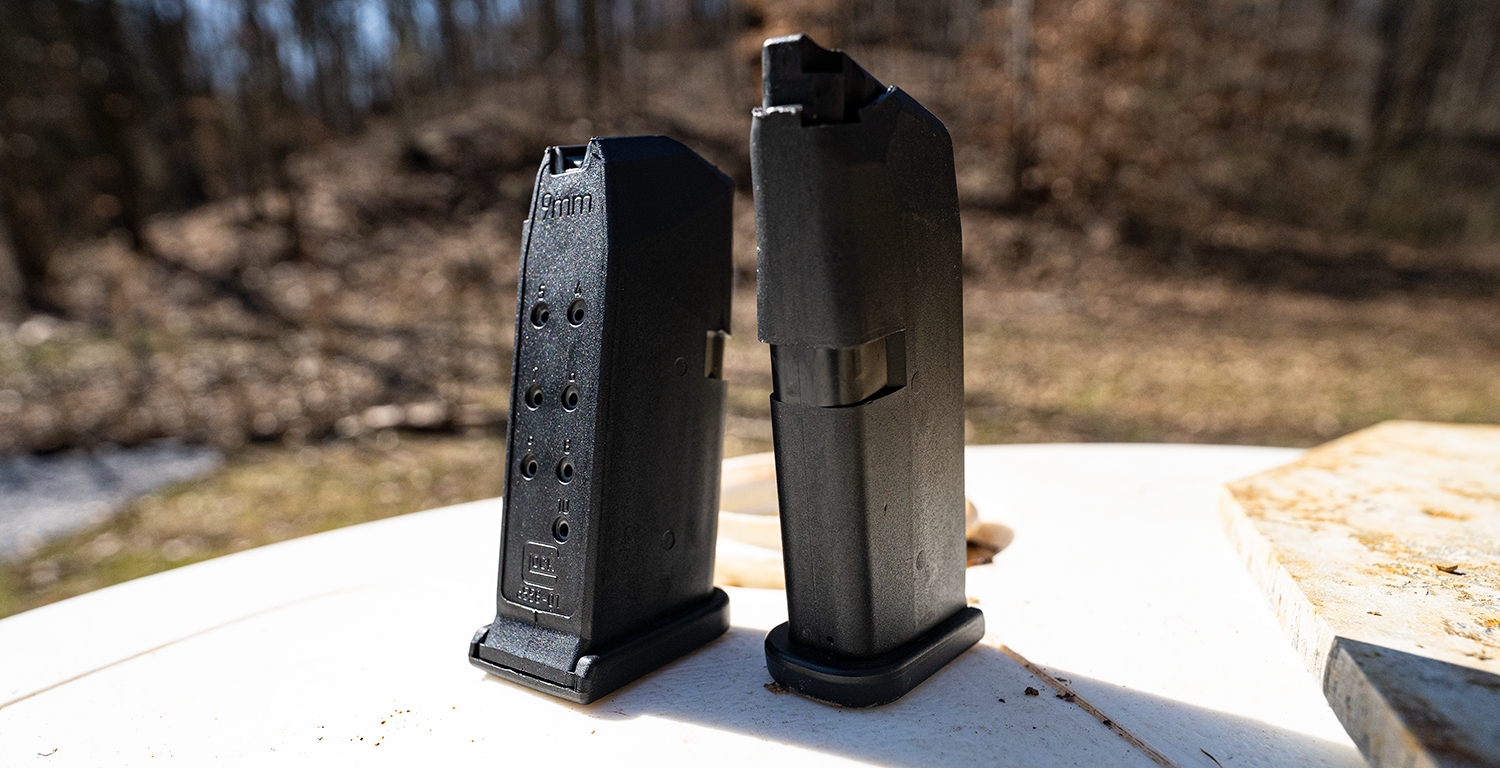 Even on paper, the differences between these two subcompact handguns are minimal. The biggest difference is the way cartridges are stacked in their magazines.

The G43 has a single-stack magazine. Single stack magazines have their rounds arranged in a single, vertical column.

The G26 has a double-stack magazine. Double stack magazines hold their rounds in a sort of back-and-forth, zigzag pattern. The cartridges are arranged in two columns. The top cartridge of each column is fed alternately into the firearm’s chamber. The design makes the magazine (and the pistol that holds it) wider than a single stack. However, the double stack configuration holds more rounds in a shorter area, accommodating about 1 ½ times more cartridges in the same vertical space.

The G26’s double-stack configuration is what allows it to hold four more rounds than the G43.

This may go without saying but both pistols are chambered to fire 9mm Luger ammo.

The length and height of the G26 and G43 are pretty similar. The G26 is slightly longer, wider, and heavier, but not substantially. The most notable difference in dimensions is the width. While a quarter of an inch may not seem like much, it can make a world of difference in effective concealment. A thinner profile allows the G43 to easily disappear under almost anything in your wardrobe, especially in a good IWB holster.

While both pistols are fairly easy to conceal, the slimmer dimensions of the G43 make it particularly well-suited for pocket carry. However, because of Glock’s light trigger pull and lack of external safety, slipping it inside your pocket without a proper holster is just plain foolish. 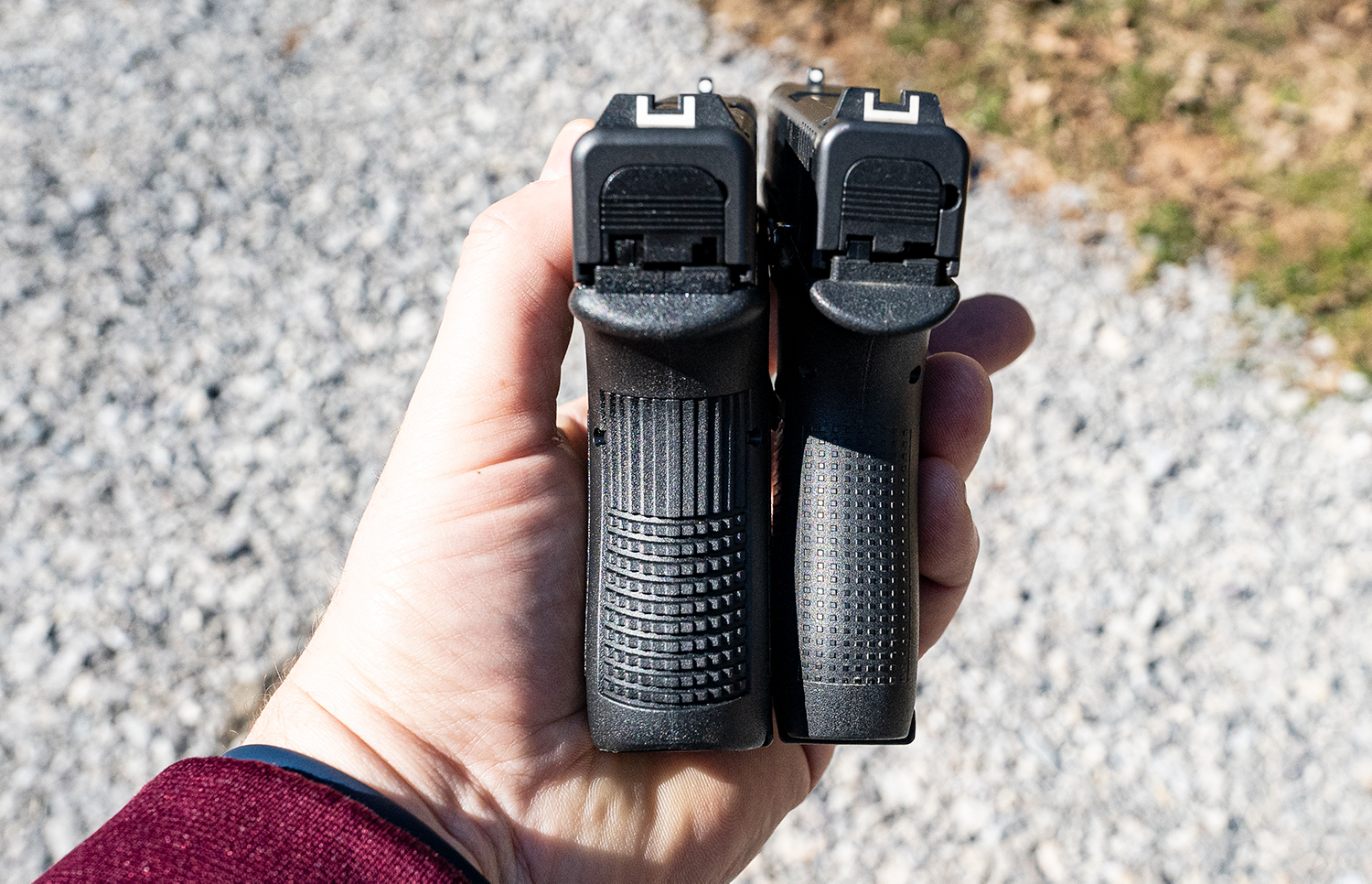 The grip dimensions of these two petite pistols aren’t all that different either.

The G43’s grip is narrower by .24 inches. However, it provides slightly more real estate to grasp thanks to its extra .08 inches in length. If that doesn’t seem like much, you’re right.

Considering the average human pinky is about .3 inches wide, that extra .08 inches of grip height is still going to leave most people’s pinkies slipping off the bottom of the grip. Thankfully, there are pinky-extension magazines available for both models, but every extra inch you add to these firearms detracts from their concealability, which is really their best feature.

Which grip is better? That’s mostly a matter of opinion. There are plenty of articles floating around the internet claiming the narrow frame of a single-stack makes it easier for smaller hands to control. Most of those articles are written by dudes with big paws. The truth is that shooters with petite hands benefit from having something substantial to hold onto. Neither the G43 nor the G26 has a grip too massive for someone with small hands to control. In fact, the thinner dimensions of the G43 can make it difficult for some shooters (no matter their hand size) to maintain a firm, confident grip. Single-stacks have a tendency to slip around in some shooter’s hands during shooting, especially when those hands are sweaty.

But here’s the deal: Every shooter is different. The best way to figure out if the grip will work for you is to give it a thorough test drive. Perform that test drive on the range, not on the showroom floor. Just because a firearm “feels fine in your hands” in the store doesn’t mean you’ll be able to maintain a proper grip through multiple shots. Recoil can be a major grip game-changer.

One advantage of the G26 is that it accepts Glock 19 and Glock 17 magazines. This can be a handy advantage at the range. It also means you can carry a G26 as a backup. If your primary sidearm is a G17 or G19, you can share spare mags with your backup pistol. 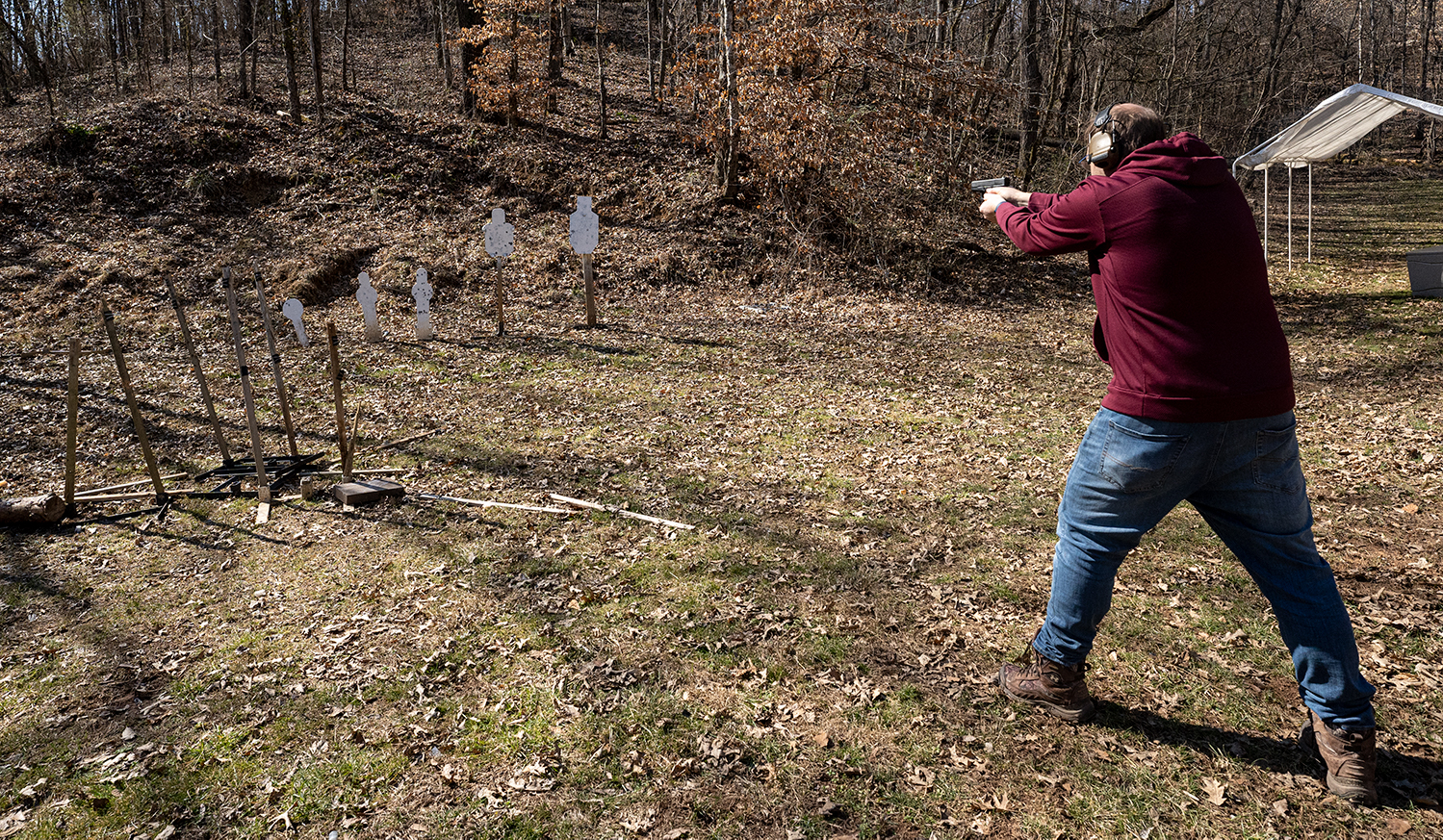 Because the G26 holds four more rounds than the G43, it also is slightly heavier. Those four rounds make the G26  tip the scales at just over 26 ounces. That’s still only 6 ounces more than a fully loaded G43.

However, an extra six ounces can help absorb some of the snappy recoil micro pistols are famous for. Due to their shorter barrel lengths, subcompact handguns can require more effort to maintain control, especially for inexperienced shooters. And although both Glocks are relatively easy to handle, the extra weight (and the extra grip width) gives the G26 a slight advantage in recoil control.

Both the G26 and G43 are solid choices. They are Glocks, after all.

Both are easy for average shooters to conceal, although if you’re looking for a deep-concealment backup pistol, the G43’s thinner profile gives it a slight advantage.

However, it’s tough to argue with the G26’s larger magazine capacity. 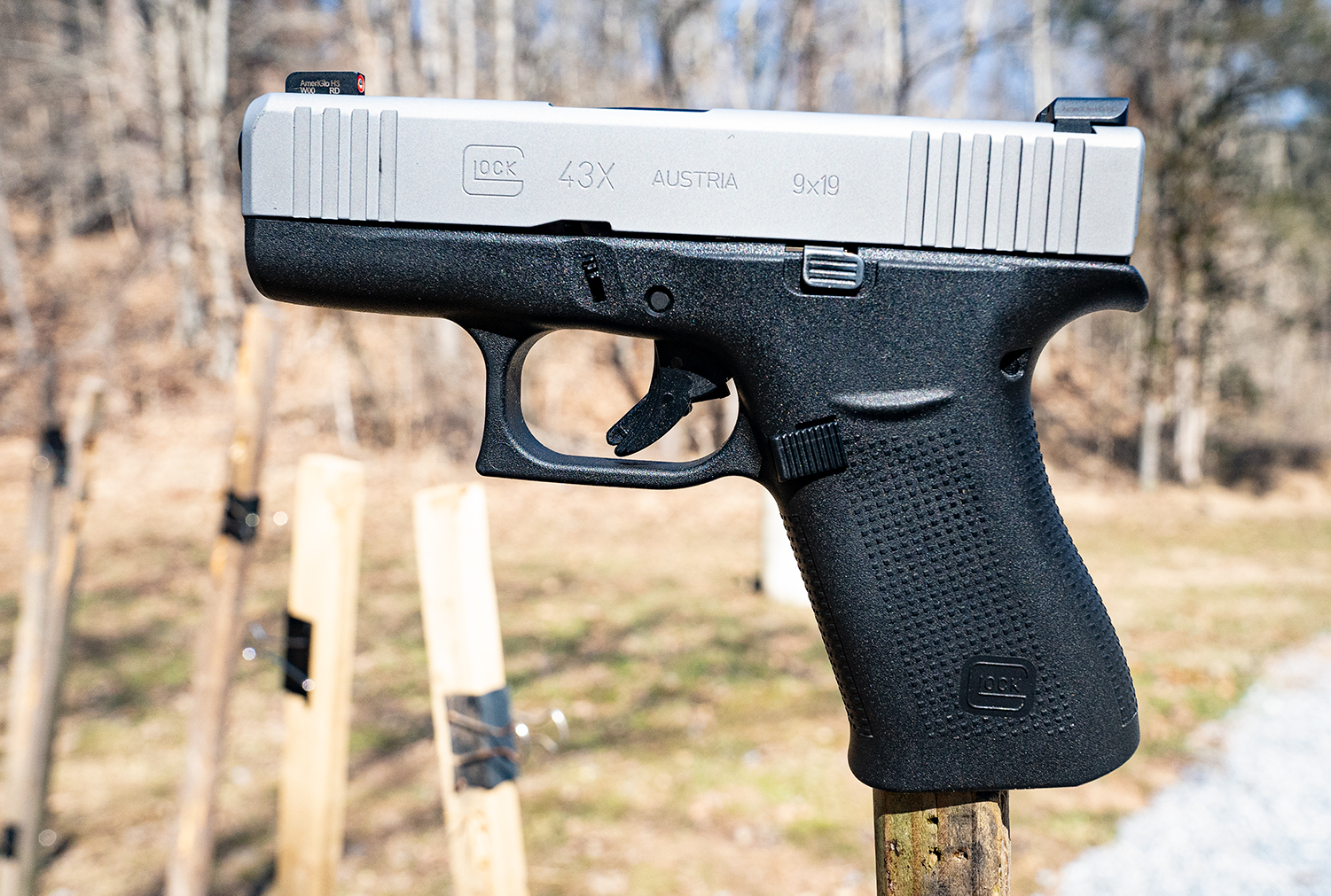 Glock is always settling debates about which of their models is best by offering a new model. This debate is no different, and Glock’s attempt to settle it is the G43X.

Here are the specs:

Essentially a Glock 43 with the capacity of the Glock 26, the G43X has a slightly wider frame (1.2 inches) and a smidgen more real estate on the grip, making it similar to the Glock 19 in length, but with a thinner, single-stack configuration. This provides a thinner profile than the G26 with the same magazine capacity (10 plus 1).

That means it is just as concealable as the G43 but offers a few extra rounds, which could literally save your life in a dangerous situation.

The “best” firearm is the one you can shoot best. However, balancing concealment and shootability is quite the tightrope walk. Ultimately, you’ll need to decide for yourself which handgun will best suit your needs, and the absolute best way to do that is to shoot them.

It’s also important that smaller shooters not fall into the trap of choosing a tiny handgun simply because they are petite. Although Baby Glocks are definitely cute, they aren’t as easy to shoot as their big brothers, the Glock 19 and Glock 17. And although a micro pistol is super easy for just about anyone to conceal, you still need a weapon that allows you to get shots on target quickly and effectively when you need to. A larger handgun will help you do that better than a tiny one in almost any situation.

How to Store A Gun For Home Defense