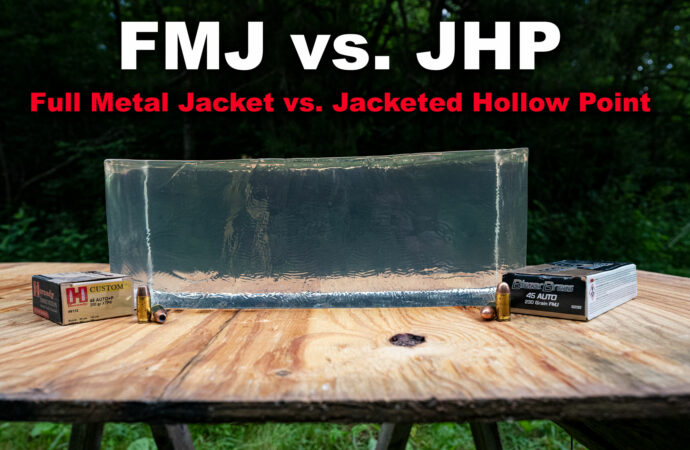 They are two of the most popular bullet types you'll find in commercial ammunition. But which is what you need? Let's dig into the differences in FMJ vs. JHP ammo.

You’re brand new to guns and ammunition. You wish all the terminology and lingo weren’t so confusing. The two hardest things to wrap your head around at first are the names of the cartridges, and the names of their bullets. Fortunately, starting out you only need to know the cartridge your firearm is chambered for. All that leaves is what bullets you want in your ammo. As a new handgun owner, the bullets you’ll be eyeballing to shoot are likely FMJ and JHP.

The short answer is that FMJ ammo is not designed to expand when it hits a target. FMJ is ideal for range training. JHP or jacketed hollow point ammo is engineered to expand upon contact with a target. It’s likely what you want to use for self-defense or hunting as it is optimized to neutralize a threat or take down game.

Read on and we’ll show you the differences in ballistic gel and get into more details. 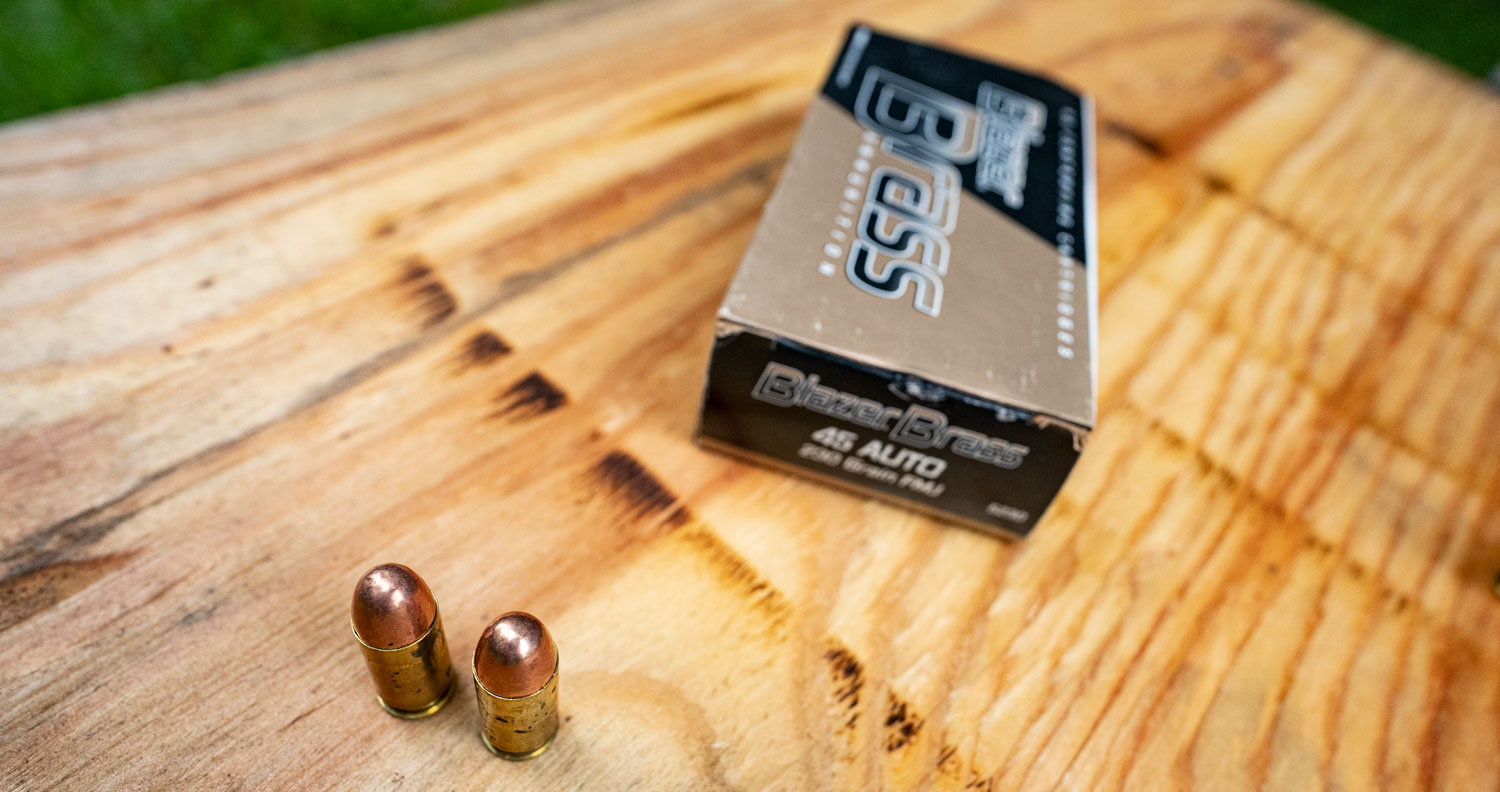 There are only two parts to the FMJ. On the outside is the metal jacket itself, which is usually made of copper or copper alloy. On the inside is the core, nearly always made of lead. The FMJ is the second simplest type of bullet available today. Without its jacket it becomes an old-fashioned lead bullet like you would see in cowboy movies.

Engineers invented the FMJ bullet in part to create ammo that is easier for a firearm’s loading mechanism to feed. The FMJ also benefits performance by causing significantly less fouling inside a barrel than an all-lead bullet.

The FMJ is not designed to expand inside of a living target, making it less effective for self-defense. But it is also more economical than an expanding bullet, so it is commonly used by civilians and law enforcement professionals for target practice and training. You should generally use FMJ ammunition when you are shooting inanimate objects. It’s going to hit the target, pass through it or stick inside it, and that’s all. You don’t need costlier self-defense ammunition to practice your aim or otherwise enjoy your weapon’s performance. (Many shooters believe it is worthwhile to train with the same ammunition you would use for self-defense, arguing it is important to become familiar with its performance. They are not necessarily wrong, but if their method is effective it is also more expensive.) 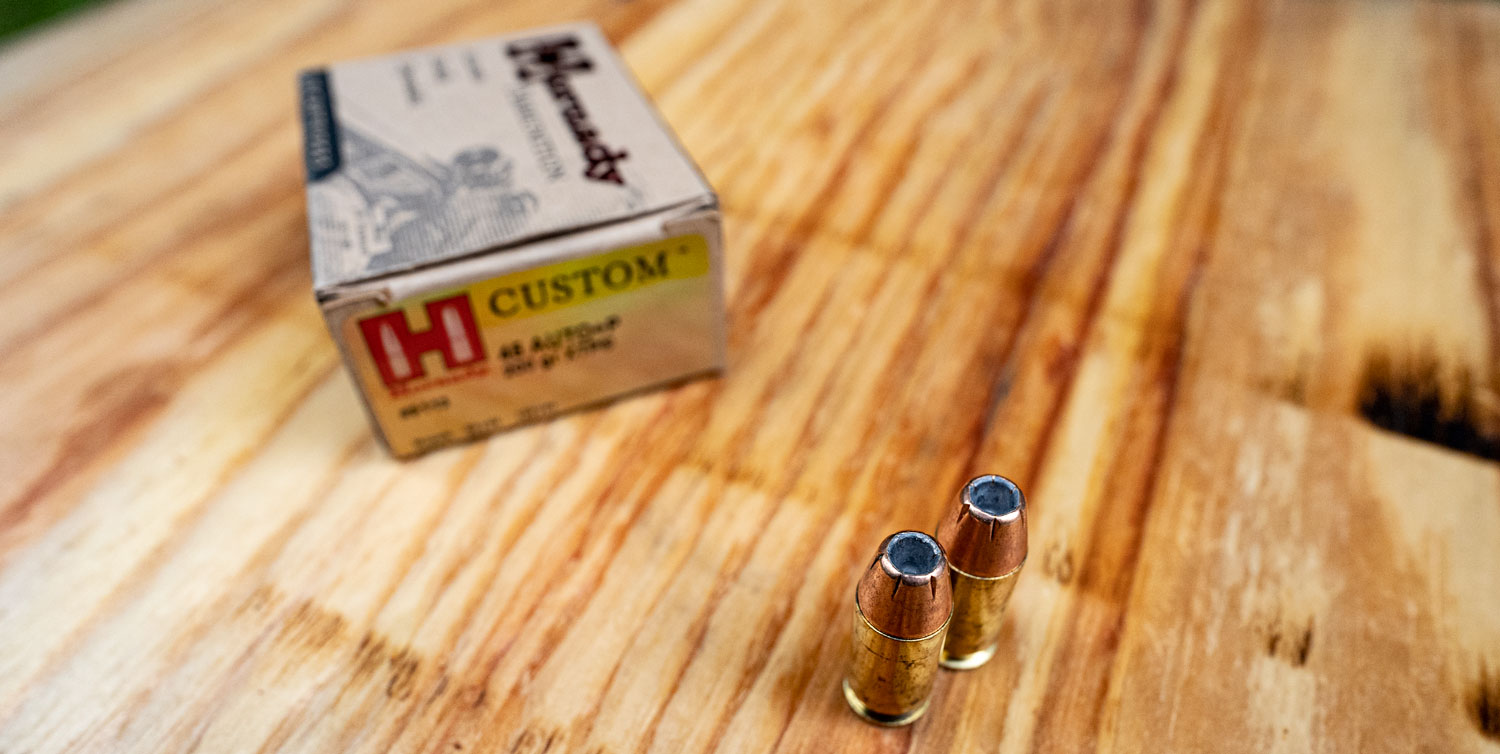 The “J” in JHP stands for the same thing as it does in FMJ. The “HP” stands for hollow point. Like the FMJ, the JHP’s jacket helps a firearm function correctly. It is different because it has a nose cavity instead of a flat, round, or pointed tip.

To imagine the difference between the FMJ and the JHP, picture yourself standing next to a swimming pool with two folded umbrellas. You drop one into the water handle first, and it sinks straight to the bottom. You do the same with the second, but it begins to open up as soon as it hits the water. The second umbrella sinks more slowly, because it meets greater resistance from the water.

Likewise, when the FMJ encounters a living, water-based body, it can pass right through it. But when the JHP bullet meets such resistance, its nose cavity begins spreading apart to significantly increase the bullet’s diameter. Let’s take a look at this in action.

FMJ and JHP In Ballistic Gel

We fired several rounds at the shooting range into a block of Clear Ballistics synthetic ballistic gelatin. This gelatin is designed to mimic the way a human body would respond if you shot it with a bullet.

We first fire Blazer Brass 45 ACP FMJ bullet ammunition. The bullet entered the gelatin on the right hand side of the image above and traveled 16-inches through the entire block of gel. From there, it exited the block and kept traveling down range. (We were unable to recover the bullet.) We highlighted this bullet’s travel with a red box in the photo above. You can see it was pretty much a straight line through the target. There’s no real expansion that occurred.

Next, we fired Hornady 45 ACP JHP ammunition into the same block of gel. You can see that round’s track through the gel block highlighted in red. Notice how this round not only stopped inside the gel block but how the track is also much uglier. It’s wider because this round opened up, hoping to make as big a hole in its target as it possibly could. This wider wound channel helps contribute to blood loss, a huge factor in neutralizing a threat or brining down game.

The JHP does three important things as it expands within a target:

A JHP’s impact energy is usually more jarring than an FMJ’s, and the injury it inflicts has a greater chance of overlapping with a vital organ. This is why you load JHP ammunition in your handgun when you want to optimize its performance for self-defense. The JHP simply does far greater damage when it hits.

Now that you understand the basic differences between the two bullets, you can easily learn their variations.

It is not uncommon for ammo manufacturers to give a brand name to a JHP of their own design. These include:

The FMJ is less expensive than the JHP. Use FMJ ammo for recreational shooting, training, and other situations where you are not concerned with how much damage you can inflict. If your’e serious about shooting, these are rounds you’ll buy in bulk. The JHP does more damage to a living target than the FMJ. Use JHP ammo for when you wish to turn your firearm into a weapon for self-defense.