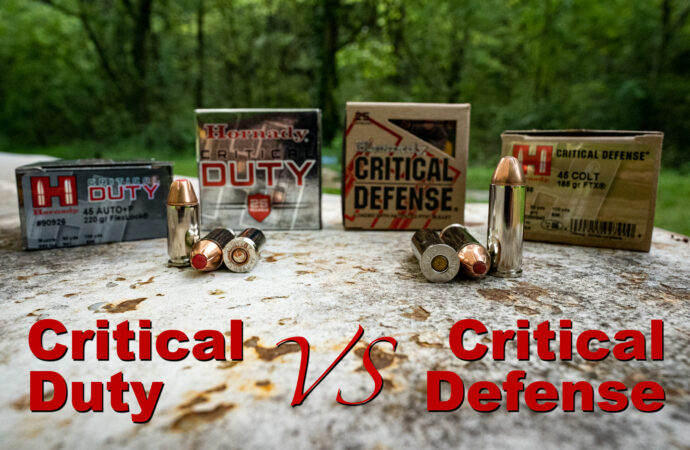 Few ammunition manufacturers are as innovative and creative as Hornady. Rooted in long range hunting bullets, this company has become one of the leaders in thoughtful bullet and ammo design, creating real solutions to issues that have bothered shooters for decades.

While began in hunting ammunition design, Hornady applied their high level of creative innovation to handgun rounds, including a pair of sister product lines: Critical Defense and Critical Duty. These loads have some similarities but also some important differences. Both rounds set a high standard for both personal use and law enforcement performance.

Getting to Know Critical Defense 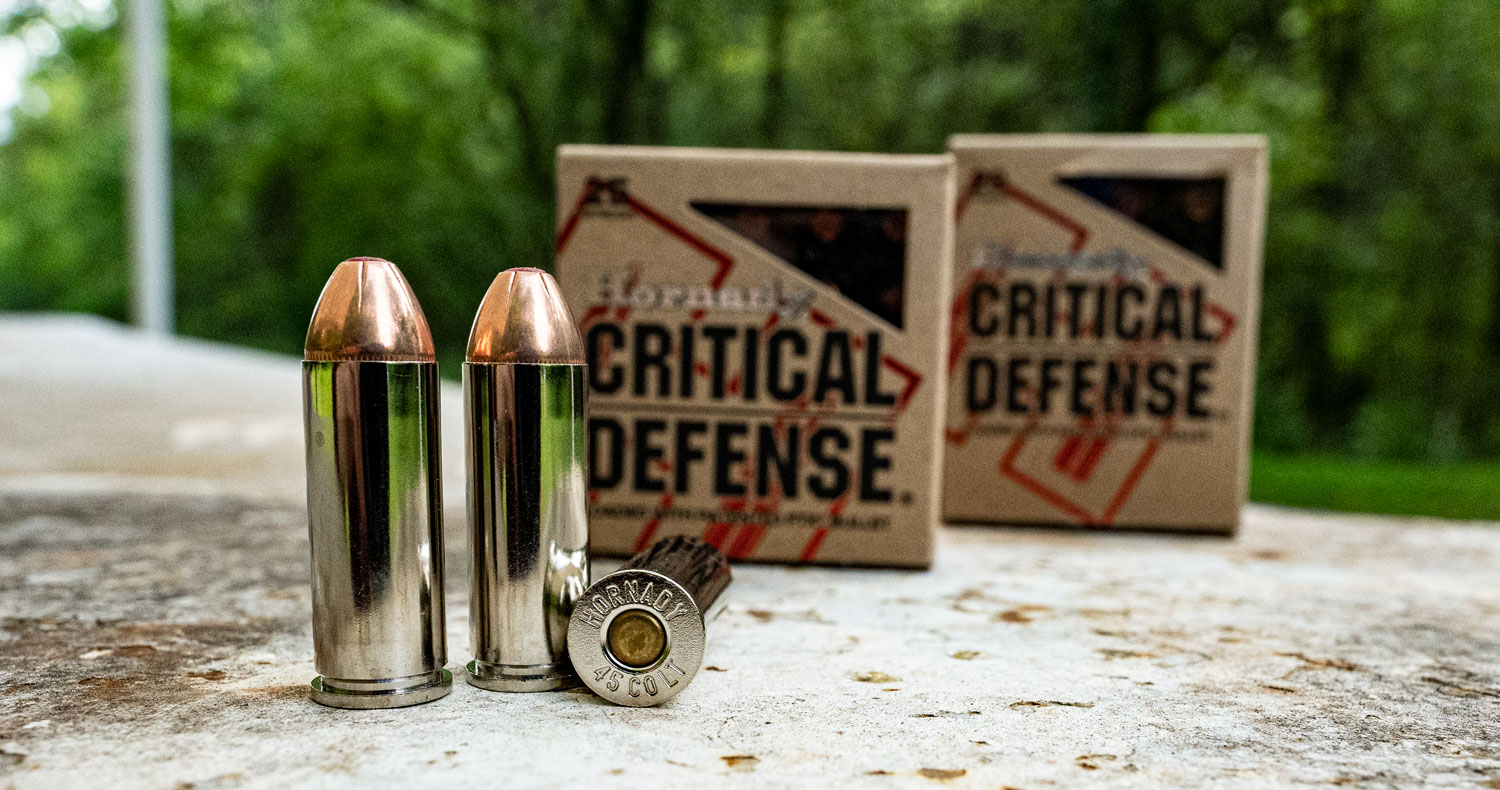 Critical Defense is a line of ammunition made specifically for self-defense and home protection. Hornady makes it for compact pistol shooters, especially firearms intended for conceal carry purposes. They engineer these cartridges specifically for personal protection. They possess features like Hornady’s Flex Tip bullet and optimized propellants.

Getting to Know Critical Duty 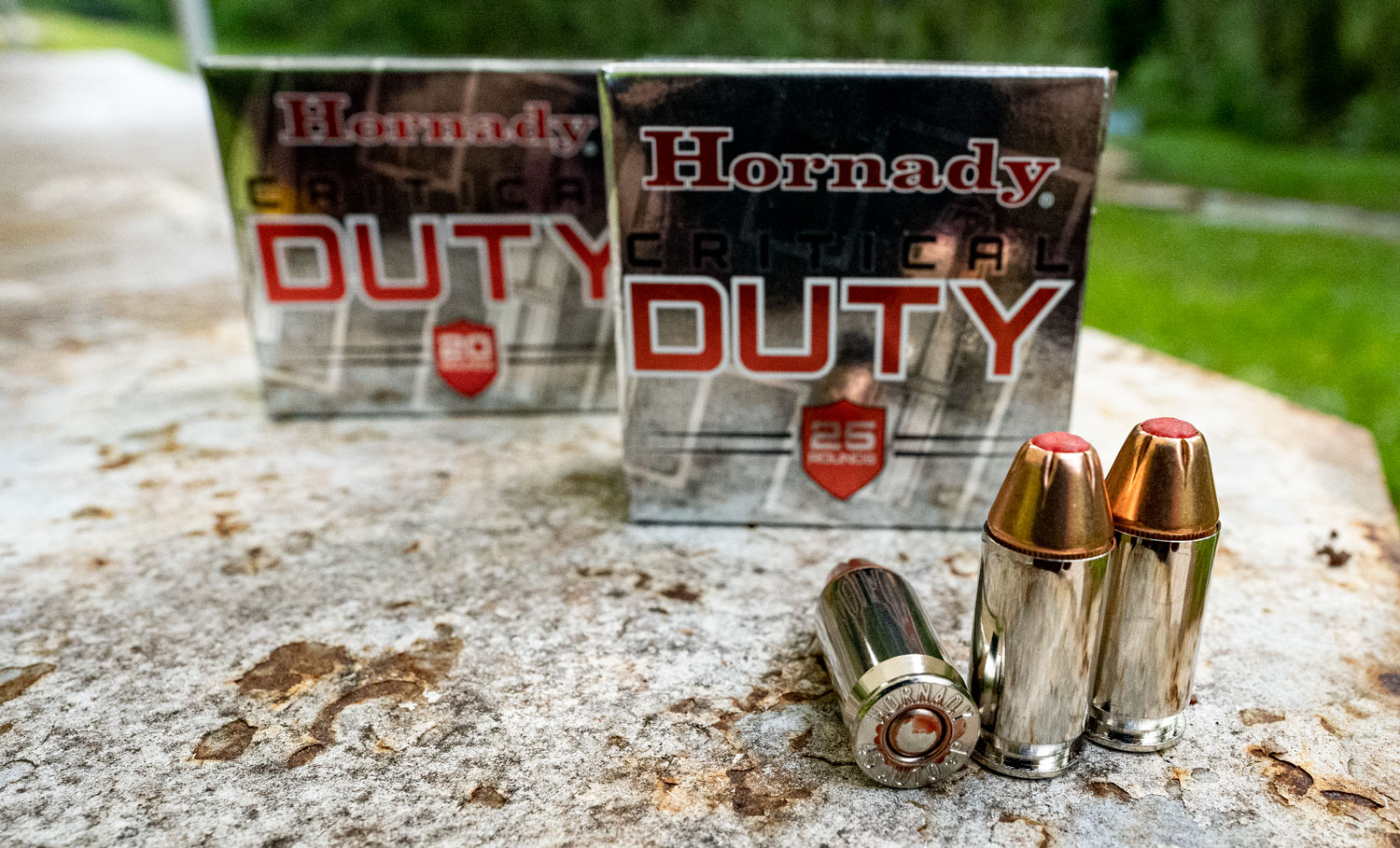 While Hornady manufactures Critical Defense for private citizens, they make Critical Duty to meet the standards of law enforcement personnel. It is designed to penetrate barriers while still deliver-ing high ballistic performance to the target. With a special jacketed hollow point and engineering features that enhance mushrooming, they make Critical Duty with enough power to fully activate the slide of a full-sized handgun, such as a 1911-style pistol.

These two lines are very similar in design and features, and thanks to similar names, they are easy to confuse. Just remember that Critical Duty is for “on duty” police officers, while Critical Defense is for people who want to “defend” themselves and their homes.

How are They Similar? 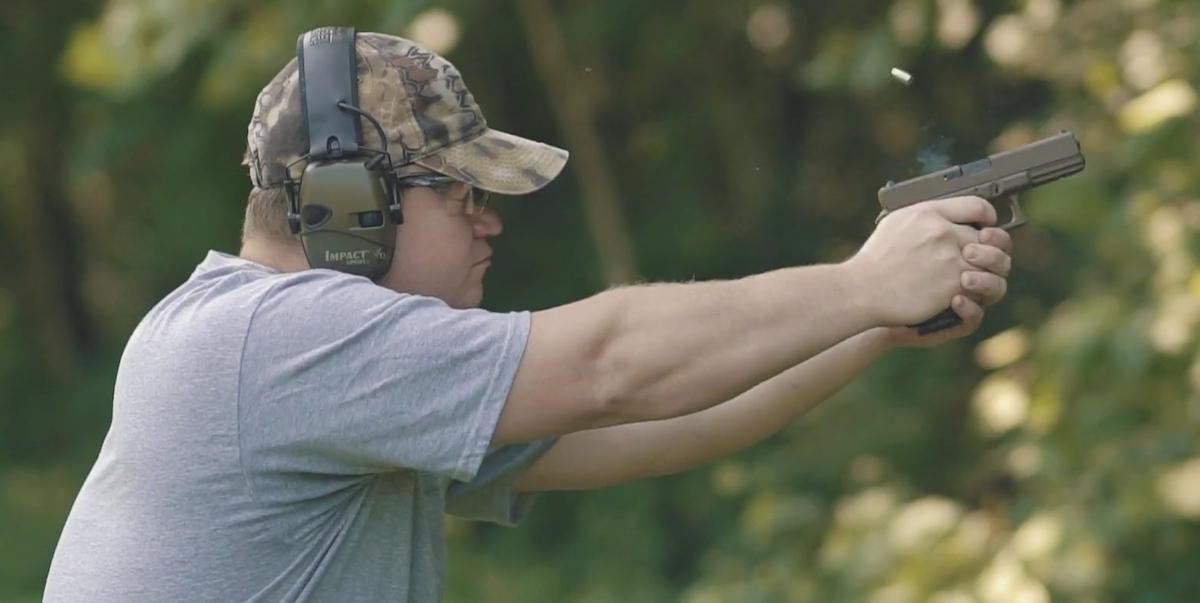 While different, these Hornady ammunition options have many similarities. Probably most important, both carry Hornady’s FTX bullets with Flex Tip technology, a design that has proven to deliver outstanding performance at the target. The bullet is a hollow point projectile Hornady fills with a flexible material that resists “clogging.” This can reduce terminal performance if left unchecked. The FTX bullet is equipped with an InterLock ring. This ring controls expansion and ensures better terminal performance once the bullet strikes the target.

The both also use a nickel-plated case, which resists corrosion, enhances cartridge cycling, and benefits chamber checks. Against the dark material of a handgun, such as a Glock product, having the ability to clearly see the cartridge in the chamber can be important, especially in low-light situations.

While they use different propellants, both loads have a low flash. This reduces the chances you’ll be blinded by muzzle flash in a critical nighttime situation.

How are They Different? 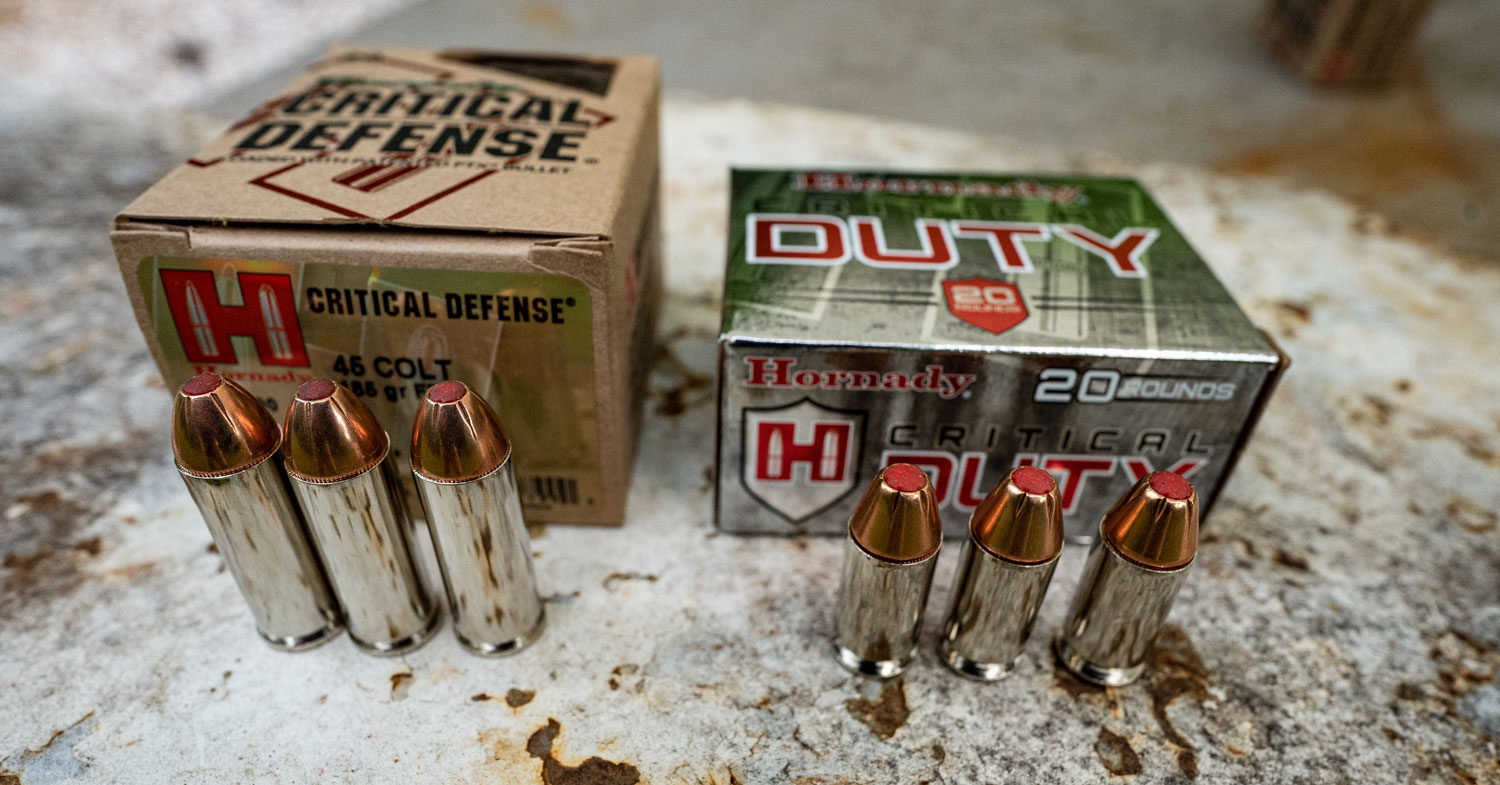 There are clear similarities, but Hornady designed these two product lines to fill very different roles. The Critical Defense line is made for short-barreled weapons. You know, the kind we usually use for concealed carry purposes. Meanwhile, Hornady makes the Critical Duty line for full-size handguns, the type police officers and tactical professionals often carry.

The bullet cores for these ammunition lines are also different. For Critical Duty, which calls for greater penetration, the core is a much harder lead. According to a video from Shooting USA, the lead in the Duty line is the same used in Hornady rifle bullets. They extrude this lead into hard wire, then join it with a heavy copper jacket. Eventually, it becomes a bullet for law enforcement professionals. 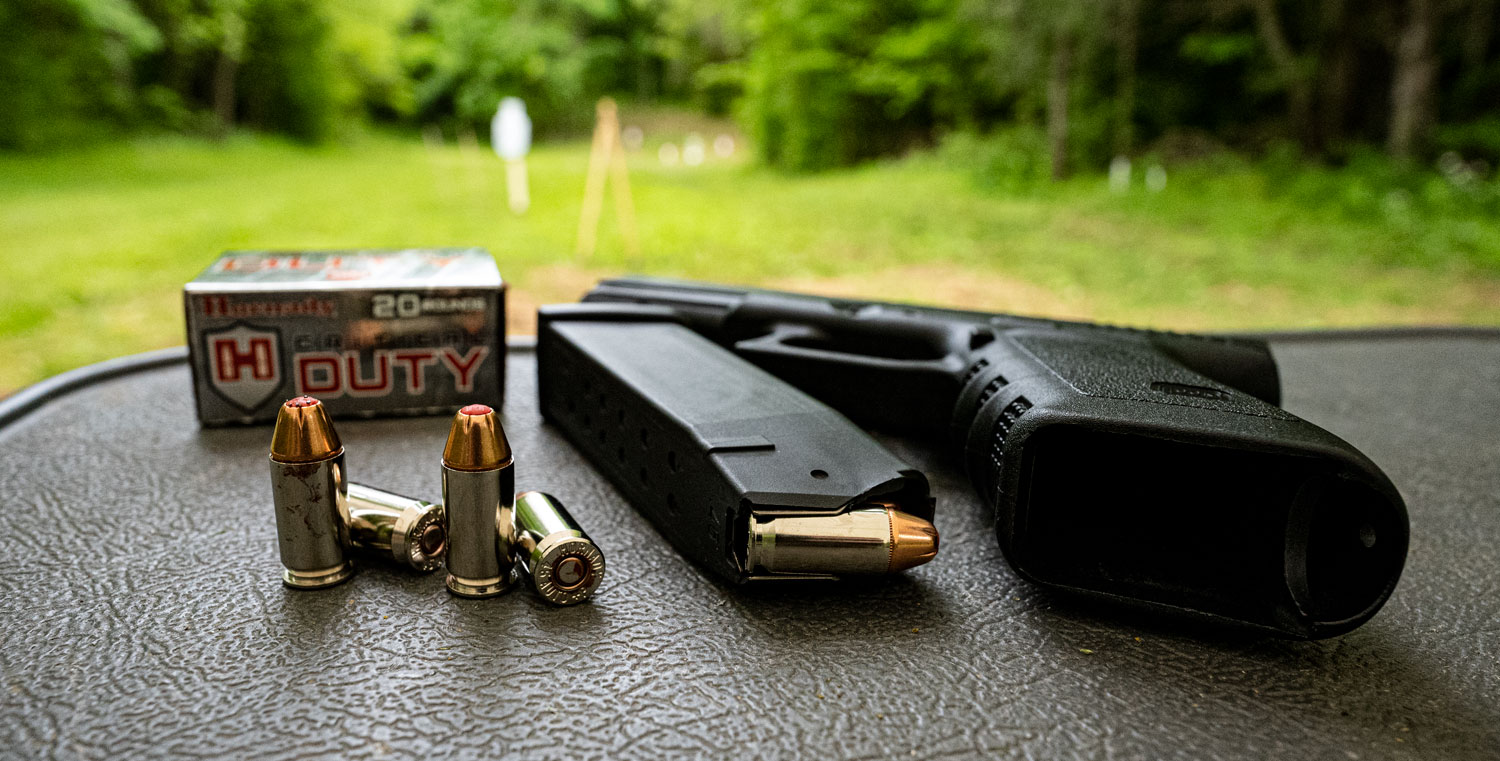 In the end, handgun type will drive your selection; if you have a specific weapon, it’s unlikely that you will interchange the two. If you carry a compact handgun, specifically one for conceal carry purposes, you will choose the Critical Defense line of ammunition. However, if you use a full-sized handgun, the Critical Duty line is the ammunition of choice. Although Hornady primarily markets Critical Duty to law enforcement personnel, it does have its uses among the general public.

Want some proof to back that up? I don’t blame you.

We tested both loads as part of our best 9mm ammo for self-defense tests. We fired both Critical Duty and Critical Defense 9mm loads into ballistic gelatin using a short-barreled Smith & Wesson Shield pistol.

The Critical Duty penetrated and expanded nearly 22″ and expanded .42″ in our 5-shot grouping done as part of the tests.

The Critical Defense Lite penetrated 13.7″ and expanded .52″ in our testing.

Fired through a 4-layer cloth barrier into ballistic gel with a Smith & Wesson Shield pistol. 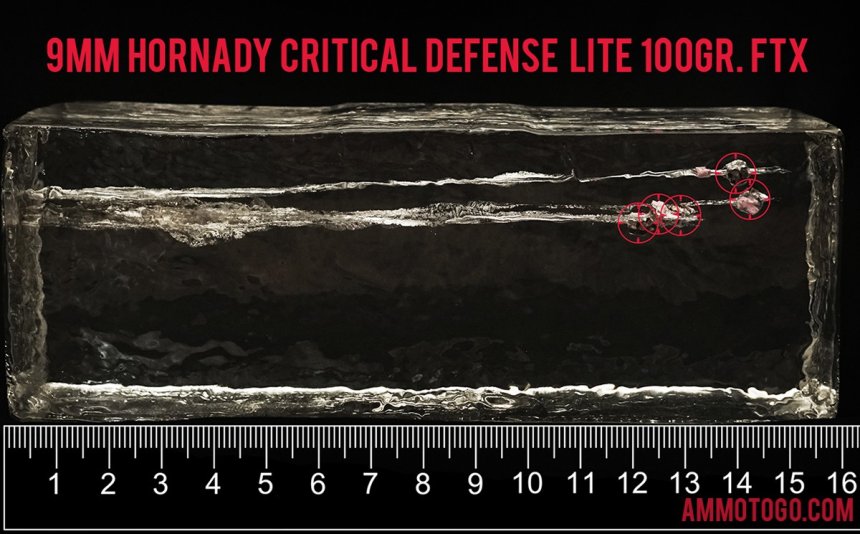 So, if you trust the Federal Bureau of Investigation’s standard for these types of tests, the Critical Duty over-penetrated while the Critical Defense Lite performed about it line with what the FBI looks for.

Find Critical Duty and Defense at Ammo to Go!

Need high-quality ammunition for your home defense or conceal carry weapon? Visit ammotogo.com and you’ll find top-quality rounds that give the performance and ballistics your need in a critical situation.