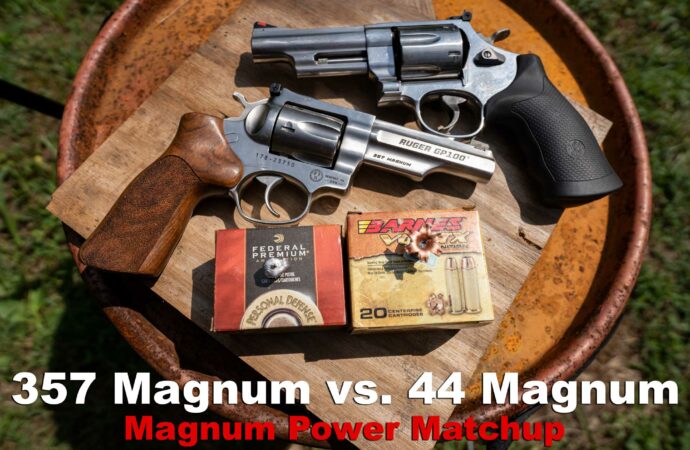 Let's take a side-by-side look at the 357 Magnum vs 44 Magnum calibers. We'll analyze history, ballistics and availability to help you determine which one of these revolver heavy hitters is best for you.

When it comes to powerful revolver cartridges, two of the most popular, effective, and well-known options are the .357 Magnum and the .44 Magnum. Both deliver decent accuracy, tremendous energy, and versatile performance.

They make a useful option at the range, on the hunt, and can even be used for personal defense.

So which is right for your needs? Let’s explore 357 Magnum vs 44 Magnum in a magnum caliber match-up to see if one would be best for your shooting.

Most shooters, on some level, are concerned with price. Although both of these handgun cartridges are not generally used in high-volume shooting, a difference of only a few dimes per shot can make a big difference over a lifetime of ownership. Although pricing will depend on where and how you buy, you’ll usually find that the .357 Magnum ammo is a more affordable round.

.44 Magnum ammo is larger, and tends to be less common than the .357 Magnum. There can certainly be overlaps in pricing, but in general the .357 Magnum is a better choice for price-sensitive gun owners. 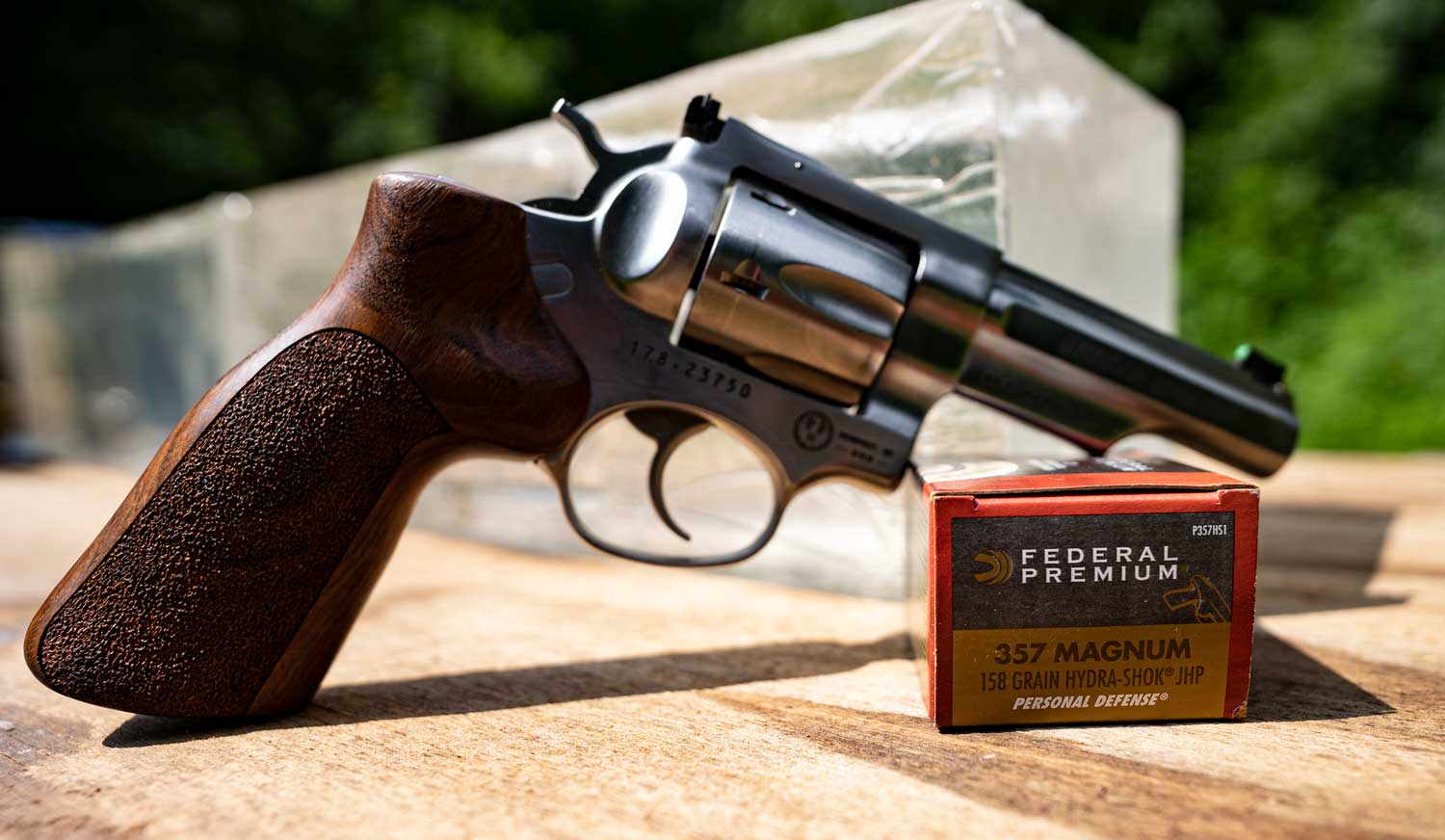 Bullet size is probably the main physical difference between these two cartridges. This is made clear in the naming of the two. (.44 is, after all, a larger number than .357, although the “.44” comes from the rim diameter, while “.357” comes from the bullet diameter.) The size difference it can also be seen in the bullet weight. The range of bullet sizes for the .357 is roughly 125 to 180 grains, while .44 Magnum ammo has bullets ranging as high as 300 ft-lbs. 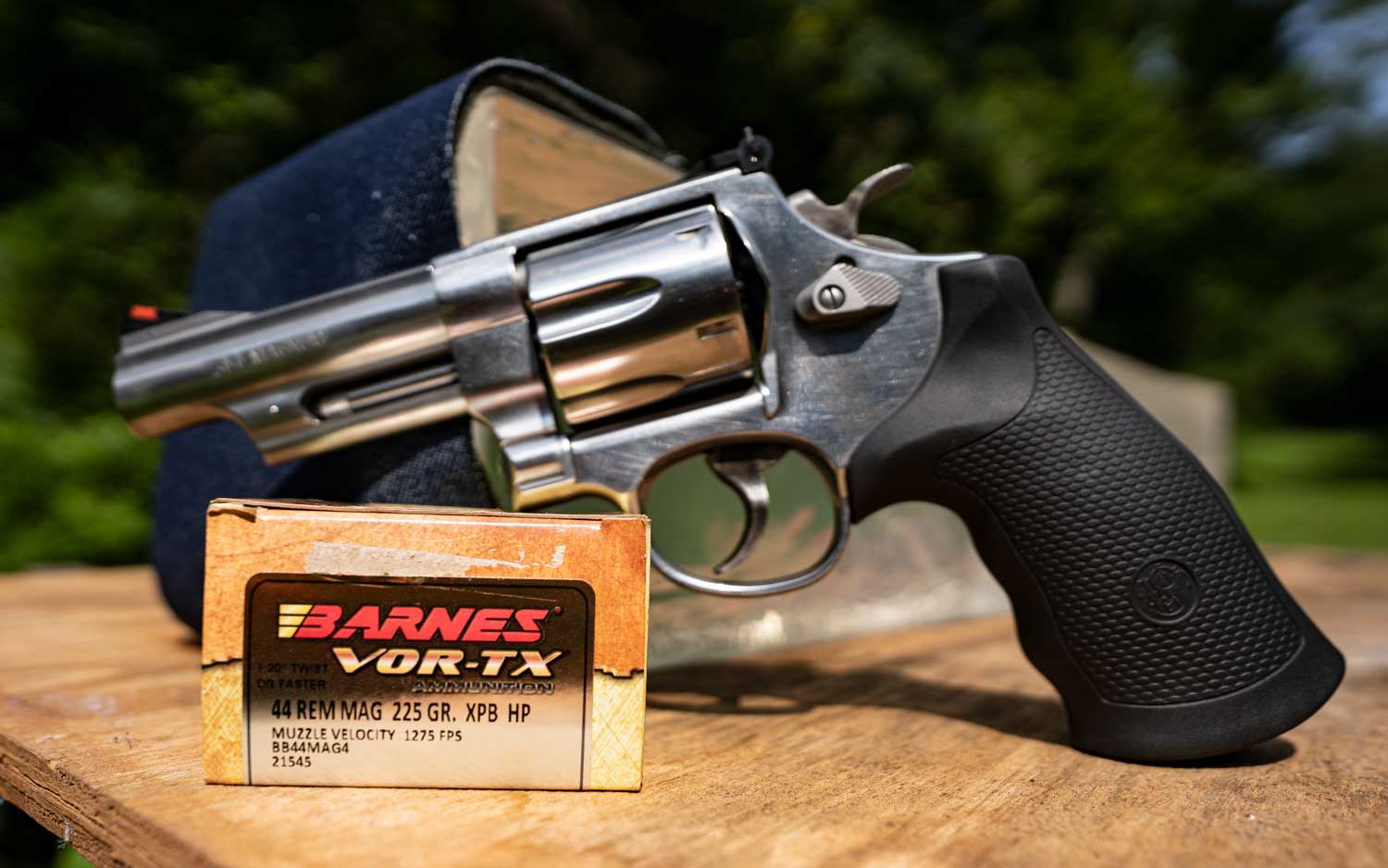 Looking at the cartridges side by side, it’s immediately clear that the .44 Magnum is the larger cartridge, especially in rim diameter. So not only does it have a heavier bullet, but it packs more propellant behind the heavier projectile. This comes into play when we start to look at the performance of these cartridges.

Which Round is Faster?

Velocity is one of the most important factors for accuracy, energy, and terminal performance. In almost all cases, the more speed you have, the better a cartridge and bullet will perform. As we see from the three comparable couples above, the .357 Magnum was faster in two of the three comparisons, and it also had the fastest overall velocity.

But the differences aren’t what most of us would consider significant. The bottom line is simple: although there are differences in speeds, gun owners really won’t select one or the other based on velocities.

For handguns, energy is an extremely important factor, especially if the cartridge is being used for hunting or personal defense. If muzzle or downrange energy is a concern, the .44 Magnum is your best choice. In all three comparisons, we see the .44 Magnum has higher muzzle energy and energy after 25 yards.

The highest muzzle and downrange energy was by the .44 Magnum, while the lowest came from the .357 Magnum. This does not make the .357 a weak cartridge by any means, it simply can’t match the extreme force of the .44 Mag. There are very few situations where the .357 Magnum is the weaker cartridge; this happens to be one of them.

To get an idea of what each cartridge is capable of for self-defense, we set-up a small test using synthetic ballistic gelatin. We picked a common self-defense load for each caliber. For 357 Magnum, that was Federal’s 158 Grain Hydra-Shok round. For 44 Magnum, we went with the 225 grain Barnes hollow point ammo.

From 10 yards out, we fired each of the cartridges through a 4-layer cloth barrier into the ballistic gelatin. This follows similar protocol to how the Federal Bureau of Investigation tests ammunition.

The 357 Magnum round penetrated beyond the 16-inch gel block and into a second block. It ended up penetrating about 22 inches total. According to the FBI’s standards, that’s more penetration than is ideal. You can see the wound channel created by the 357 magnum round inside the blue box in the photo above.

The 44 Magnum round got to the end of the first gel block and then almost stopped. It just barely penetrated into Block #2. So, just about 16″ of penetration for it, which falls into the FBI’s desired range of 12-18 inches. The photo above shows the 44 Magnum’s wound channel with a red box around it.

As far as expansion goes, the 357 Magnum expanded to a final diameter of about .6 inches. The 44 Magnum really mushroomed out. It came to rest with expansion of just shy of .9 inches in the gel. You can see each expanded bullet we recovered from the ballistic gelatin in the photo below. 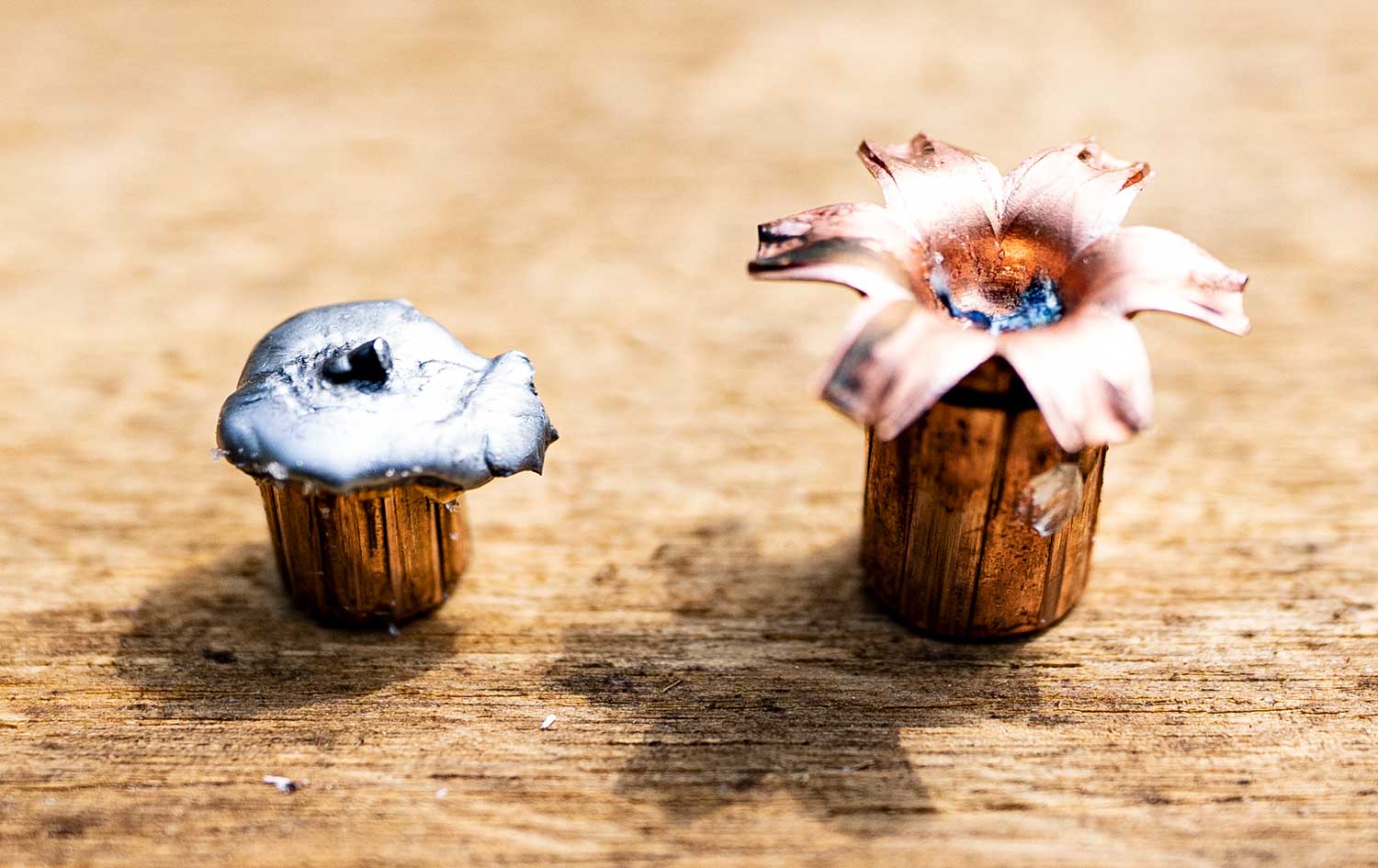 Although trajectory is more important for rifle ammunition, it still makes a difference in handguns. In this case, the .357 Magnum has slightly less drop than the .44 Magnum, which is likely due to the fact that they have similar speeds but the .357 has lighter bullets. The .357 Magnum Barnes expander with 140-grain bullets had the lowest drop; it’s probably no coincidence that it also had the lightest bullet. 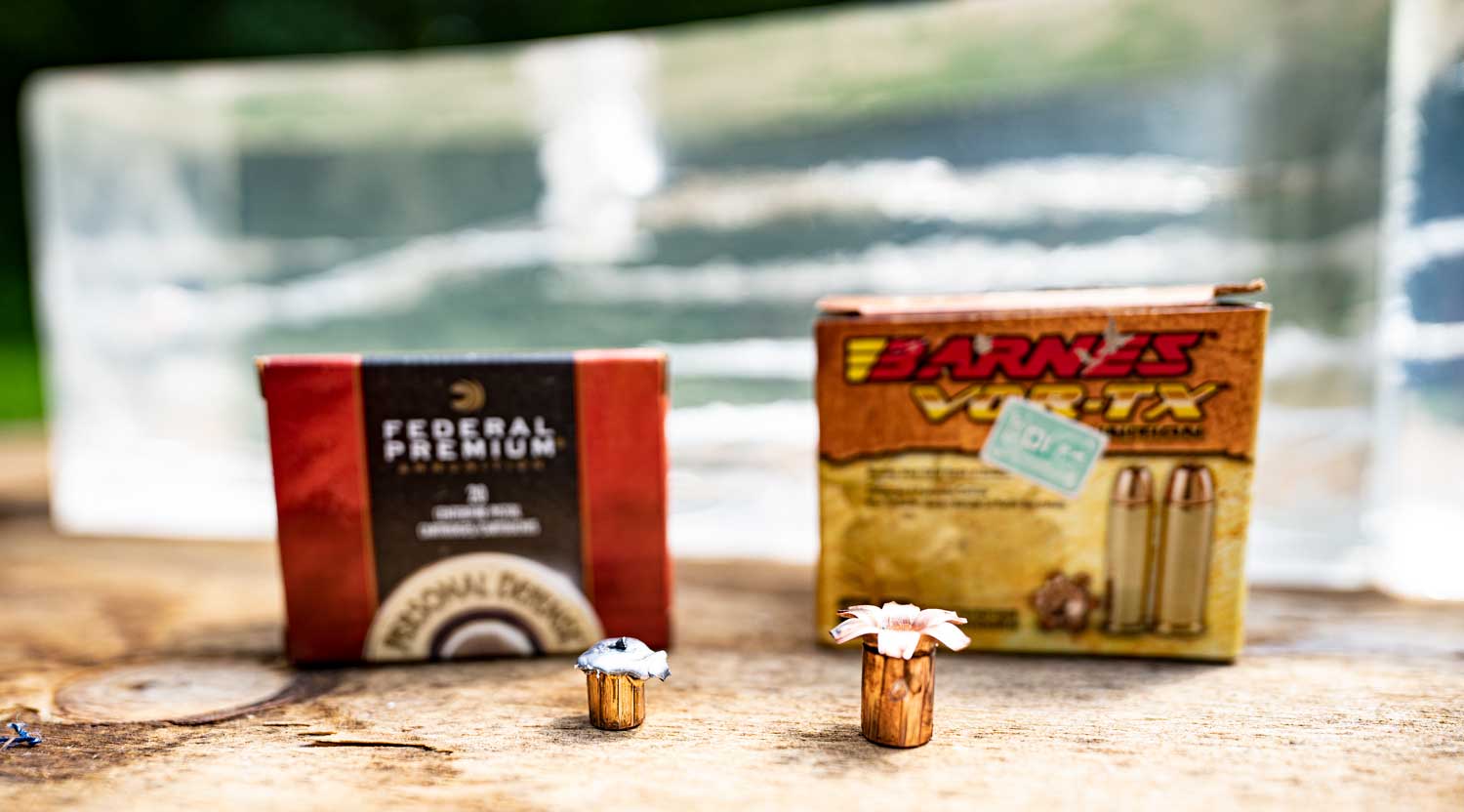 So which is the best choice for your needs? To be fair, you can use either cartridge  for hunting a wide variety of game and both deliver plenty of force for personal defense. If you want a hard-thumping round for the range, you’ll be happy with either.

But if you want to hunt larger game with a revolver, the .44 Magnum is your best choice. This round has the capability to drop large game like elk and buffalo, and can even be used to kill a polar bear.

But the .357 Magnum has one advantage: reduced recoil. While it may not be the best choice for a shooter who struggles with recoil, it certainly has a lighter thump than the powerful .44 Magnum. In the end, this could be the deciding factor in your ammunition choice.

No matter which cartridge you select in the 357 Magnum vs 44 Magnum debate, you’ll find the ammunition you need at ammotogo.com.