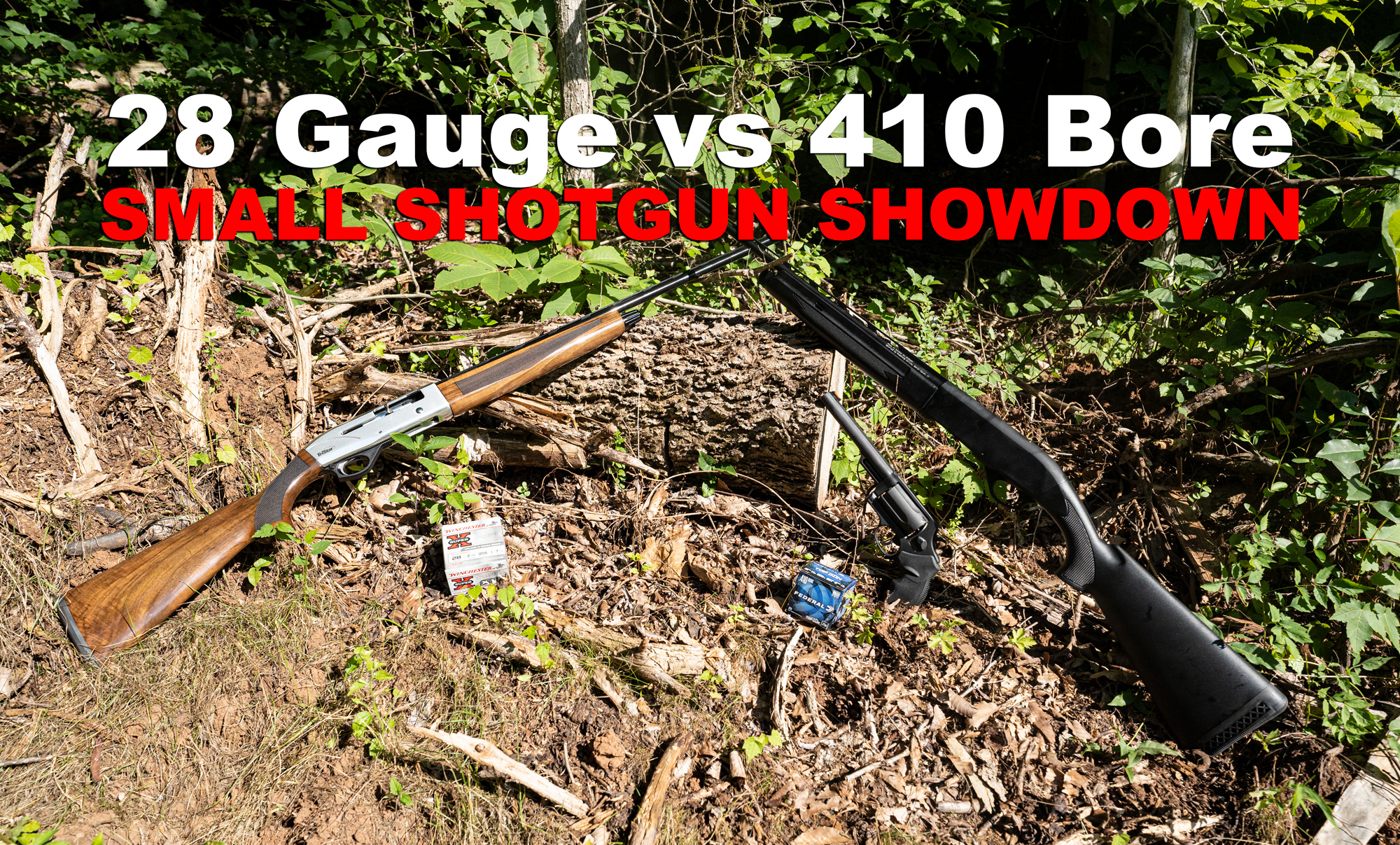 It’s a small shotgun showdown with a side-by-side comparison of the 28 Gauge versus the 410 Bore. What’s the difference ballistically between the two and what is each good for?

The 28 Gauge is a great shotshell for hunting upland game. Within 30 to 35 yards it’s capable of downing grouse, quail and dove with ease. Plus, its utility at trap ranges and sporting clays courses is indisputable.

But if you’re interested in buying a small-bore shotgun, why not go with the even smaller 410 Bore instead? Its effective range for hunting is roughly the same as that of the 28 Gauge, and you may already have noticed that 410 Bore ammo is easier to find.

If you’re caught in the crux of the 28 Gauge vs 410 Bore dilemma, never fear! Everything you need to know about the two rounds’ relative performance is about to be revealed.

What Is the Difference Between 28 Gauge and 410 Bore? 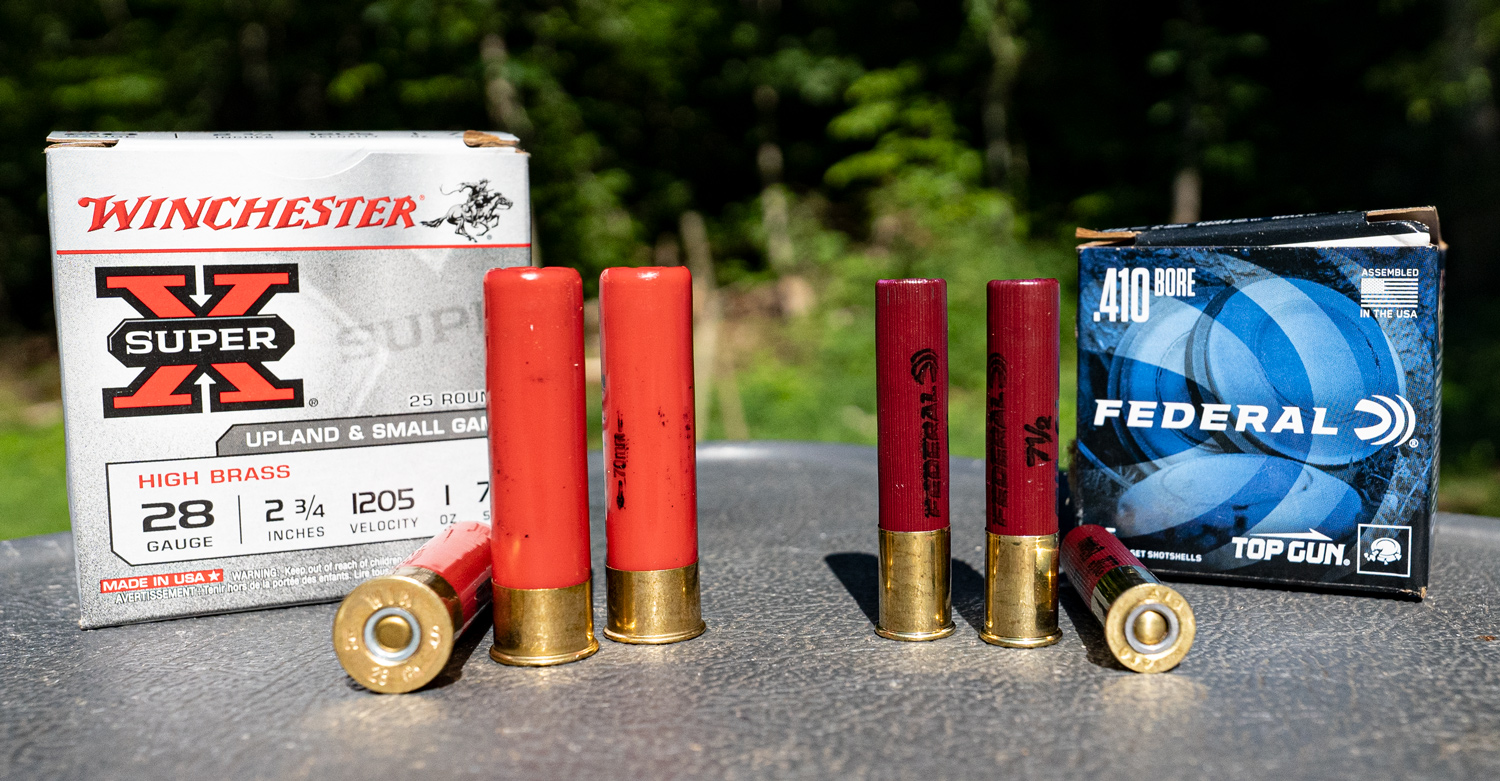 Size. The 28 Gauge is substantially larger than the 410 Bore, although the two shotshells’ different naming conventions don’t make that fact immediately clear.

The 410 Bore is often called 410 Gauge, but technically, this is not correct. It is the only centerfire shotshell which follows the naming convention typically reserved for metallic cartridges. As such, a 410 Bore shotgun literally has a 0.410” diameter bore. We could just as accurately call the 410 Bore shotgun a 67.62 Gauge!

In fewer words, a 28 Gauge shotgun’s bore is 0.140” wider in diameter. This sounds tiny, but in practice it makes the 28 Gauge far more powerful than the 410 Bore.

The 28 Gauge shell’s larger size means it is able to hold more powder (aka the stuff that goes “ker-pow”) and more shot pellets (aka the things which fly out of the barrel and ultimately damage the target) than the 410 Bore shell.

Appreciating the difference the 28 Gauge’s greater size makes is as easy as comparing several 28 Gauge and 410 Bore shotshells side by side. In our comparison table, note that 410 Bore shells range in length from 2-1/2 to 3”, whereas all 28 Gauge shells are 2-3/4” in length. Regardless, the 28 Gauge is inevitably more powerful than its narrower cousin. Also note that ammo manufacturers do not typically report a shell’s muzzle energy when said shell is loaded with shot pellets. We have calculated that data in order to show just how much more kinetic energy the 28 Gauge’s combined shot column possesses the instant it tears out of the barrel.

The 28 Gauge’s muzzle velocity is not necessarily greater than that of the 410 Bore; indeed, the shells often deliver identical muzzle velocities. But because 28 Gauge ammo is so much wider in diameter, it is able to store considerably more shot pellets – potentially twice as many, in fact!

This is why the 28 Gauge transfers more deadly energy to its target. Perhaps just as importantly, it is also why the 28 Gauge’s shot pattern is so much denser. For example, 1/2 ounces of #7.5 shot equates to 175 shot pellets – but 3/4 ounces of #7.5 shot contains approximately 263 shot pellets. The denser pattern created by more pellets makes it easier to hit a fast-moving target. That density provides a greater margin of error to compensate for any shortcomings in your aim. Simple enough!

What Advantages Does the 410 Bore Offer?

The 28 Gauge does not produce very much recoil. Indeed, its recoil energy is usually about half that of the 20 Gauge, which itself is often considered the lower-recoil alternative to the 12 Gauge.

That said, the 28 Gauge does produce nearly twice as much recoil as the diminutive 410 Bore. This makes the smaller shotshell preferable when your sole goal is to favor your shoulder as much as possible. It also makes the 410 Bore a natural choice for training very young shooters.

The 410 Bore shotshell’s recoil is so light that it lends itself to the design of revolvers. Wheel guns like the S&W Governor and the Taurus Judge are chambered for 410 Bore (and 45 Colt), and handling either is quite manageable.

The 410 Bore offers another advantage in addition to its extremely gentle recoil: ammo availability. The 28 Gauge just isn’t that popular. That’s largely because of the declining popularity of upland game hunting as a pastime. However, the 410 Bore is the third most popular shotshell after the 12 Gauge and the 20 Gauge. This is partially due to the popularity of the aforementioned revolvers chambered for 410 Bore. Those revolvers give people the option of utilizing buckshot for self-defense outside of their homes.

In short, choosing the 410 Bore over the 28 Gauge means you’ll put up with less recoil while enjoying a greater selection of ammunition. It may make hunting and target shooting a little more difficult, but if you believe it’s fun to challenge yourself then that’s hardly a shortcoming at all!