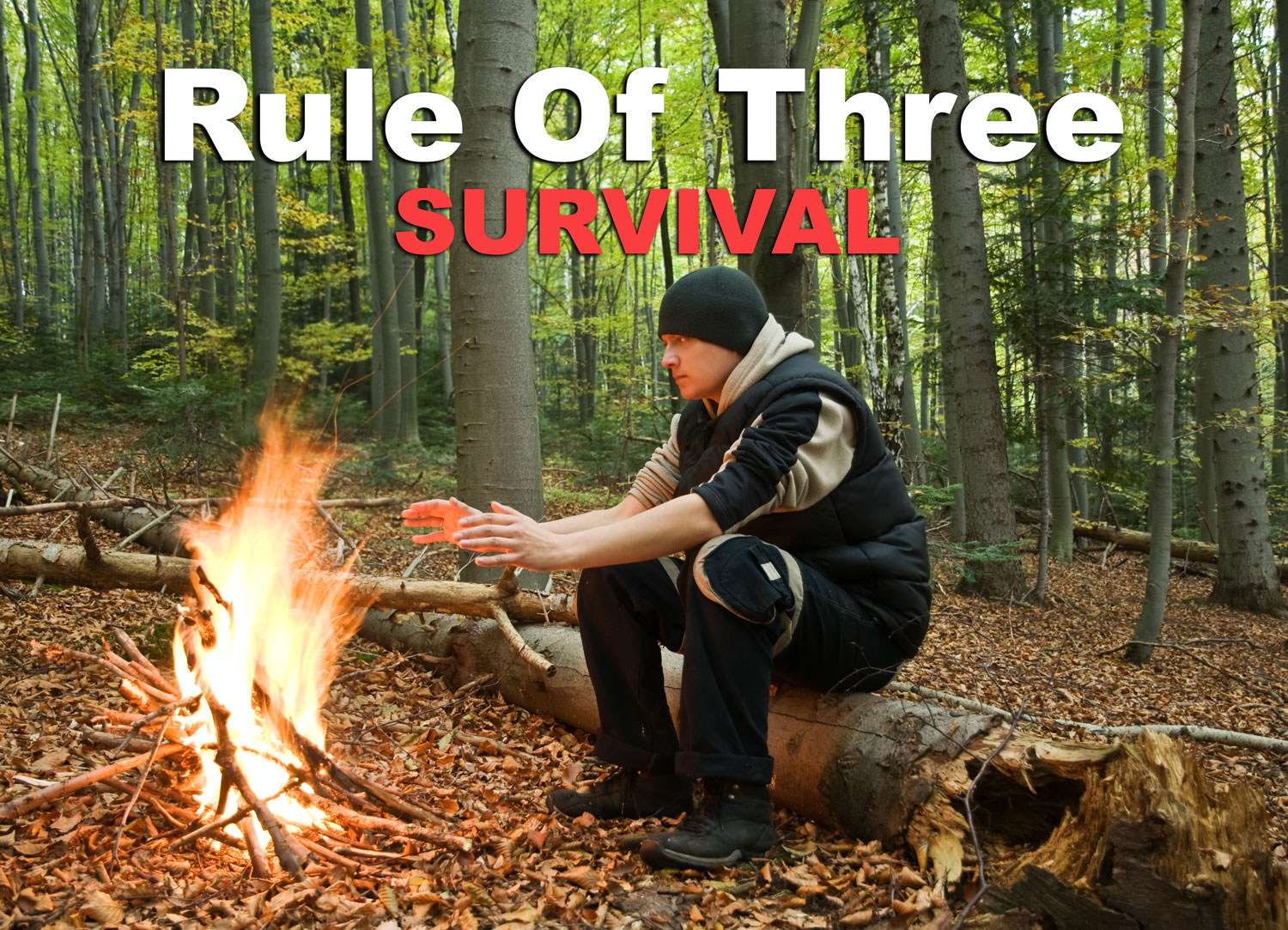 The survival rule of three is a widely accepted guideline about how long you can go without certain necessities
in an end of the world type scenario.

While ammunition may play very heavily into a survival situation, no amount of 308 is going to see you through a crisis if you haven’t also got the basic necessities at your disposal. In order of importance these are: air, shelter, water, and food. If you don’t have access to air, your supply of water is moot. If you’re in the Kalahari Desert with a pallet of K-rations but no roof over your head, you are not in good shape.

What Is The Survival Rule of Three?

The survival rule of three is a list of your priorities in a survival situation. It includes air, shelter, water and food.

Its name fits perfectly, as it measures the lengths of time you can do without given necessities in threes: minutes, hours, days, and weeks, respectively. Here are the four pillars of the rule of threes with a little more explanation.

We probably don’t have to familiarize you with asphyxia too extensively — the virtues of breathing are lost on very few. Asphyxia is what happens when the supply of oxygen to your body ceases or becomes insufficient. Drowning, hyperventilation, drug overdose, choking, and strangling can cause asphyxia, but so does exposure to excessive smoke or carbon monoxide.

Your brain requires 3.3 milliliters of oxygen per 100 grams of tissue per minute. When that level dips, your body will begin to redirect blood to your brain to compensate. That’s a temporary fix, of course. After three minutes without air, you’re dead as disco. The need for air is even more pressing while you’re submerged in water, as the average person can make it 30 to 60 seconds before they unintentionally breathe in water and pass out. Passing out in water is universally regarded as a bad move.

The three minute rule also applies while you are in icy water, whether you can breathe or not. Any longer than three minutes in the cold drink, and you’re going to end up like Leo in Titanic (but probably not as pretty).

“But wait,” you might say, “I frequently hold my breath for five minutes at a time as I’m diving for small clams and crustaceans off the icy coasts of the Aleutian Islands, and I’ve never had a problem.” If that is indeed your reaction to the three minute rule, then it is because you are a sea otter. In that case we are impressed by your ability to get on the internet, let alone read. 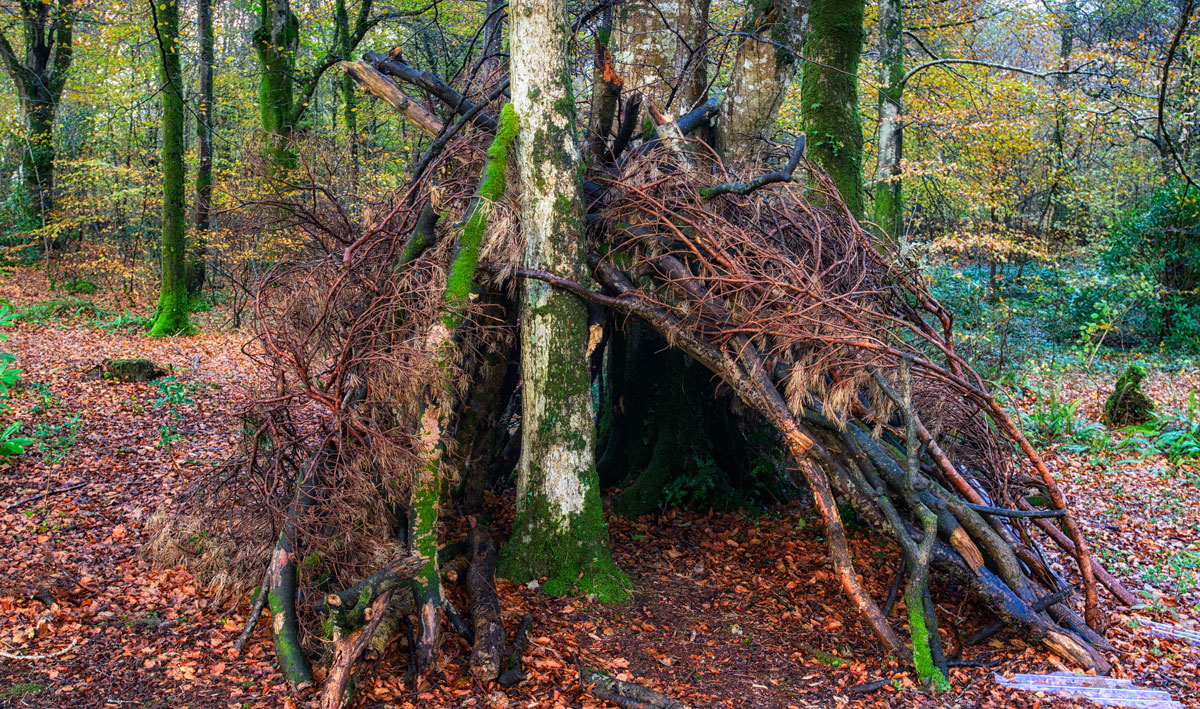 The rule of shelter depends heavily on where you happen to find yourself surviving. If you’re in a veritable Eden like Hawaii, you can probably go most of your life nude, opting only to take cover when it rains. If you’re on top of Mount Washington during a winter storm, failure to seek shelter will kill you in a matter of minutes, let alone hours.

In very hot climates it is crucial to keep your skin temperature at 92 degrees or cooler. (We’re talking about Fahrenheit, obviously, because we are not communists.) If your core temperature hits 104, you are looking at heat stroke. That can entail organ damage, seizures, coma, and ultimately death. Recovery from heat stroke may take one or two days in the hospital, which won’t be available during a survival situation. Find or create a source of shade pronto when it is very hot out, and drink plenty of water to preserve your ability to sweat.

In very cold climates it is crucial to keep your core temperature above 95 degrees. As soon as it dips below that point, you’ve started your adventure through hypothermia country. Hypothermia has four stages depending on your body temperature:

4. Profound (<68.0 °F): No vital signs; death. With one notable exception no one has ever come back from death, so avoiding the profound stage of hypothermia is highly advisable.

Up to 20 percent of hypothermia deaths follow the bizarre phenomenon of “paradoxical undressing.” Basically, people on the verge of freezing to death reason that shedding their clothing will help the problem. It won’t, so no matter how crazed the cold may drive you do not strip to your skivvies. At the very least you don’t want to leave something embarrassing behind for the search party to find. 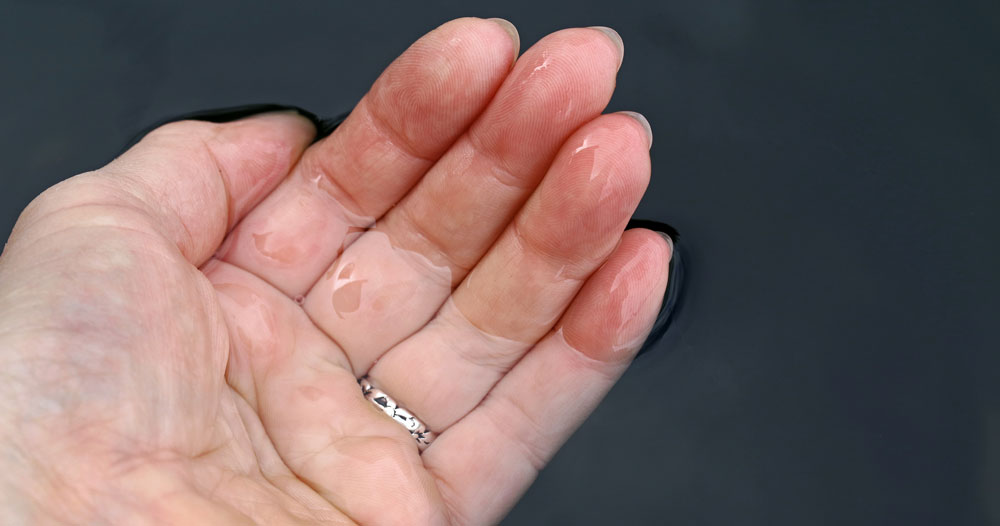 Obviously we’re using the word “water” loosley. If you find yourself in a survival situation with nothing but Sprite to drink, you’ll still be in good shape. (All the better if you’ve got a little vodka to mix in it.)

The average person can lose three to four percent of their total body water without suffering for it. A five to eight percent loss may cause fatigue and dizziness. A loss of greater than ten percent will send your mental and physical abilities spiraling downward, and you’ll be terribly thirsty the whole time. A loss of 15 to 25 percent means you’re probably dead.

Thirst is the obvious first sign of dehydration — it’s your body’s built-in indication that you must drink. Headaches, general discomfort, confusion, and fatigue can follow, with purple fingernails and seizures marking the final moments before death. It is important to note that the thirst response weakens with age. Even seniors who’ve unlimited access to water may suffer from dehydration simply because their bodies are no longer firing on all cylinders. If you’re old enough to remember a time before Disney World existed, you may need to take your age into account while gauging how much water you must drink to stay healthy.

The ideal amount of water to drink in a day is half a gallon. Your goal in a survival situation is to consume at least that much, as you’ll likely be undertaking heavy physical activity as well. Take care not to ration your water too aggressively. People have been found dead from dehydration who still had water in their possession!

During a survival situation you may finally find a use for all that fat you’ve been storing. In one medical study, researchers supervised an especially large man as he fasted nonstop for 382 days. The man didn’t come out any worse for the experience, and he was even less large thanks to it, but naturally that’s an extreme example.

Early symptoms of starvation include irritability, fatigue, apathy, and impulsivity — big obstacles during a survival situation where you must keep your wits about you. As starvation persists you will lose both fat and muscle tissue, and you may even lose your ability to perceive thirst. Starvation is painful and makes you more susceptible to disease, and vitamin deficiency carries a whole host of complications. (The large man in the scientific study did take regular vitamins to prevent issues like scurvy and anemia.)

An adult can actually go for as long as 12 weeks without food, but after the three week mark the ability to perform the actions necessary for survival weakens markedly.

Knowing where to hunt or scout for game like deer and having the right tool to harvest them, like a rifle with the right hunting ammo helps.

Not a hunter and not willing to forage? Once an average adult loses about 40 percent of their body weight, they die.

Generally, we associate the need for ammo to fall under this section of the rule of three. Though you could also make the case ammunition could help you defend your shelter.

Precisely how you should go about surviving depends on your environment, physical abilities, and skills. However ready or ill-prepared for a survival situation you may be, it is essential that you know what to prioritize. If you have not got food or water, still secure shelter first. If you are stuck in hostile weather, find refuge from it ASAP. And if you’re submerged underwater, stick your head out before you think about what’s for dinner. That last bit does seem rather intuitive, but there is just too much at stake to ever trivialize the rule of threes!