An article exploring the differences and advantages of lever action rifles versus bolt action rifles. We'll help you understand which might be better for your hunting or self-defense needs.

Hang around a rifle range, deer camp, or gun club for any amount of time and one thing becomes abundantly clear: shooters can argue the paint off the broadside of a barn. Gun guys (and gals) are very opinionated people, and we aren’t afraid to defend our favorite rifles to the death (and that’s only a slight exaggeration).

When it comes to rifle designs, things can get especially heated pretty quickly.

The action is the most important part of any rifle. The type of action determines how the gun loads, fires, and ejects cartridges. The action not only defines the rifle, it also determines the weapon’s inherent strengths and weaknesses.

However, which action is “better” mostly depends on how you plan to use your rifle.

Let’s take a closer look at two of the most popular rifle actions still in use today – the bolt action and lever action. Before we’re finished, you’ll have a basic understanding of how these designs work, the major pros and cons of each, and what jobs they do best.

The lever action may be America’s most important contribution to the world of firearms. First introduced in the mid 1800s by Colt (The Colt Model Ring Lever Rifle) and patented by Volcanic Repeating Arms (The Volition Repeating Rifle), the lever action rifle was the first successful repeating action ever developed.

Multiple lever action designs hit the market in the years leading up to the Civil War, including several long-standing designs by Winchester, Marlin, and Henry. Since then, nearly every successful lever action design has come out of the United States.

A symbol as American as baseball and Mom’s apple pie, the lever action rifle served American troops during the War Between the States, helped tame the American West, and has put more venison on the table than any other rifle design. 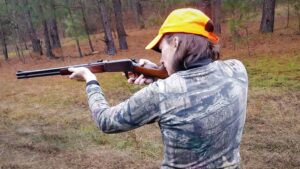 The Low-Down on Lever Actions

The lever action is a fairly basic design. When the lever is pulled down, the action moves the bolt and firing pin backwards, ejects the empty cartridge, and lifts a new cartridge into the chamber.

When you return the lever to the starting position, the new cartridge is pushed into the chamber, and the bolt and firing pin are pushed forward. Then, when you pull the trigger, the hammer strikes the firing pin, which then hits the cartridge primer, setting off a series of events that eventually sends the bullet out the muzzle and downrange toward your target.

Advantages of a Lever Action Rifle

Lever action rifles are fast, hold plenty of ammunition, and are one of the most reliable action designs ever created. Most models also have a consistent trigger pull.

Their relatively short barrels and flat-sided receivers make the average lever action perfect for stalking or hunting from horseback. It slides easily in and out of a saddle scabbard, sits nicely in the hand, and shoulders intuitively.

All these features have contributed to the lever rifle’s enduring popularity. However, the style’s stunning good looks and rich history may have done more to influence the design’s broad following than anything else. 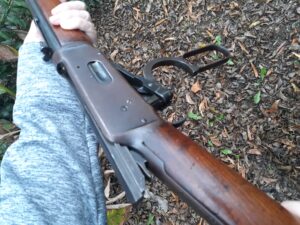 While there are plenty of things to love about the classic lever action rifle, it isn’t all sunshine and roses. The lever action has some drawbacks.

Cleaning a lever action is no easy feat. There’s a lot of disassembly that needs to happen before you can give it a good scrubbing. Some manufacturers actually suggest you tote your lever rifle to a certified gunsmith when it needs to be cleaned.

Most lever action models feature a tubular magazine located under the barrel. Since this type of magazine lines up cartridges end-to-end, modern ballistic tips or other loads with pointed projectiles can cause major problems. Some aerodynamic tips can become damaged in tubular magazines. Those pointy tips can also press against the primer of the cartridge in front of it, causing it to accidentally fire inside the magazine, particularly if the rifle is dropped.

.30-30 is by far the most common lever action chambering. Introduced by Winchester, this cartridge was the first cartridge to use smokeless powder and was actually developed specifically for their Model 1894. The Winchester ‘94 also happens to be the best-selling lever action rifle of all time, selling more than 7 million rifles over more than 100 years of production.

It’s well-accepted that lever action rifles are not as consistently accurate as bolt actions. There are several factors that just don’t work in favor of the lever action. The two-piece stocks and rear-locking bolts definitely play a part, as do the rear sight mounting slots that are cut right into the barrel. Plus, the forearm and magazine are strapped to the barrel with bands, which definitely looks pretty cool, but doesn’t afford the lever action any favors in regard to precision.

Who Needs a Lever Action 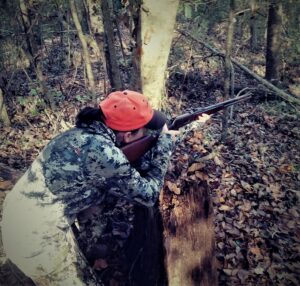 Even though we are well into the 21st century, the lever action rifle is far from outdated. A lever action is an awesome style for deer hunting. In fact, more whitetails have been harvested with lever action .30-30s than any other type of rifle.

If you hunt thick woods, especially if you prefer to stalk or hunt from the ground, it’s hard to beat a lever action rifle. It works well for deer, hogs, and black bear, especially within the typical 150-yard range.

My go-to gun for hunting in thick woods is a .30-30 Winchester Model 1894. It was my grandfather’s, and while nostalgia certainly plays a part in my feelings for this firearm, that isn’t the only factor. This rifle is ultra reliable when it comes to dropping whitetails, especially when those whitetails are moving fast through thick cover.

The very first bolt action rifle was designed in Germany by Johann Nikolaus von Dreyse in 1836. The Prussian army adopted his design in 1841. It was used until eventually ousted by the Mauser in the 1870s. Dubbed the Dreyse Needle Gun, this was the first mass-produced weapon that used breechloading technology.

During the American Civil War, the bolt-action Palmer carbine (patented in 1863) was used as a cavalry weapon by Union troops.

World War I marked the height of the bolt action’s military use. As the Second World War ensued, the military bolt action began to be phased out in favor of semi-automatics, although most WW II combatants carried some version of the venerable bolt action.

The bolt action still makes frequent appearances on the battlefield, but mostly as sniper rifles.

The Beef on Bolt Actions

The bolt action is also a beautifully simple design. While there is some variation between models, the basics are relatively standard.

The bolt consists of a metal tube that houses an internal firing mechanism. There are lugs at the front and back of the tube that lock the bolt into place during the firing process.

A handle, usually on the right side of the bolt (Sorry, lefties) is manipulated to unlock the bolt and open the breech cover. When the handle is pulled up and to the rear, the spent case is ejected from the chamber. Opening the bolt may also cock the weapon, depending on the model.

When the bolt is pushed forward, it loads a new cartridge into the chamber. Once the bolt is rotated back down to the closed position, the firing pin is unblocked. When the trigger is pulled, the sear releases the cocking piece which strikes the firing pin. As the firing pin makes contact with the cartridge primer, a series of reactions ensues that eventually propels a bullet from the muzzle, sending it downrange toward your target. 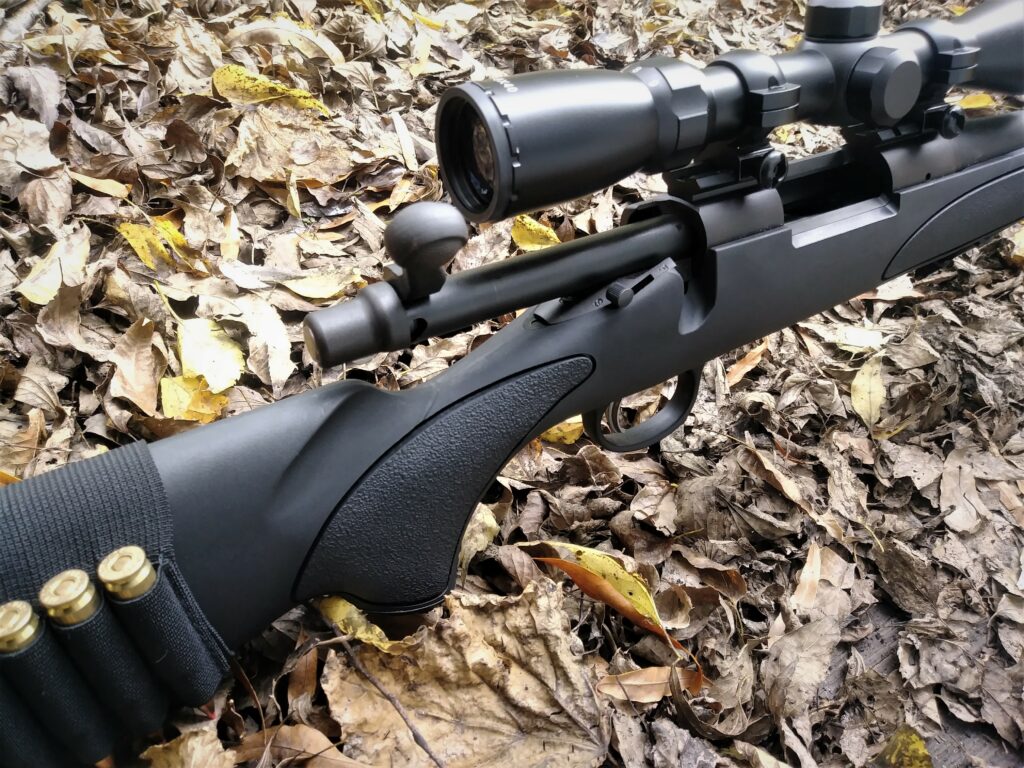 Advantages of a Bolt Action Rifle

Bolt actions are super strong, which means they can easily accommodate high pressure cartridges. With minimal searching, you can find bolt actions chambered for everything from tiny .22 LR ammo to massive .50 BMG cartridges.

The bolt action is generally considered the most inherently accurate of all the action types out there. Although accuracy has more to do with the person behind the rifle than the action, the biggest strength of the design is its repeatable precision. In the right hands, a bolt action is deadly accurate.

Perhaps the most abundant bolt action rifle ever produced is the Remington 700. This rifle got its footing in the 1980s and has served as the basic foundation for the US military’s M24 and M40 sniper rifles for almost 40 years. 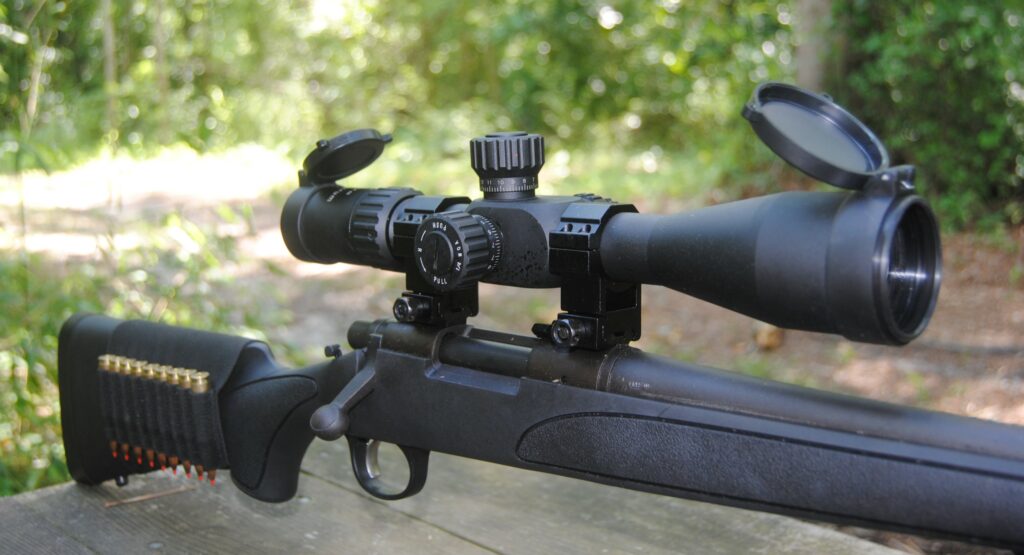 Cleaning a bolt action is a relatively simple affair. All you really need to do is remove the bolt (which usually requires a simple manipulation of the trigger or a switch) and you’re good to go.

Disadvantages of a Bolt Action Rifle

The one major disadvantage of the bolt action is they are slow to cycle. You need to remove your shooting hand from the trigger to manually feed and eject each round. (It’s even harder if you’re left-handed.)

While you can conceivably cycle the bolt from the shoulder, few shooters do it well. After that first shot, it can be hard to get back on target, which can delay accurate follow-up shots.

There are definitely shooting savants that can work a bolt gun faster than some of us can run a semi-auto. Even though I love to watch these guys run targets on Youtube, I’m not convinced they are actually human.

Who Needs a Bolt Action 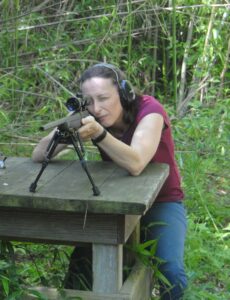 The bolt action has been around for what seems like forever. Its rugged simplicity and inherent accuracy definitely contribute to its enduring popularity.

A bolt action rifle should be your weapon of choice if you need to effectively reach targets at extreme distances.

If you need to drop tough targets, a bolt action chambered for a hard-hitting cartridge is a major asset.

For hunters, that means shouldering a bolt action when engaging big animals like elk, moose, and grizzles. Or, if you need to tap smaller targets (varmints, whitetails, antelope, etc.) over open prairie or harvested cropland, where the rate of fire isn’t nearly as important as accuracy, you’ll want to tote along a bolt action.

The lever action and bolt action have stood the test of time and remain relevant in the modern world. Which one is best? That’s largely a matter of opinion, although your style of shooting will play a huge role in forming that opinion.

If you’re having a hard time deciding between the two, you can always opt for something like the Browning BLR. Offering the best of both worlds, the BLR has a strong lock up like a bolt and a convenient lever extractor. It has a detachable magazine, so there’s no need to limit yourself to rounded bullets. Plus, it comes chambered for hard-hitting cartridges like .308 Win, .30-06 Springfield, .300 WSM, and 7mm Rem Mag. There’s even a take-down option. What more could a shooter ask for?