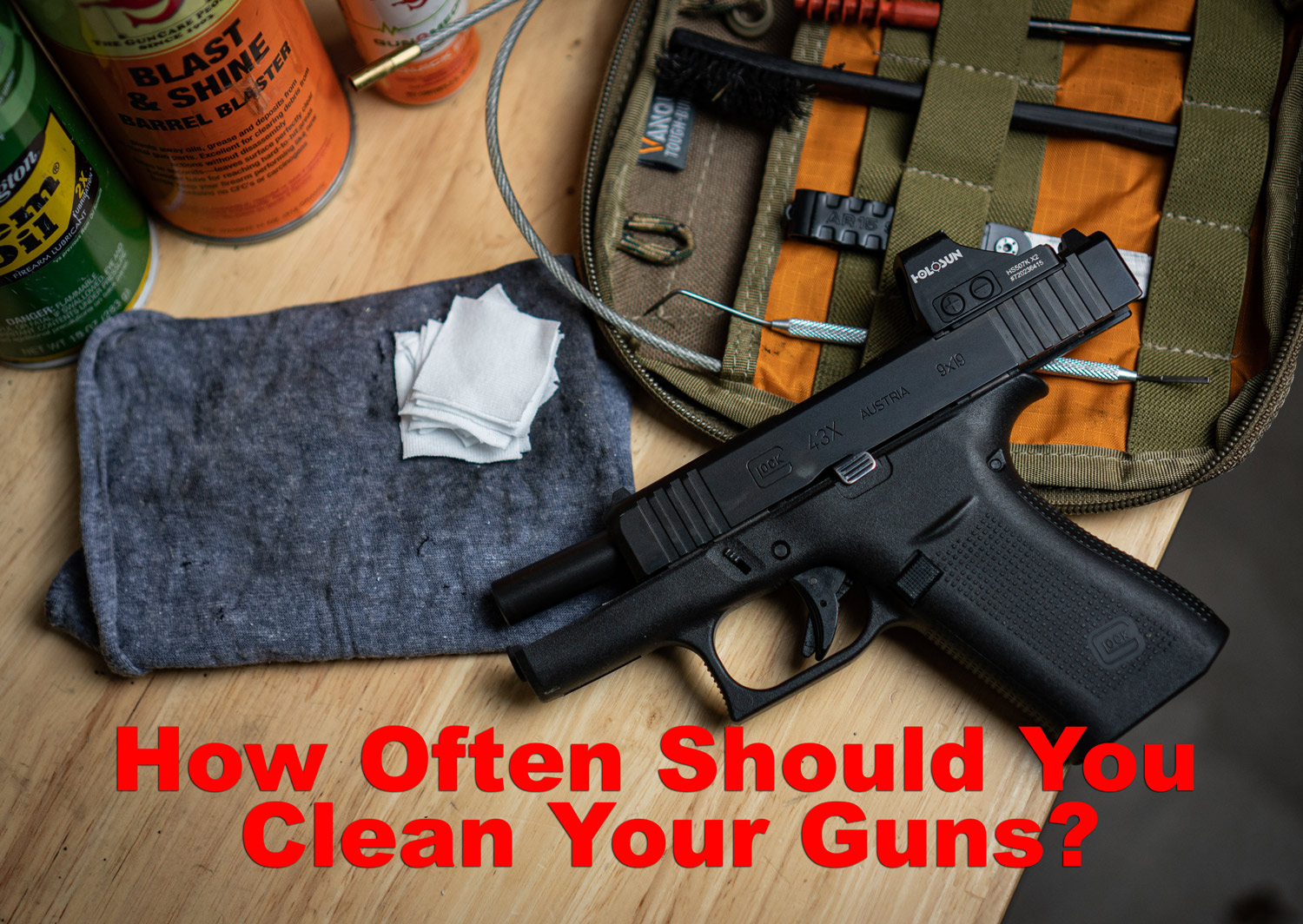 How often should you clean your firearms? Well, it largely depends on what you use them for and how often you shoot. We can help you set a routine for frustration free firing and operation without too much time spent with a cleaning rod in your hands.

How often do you need to clean your guns? That’s a question that gun owners have been asking for years. Like many firearm-related debates, you’ll find tons of opinions and answers. While we won’t settle the debate once and for all, we can provide some perspective on the issue and help you decide what a good routine looks like for you.

How Often Should You Clean Your Gun?

Why Clean Your Gun 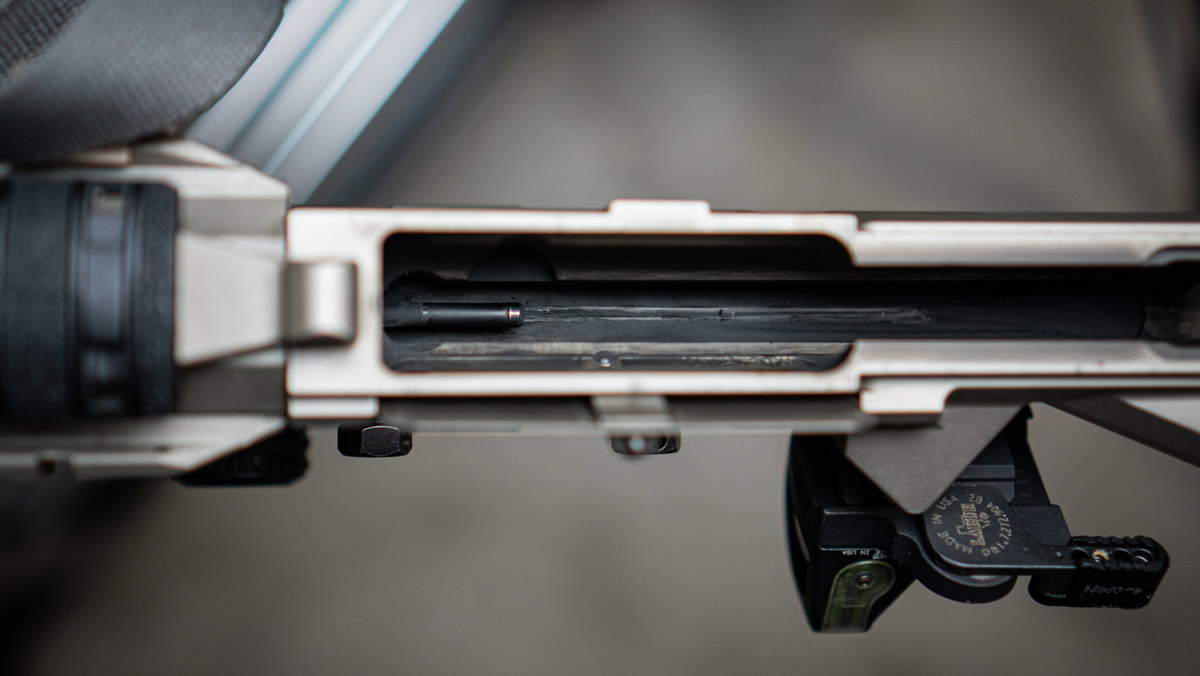 There are, of course, a variety of advantages to cleaning your gun. It helps preserve the quality, appearance, and performance of your weapon. This all leads to helping avoid malfunction. When you clean the gun, you are removing numerous contaminants that can reduce the weapon’s accuracy and performance. Substances from bullets can be left in the barrel, and while the difference may not be noticeable at first, steady buildup of contaminants can lead to problems, such as inaccurate shooting.

Proper cleaning can also reduce the chances of a malfunction with the weapon, such as residue causing problems with chambering or even the proper ejection of the bullet.

Cleaning helps the gun maintain its quality appearance, an aspect that should not be overlooked. This may only be cosmetic, but if your gun looks good on the outside, it says something about what’s happening on the inside. A clean, polished, shiny weapon is also something that you can carry and use with pride.

Are There Downsides to Cleaning?

For most people, there really are no downsides to cleaning your gun. In all reality most gun owners are probably cleaning their gun too little, and should not concern themselves with cleaning the gun too often; you’d basically have to be obsessive and compulsive about cleaning to clean it too much.

There is a concern, however, that cleaning the barrel too often with wire brushes will wear away the rifling and reduce performance. But the metal inside the barrel is much harder than the brush, so it’s unlikely to wear it out with regular, routine cleaning. Even over decades, a typical gun owner using quality equipment is unlikely to harm their weapon.

It is possible to use too much oil or lubricant. However, if you are wiping and cleaning properly, this won’t be an issue.

So when should you take the time to clean your gun? While you likely can’t clean too much, there are some specific situations when you’ll want to make cleaning your gun a priority.

You Should Always Clean Your Gun If…

There are also chemicals in some cartridges that are corrosive to the interior components. Potassium chloride and sodium chloride are used in some primers, especially old military surplus ammo. If using these types of rounds, frequent cleaning is best.

Water and metal rarely make a good mixture. If your weapon is exposed to rain or water of any type, a thorough cleaning and oiling is in order. Letting water sit on your barrel and other parts can damage the weapon and reduce functionality. This is especially important if your gun was exposed to salt water, which can be particularly damaging to materials of all types.

Dirt and sand, as well as leaves and debris from the outdoors, can reduce the functional performance of your weapon. Hunting shotguns and rifles (and pistols for that matter) should be cleaned after almost every outing to ensure long-lasting quality. 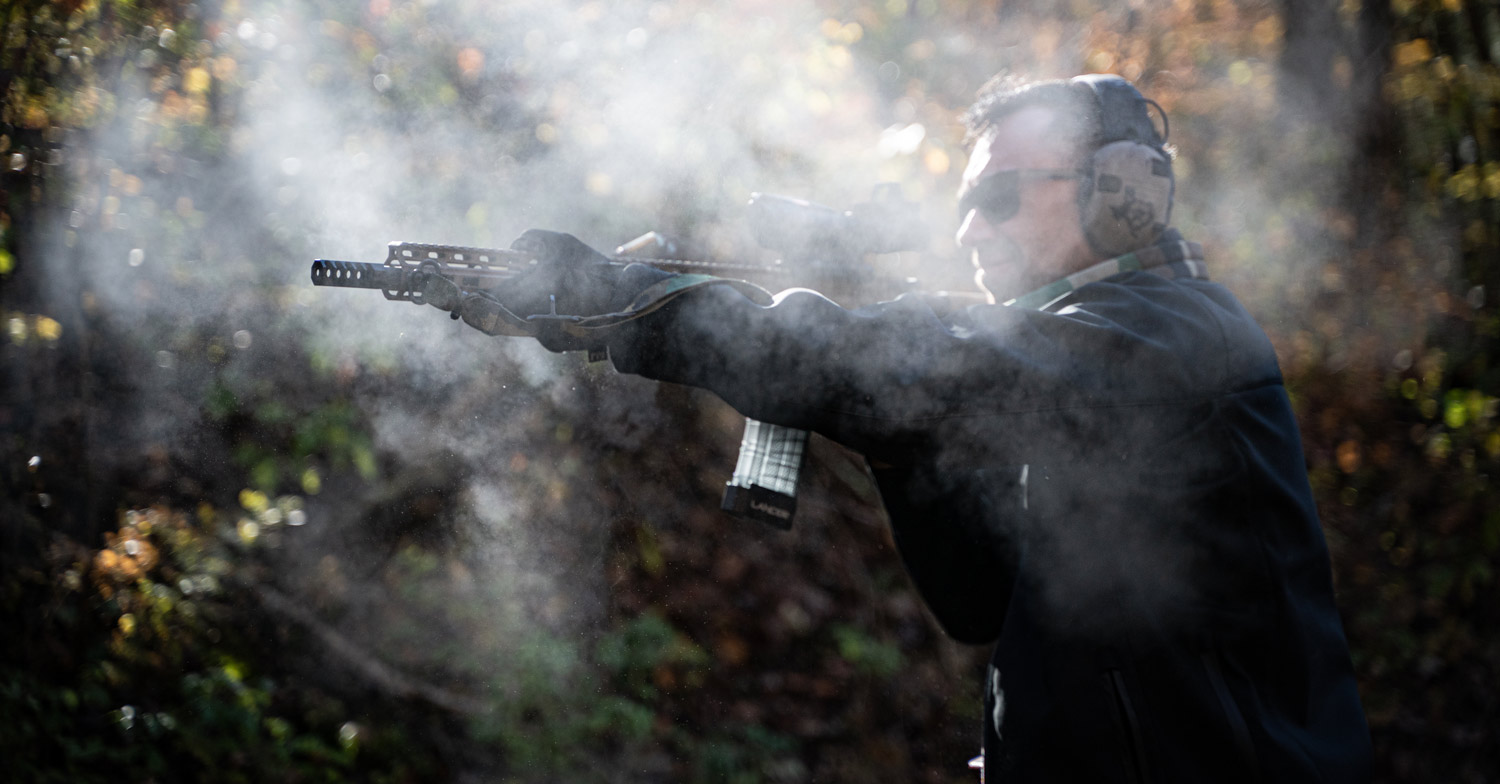 As you might expect, how often you clean your gun often depends on the purpose and use of your weapon.

Hunting shotguns, rifles, and pistols are often exposed to the harshest elements, which makes frequent cleaning necessary. Even if you are simply sitting in a stand and never fire a shot, you can have dust and debris on or inside of your firearm, so cleaning, at least on the surface components, will likely be a good idea.

Many hunters choose to pursue their game in the early morning hours, a time when moisture can settle onto your clothing, gear, and weapons. On grass, it’s called dew, on your gun, it’s called potential oxidation, which you know as rust.

For this reason, we recommend that you at least wipe down your hunting rifle or shotgun after each outing. This is regardless of whether you fired a shot.

When you are at the range, you likely fire more rounds in ten minutes than you do over a full season of hunting. This makes the cleaning essential, especially when you consider the types of ammunition you may be using.

Although many target-practice rounds are full-metal jackets, high-volume shooting often calls for affordability, which in many cases means lead bullets. Lead is affordable, but it it’s also softer, which means it can leave more residue inside your barrel.

In most cases, a quick cleaning of the barrel after hundreds of rounds can prevent particles from building up on the inside. However, if you fire thousands of rounds, you may need a more extensive cleaning.

Competition shooters demand the best performance from their guns. They can’t afford to leave anything to chance, so thorough cleaning is an essential part of the process. Most shooters, at least the ones that are serious about competition, will clean their rifles, pistols, or shotguns after every event.

More impactful than all other uses, a conceal-carry weapon should be clean and well maintained. If you are going to assume the responsibility of carrying a deadly weapon for your personal protection, you owe it to yourself to maintain that firearm to the highest degree.

But conceal-carry guns are (thankfully) rarely used. They sit idle, usually waiting for the next training or target-practice round. This creates issues for cleaning. If you don’t use your guns as frequently, they are more likely to collect dust in the crevices than fouling in the barrel.

Of course, you should clean your weapon after every training session. But if you are not using the weapon, cleaning it about every other week and inspecting it for quality is likely the best choice.

Find the Ammo You Need at a Price You Can Afford

When you need top-quality ammunition for your hunting, target, or self-defense needs, visit ammotogo.com. We have a full selection of affordable rounds that fit your gun-owning lifestyle!