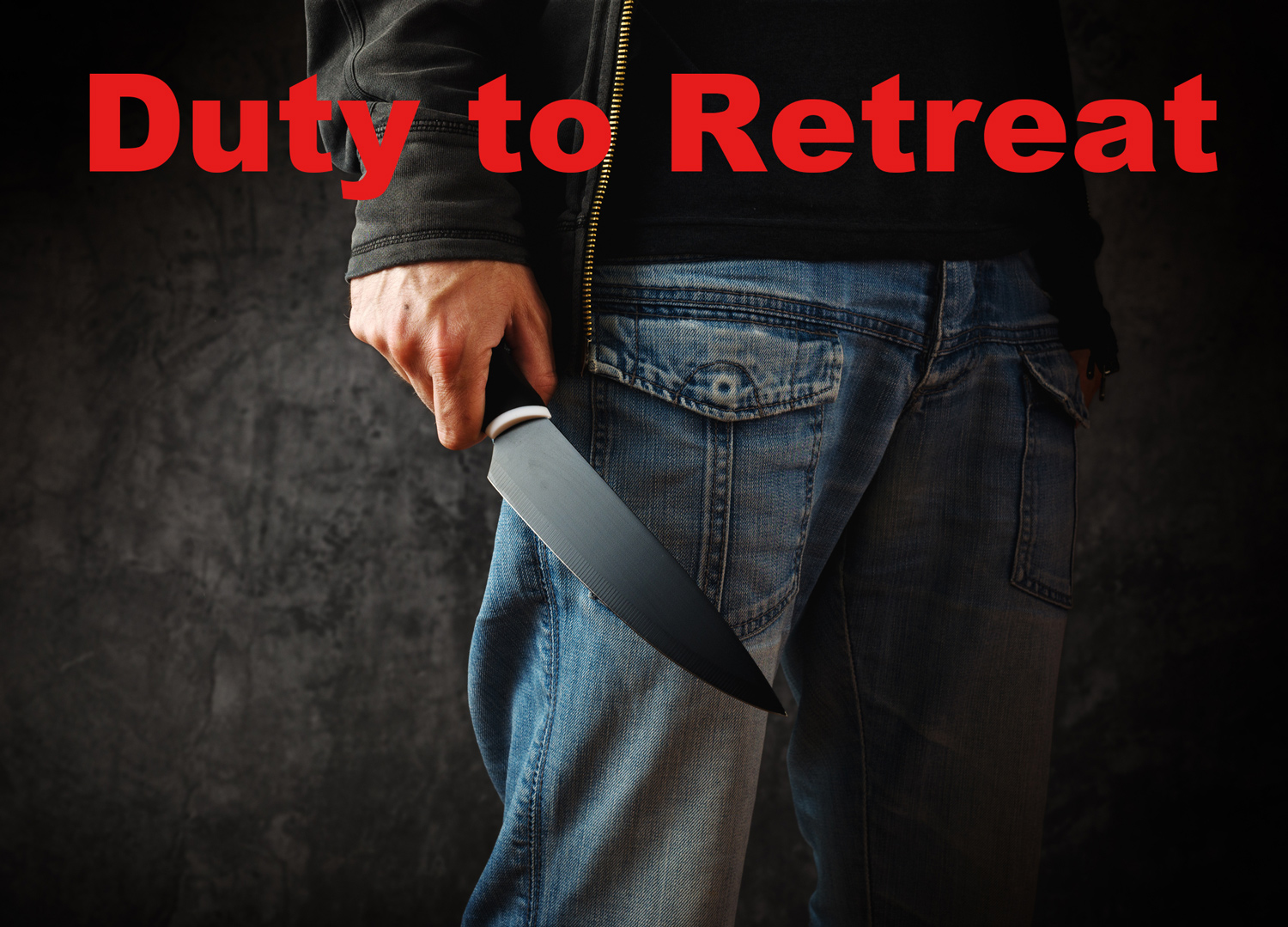 What is Duty to Retreat when it comes to defending yourself and your family? Knowing the law is more than half the battle when it comes to being a responsible gun owner and avoiding potential legal trouble on the worst day of your life.

As a gun owner, it’s your duty to maintain safety and integrity whenever you use your firearm. Whether you are plinking at the range or legally concealing a pistol for personal protection, you owe it to yourself and your fellow citizens to be responsible at all times. Issues like proper gun storage and safe barrel control are essential to all gun owners.

If you use a weapon for conceal-carry purposes, knowing the law is critical. It’s not just about where and how you can carry the weapon. The law also dictates how you can legally use the weapon.

As you likely know, some states have “stand your ground” laws, while others use a “duty to retreat” model. Understanding the difference is critical, as it impacts whether your self-defense actions are legally justified.

How Is “Duty to Retreat” Different Than “Stand Your Ground”

Eugene Volokh, a Professor of Law and UCLA and author at Reason.com sums up the difference well:

In early January of 2021, the governor of Ohio signed a bill that essentially turned the 7th-largest state (by population) from a “duty to retreat” into a “stand your ground” law. This made Ohio the 36th state, according to the article, to have stand-your-ground laws.

What is “Duty to Retreat”

The exact interpretation of “duty to retreat” depends on the state code. It could also rest on how judges and juries interpret the law. However, duty to retreat essentially means that you, the gun carrier, have a legal responsibility to remove yourself from a confrontation if possible. If you fail to retreat (or attempt a retreat) from a threat, you lose a right to legal self-defense through deadly force.

You can still defend yourself under duty-to-retreat-laws. But your first effort must be an attempt to remove yourself from danger.

In most cases (again, state and legal interpretations matter), states with these laws allow you to defend yourself as long as:

If your situation meets these basic requirements, you are likely justified in using deadly force to defend yourself.

It’s important to note that duty to retreat does not mean that you can never use your weapon outside the home or vehicle. It simply means the legal definition of justified force is more restricted. If a deadly confrontation occurs outside of your home or vehicle, and you do not see a completely safe way to escape, use of deadly force is justified. For example, if the aggressor has a firearm, you could likely make the case that it’s virtually impossible to run from the attacker without exposing yourself to danger. Under this situation, use of a firearm in self-defense could be justified, even under duty-to-retreat law.

What is “Stand Your Ground?”

While they are often contrasted against each other, and spoken about as two completely opposite laws, the differences between “duty to retreat” and “stand your ground” are smaller than you might think. In reality, “stand your ground” has all the same basic requirements. Just like “retreat” laws, it allows you to defend yourself if you are not the aggressor and you believe you are in danger.

The only change, and this is the critical difference, is that if an incident occurs in public you do not have to prove that there was a chance to escape bodily harm.

The law, like any law, law imperfect. It is not, however, a legal mandate to “shoot first and ask questions later,” as has been said by critics. You still need to be in imminent danger and cannot be the immediate aggressor. It’s fair to criticize and debate the law, but framing it as shoot-first legislation seems overly largely political and somewhat disingenuous.

Stand Your Ground vs. Duty to Retreat States 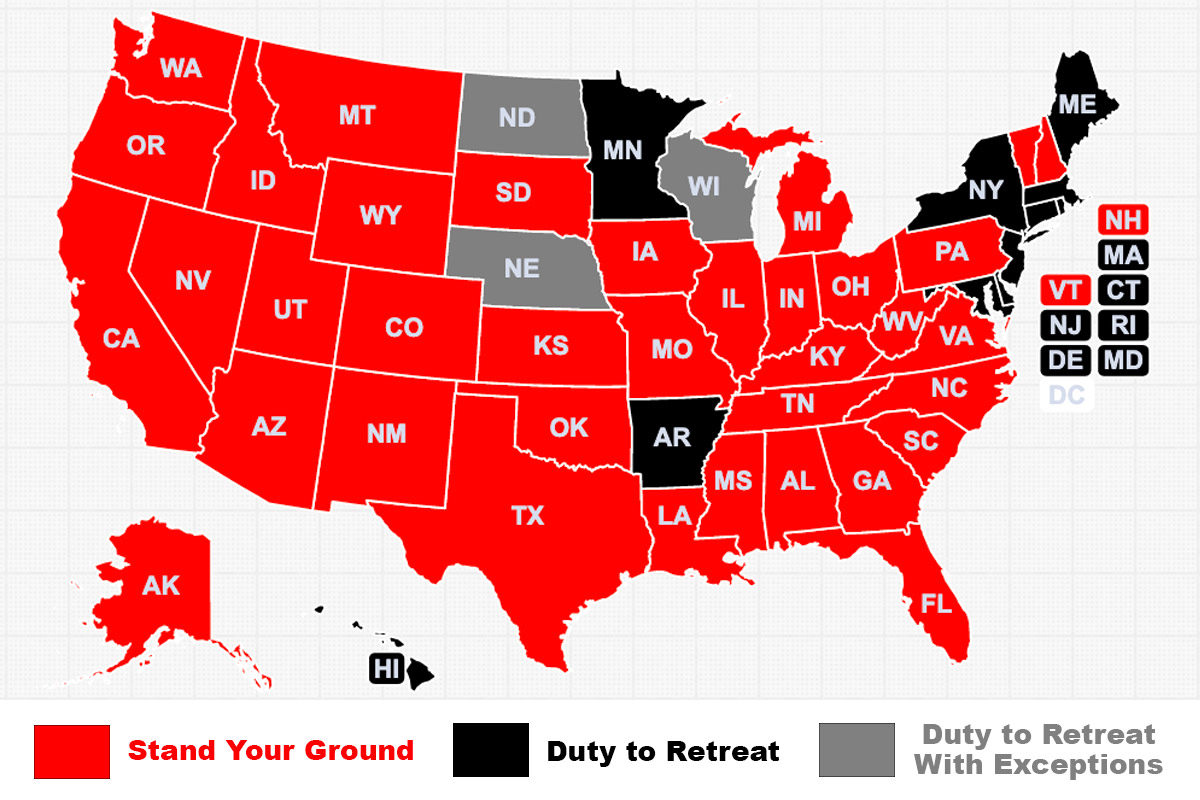 The majority of the United States are Stand Your Ground states. 36 states have a classification that’s come through a passed state statute or some form of precedent. This precedent can include case law or jury instructions from past court cases.

There are 15 states that put a duty to retreat upon gun owners when they can retreat with absolute safety. Several states included in the Duty to Retreat category do have carve outs that insert more of a Stand Your Ground law in certain environments. For instance, Wisconsin has a Duty to Retreat law with caveats if you are in your own home, vehicle, or workplace. In New York, the law doesn’t require you to retreat if someone threatens you with robbery, burglary, kidnapping or sexual assault.

The District of Colombia falls somewhere in between the two approaches as well. In D.C., “The law does not require a person to retreat,” but “in deciding whether [defendant] and reasonably at the time of the incident believed that s/he was in imminent danger of death or serious bodily harm and that deadly force was necessary to repel that danger, you may consider, along with any other evidence, whether the [defendant] could have safely retreated … but did not.”

When Can You Never Use Deadly Force?

There are situations when you are never allowed to use deadly force, regardless of the state laws. For example, you can’t use deadly force unless there is a reasonable threat to your life or the threat of a serious crime, such as rape of kidnapping. In some states, but not all, this includes robbery as well.

You also can’t legally use deadly force in retaliation once a threat has passed, and deadly force is not allowed if there is the threat of simple assault but no clear indication that your life is at risk. (This last one is clearly a murky issue.) For example, if you are slapped by someone in public, you very likely won’t be legally justified in using deadly force.

How Might the Differences Play Out in a Situation

Imagine you are in a life-threatening situation. You are in public and outside of your car, and have a reason to believe that your life is in danger. You fire your weapon and kill an attacker. It’s a situation that we all hope never happens, but imagine it happened to you.

Up until now “stand your ground” and “duty to retreat” were theoretical. Now the legal process impacts you life.

Under “stand your ground,” you would only have to prove, or provide a significant argument, that you were not the original aggressor and that you had a strong reason to believe your life was in danger.

Under “duty to retreat,” you would have to show that you were not the original aggressor, there was a significant threat, and you could not safely escape. That’s the difference in a nutshell, but it’s a difference that could be the difference between jail in one state and freedom in another.

The interpretation and description of these laws in incredibly complex, so it’s up to you, the gun owner, to understand the law and practice safe, responsible use of your weapon.

Knowing the law is a critical part of responsible gun ownership. You owe it to yourself, as well as the gun-owing community and the public at large, to stay informed on all the legal issues impacting your use of deadly force.