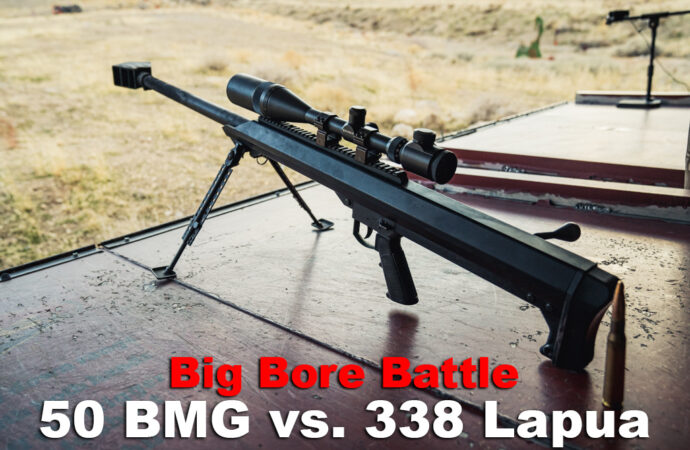 It's a battle - two colossal rifle calibers, 338 Lapua vs. 50 BMG. Which of these is best for your long-range shooting needs?

Not satisfied with common cartridges like the .30-06 Springfield or the .223 Remington? Perhaps it’s time to move into larger, longer, more powerful rounds? Well, welcome to the thunder dome. Prepare for a lot of power as we bring the noise in this 338 Lapua vs. .50 BMG comparison.

Both of these cartridges will give you big distance at the range, easily impressing even the most experienced sharpshooters and long-range hunters.

Getting to Know the .50 Cal BMG 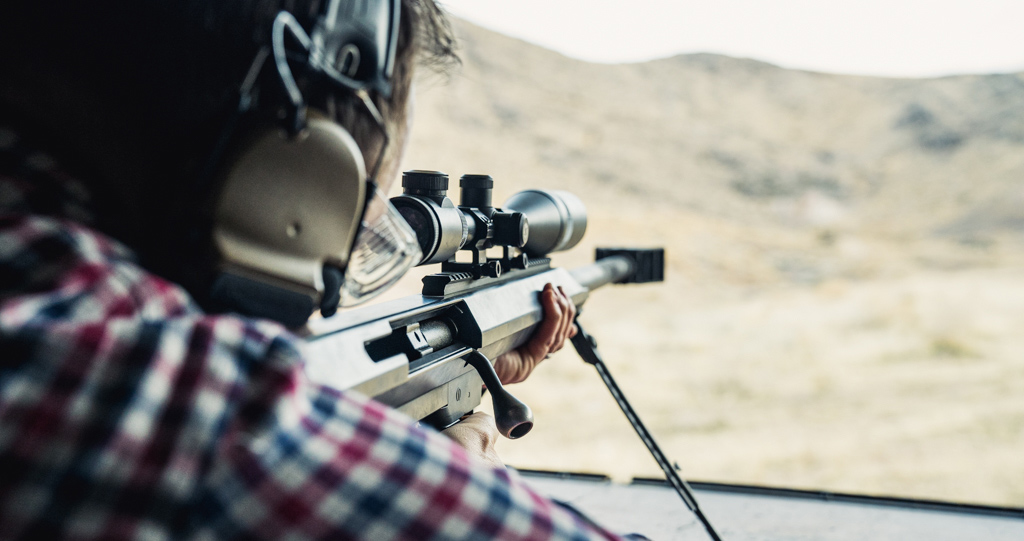 Before and during the first World War (1914-1918), militaries on both sides started to develop armored artillery vehicles that would become the modern tank. In direct response, they also started to develop rifle cartridges that could punch through the enemy’s armored protection. After the war, designers continued to create anti-armor cartridges; for American forces, this lead to the .50 Browning Machine Gun or “.50 BMG,” a large, powerful round that, even to this day, can penetrate the sides of many armored vehicles.

It has become one of the most dependable cartridges for American and NATO forces, and it has seen major use in practically all conflicts involving American troops. In civilian circles, it is used for recreational shooting, competition, and even hunting large animals at significant distances.

Getting to Know the .338 Lapua Magnum

The .338 Lapua Magnum, also known as the “.338 Lapua” or “.338 Lapua Mag,” is a newer addition to the world of rifle shooting. Designed and released in the late 1980’s, this cartridge gives shooters a long-range shot with excellent terminal ballistics. It’s become one of the most prominent sniper cartridges in the world, and it has enough force to penetrate body armor at even long distances.

Although a popular round for highly-trained military personnel, it’s also useful for civilians. It makes an enjoyable target-shooting cartridge, and it can be used for hunting virtually any large game in North America and beyond.

We had a chance to sit down with both of these rifles thanks to our friends at Shoot Las Vegas. Their 500-yard range and in-house rifle options gave us a chance to compare both of these firearms and calibers side-by-side. 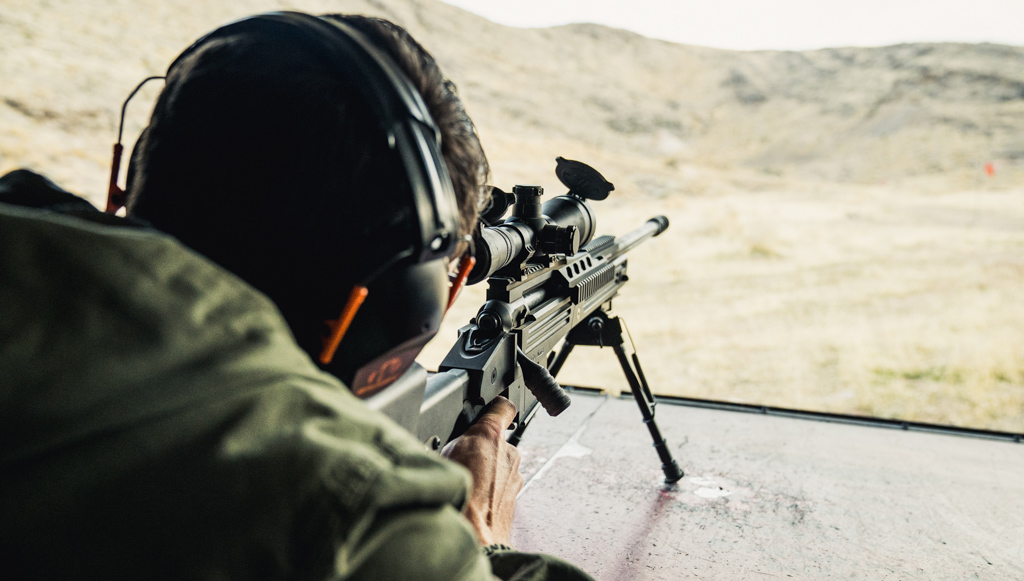 The owner of a large RV camper was once asked about the vehicle’s miles-per-gallon; his response was, essentially, “if you’re worried about the cost of gas, don’t buy an RV.”

A similar statement could be said for both of these cartridges, as neither is priced for thrifty shooters. But it’s still worth looking at the prices, and we see that the .338 Lapua Magnum tends to be slightly more affordable, most likely because of the smaller size.

So, the .338 Lapua Magnum appears to have a larger range of pricing. (This is likely due to a larger selection of .338 rounds.)

There is plenty of overlap, but it appears the .338 Lapua, while certainly not cheap, is slightly more affordable.

Like pricing, there is a lot of overlap in velocity, and neither has a clear, obvious advantage. However, when you start to look at the range of muzzle velocities, and also look at the specific velocities of similar products, we see a slight advantage for the .50 BMG.

We can start with the Hornady match rounds we compared above. In this case, the 750-grain .50 BMG round has a velocity of 2,820 feet-per-second (fps), while the Lapua has a muzzle velocity of 2,745 fps.

If you take a broader look at velocities, you see that there is plenty of overlap. Many .338 Lapua Magnums go above and beyond 3,000 fps, but, in general, the .50 BMG will have more available cartridges with higher velocities, both at the muzzle and downrange. This is slightly surprising, as you might assume the smaller bullet size of the .338 Lapua Magnum would result in faster speeds, but the .50 BMG’s massive case, which means more propellant, launches the projectile with greater velocities. 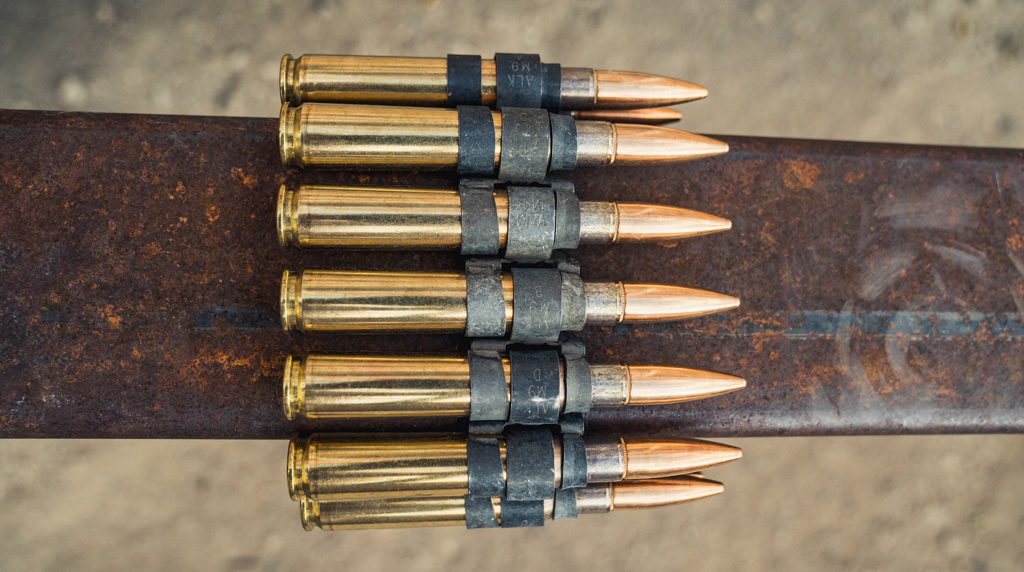 Finally, we have a clear winner. Or, more accurately, a blowout.

The .50 BMG is one of the most powerful cartridges available to the general public. Thanks to blazing speeds and a massive bullet, this cartridge hits with a force that can drop the largest game animals in the world, including grizzly bear and moose. The .338 Lapua Magnum is no weakling, it just can’t keep up with the overpowering force of the BMG.

The Hornady products cited above make this point. The .338 Lapua Magnum (285 grain) has a muzzle energy of 4,768 foot pounds (ft-lbs.) . After traveling 500 yards, it still has an energy of 3,064 ft-lbs, which makes it more powerful than almost all rifle cartridges. But not all.

The .50 BMG has more force pushing the bullet forward, so you might assume that it would have less drop downrange. But the .338 Lapua Magnum could also have less drop thanks to the significantlylighterbullets. So which is it?

The Hornady rounds we have already discussed highlight this trend. When zeroed to 250 yards, the 750-grain BMG drops 35.8 inches when it travels 500 yards. The 285-grain .338 Lapua Magnum, despite a lighter projectile, drops 40.3 inches. This is seen consistently, as the .50 BMG tends to have less drop across numerous products.

Like price, if a soft recoil is your priority, neither of these cartridges is right for you. However, we can confidently say that the .338 Lapua Magnum, despite being one of the more powerful cartridges available, is easier on the shoulder than the hard-hammering .50 BMG.

In general, the cartridge with the most muzzle energy will also have the hardest kick. This can be affected by the type of rifle being used, as well as the shooter’s technique, but as we know from Newton’s law of equal and opposite reactions, if the forward force (towards the target) is high, so too will be the backwards force into your shoulder.

In conclusion, you can see that either of these cartridges will deliver outstanding performance. Both allow you to place accurate, powerful shots at distances beyond the reach of other rounds. But when selecting the right one, you need to decide if saving a little money or having a softer kick would be worth it. However, if you want to deliver a long-range shot with outstanding power, and you’d also like to impress everyone at the range, the .50 BMG could be your new favorite cartridge.

Truly, a 338 Lapua vs. 50 BMG comparison is like a heavyweight title fight compared to many other lightweight options out there.