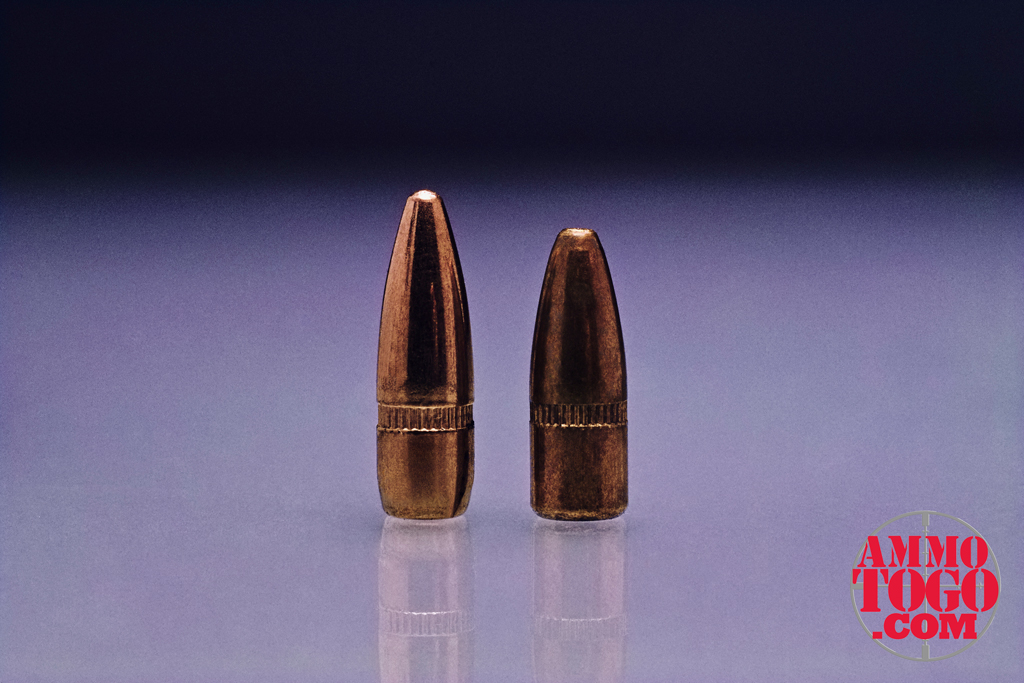 You’ve likely seen both “FMJ” and “FMJ-BT” ammunition listed as you’ve shopped for rifle ammo. Does it matter if you select boat-tail ammunition and what is the point of it?

There are a lot of acronyms floating around in the ammunition industry. Some are better understood than others.

While most casual gun owners understand that FMJ stands for Full Metal Jacket and HP stands for hollow point. You may not know what HMR, LRN, or BBWC stand for. (For the curious, that’s Hornady Magnum Rimfire, Lead Round Nose, and Bevel-Base Wad Cutter, respectively.)

Another acronym that you may not know, but one that you’ll see often is “BT,” for Boat Tail. It’s often on the ammo box as “FMJ-BT” or “FMJBT”. A boat tail is a bullet feature that is specific to a number of calibers of rifle ammunition, and it’s intended to improve the accuracy and trajectory of medium to long-range ammunition.

Your Guide to Boat Tail Ammunition

What is a Boat Tail Bullet?

Traditional rifle bullets have what is called a flat base. With this design, the base of the bullet is flat. It runs at a perpendicular angle to the sides of the bullet. Essentially, if you hold the bullet upright and you look at it from the side, the bottom of a flat base will have 90-degree angles at the corners.

A boat tail bullet is tapered toward the base, narrowing slightly as the bullet reaches the base. This shape resembles the stern of a boat, which narrows slightly towards the back; hence the name “boat tail.”

The principle of this design is essentially the same at that of a boat. The tapering, or narrowing, at the back helps reduce drag.

Look at the image below. In each pair of pulled bullets, you can see the boat tail projectile on the left and the flat base bullet on the right. It’s a subtle but if you’re looking for precision, it can make a difference.

The main advantage to using a boat tail bullet is increased accuracy, or more accurately, increased wind resistance. The purpose of a boat tail is to provide a more stable flight by increasing the ballistic coefficient…

To fully understand the performance of a boat tail bullet, it helps to understand the concept of “ballistics coefficients.” This is essentially the measurement of a bullet’s streamlined or aerodynamic performance. It is measured by calculating the ratio of a bullet’s sectional density to its “coefficient of form.” That might sound overly technical and complicated, so just remember that the higher the number, the better the bullet performs from an aerodynamic perspective.

Comparing ballistic coefficients in bullets can be difficult because lining up all the variable in perfect order can be almost impossible. Therefore, making a straight “apples-to-apples” comparison can be hard. However, there are a few manufacturers who create very similar bullets in which one has a boat tail and the other does not.

Hornady, one of the top innovators in ammunition, provides bullets for reloading purposes, including a .303-caliber full metal jacket with a boat tail and a .303-caliber round nose with a flat base. Both are 174 grains, giving us a fairly consistent comparison.

You can see this pattern repeated across many products. Again, it can be difficult to lineup the variables perfectly, but you’ll generally find that bullets with a boat tail have a higher ballistic coefficient (and therefore better aerodynamics) than bullets with flat bases. So, here’s the point of practical action: If you’re shopping 223 or another rifle ammo and you come across a deal on PMC’s 223 FMJ-BT ammo, you might select it over a round that doesn’t offer the more refined, boat-tail bullet if the prices are similar.

Performance in the Field? Does it Matter?

Talking about numbers, mathematical equations, and ballistic coefficients makes you sound smart in a barroom discussion, but what does it mean when you take to the field or the range? When hunting or simply shooting targets, what types of performance differences can you expect? As you probably guessed, the comparisons are once again difficult, but we can find a few products to lineup.

According to Sierra, one of the most respected bullet manufacturers in the country, the boat tail “significantly reduces the base drag,” which pulls at the back of the bullet. Reducing drag gives the bullet three distinct performance advantages:

Shooting indoors is a great way to reduce variables and ensure accurate shot placement. However, if you are shooting outdoors, you will eventually have to deal with cross winds. Placing the bullet at the vitals is crucial for long-range hunters and boat tails can reduce the effects of cross wind on a bullet.

As the bullet travels from the barrel to the target, it will slow down and loose forward energy. Having a bullet that maintains speed and energy is once again crucial to long-distance rifle hunters, making boat tail an ideal choice when energy and mushrooming is required.

As the bullet loses speed, it also drops rapidly. With boat tail bullets, there is generally a reduction in drop, resulting flatter trajectory. This makes for superior shot placement for both hunting and target shooting.

Are there Any Disadvantages for Boat Tail?

To be honest, there really aren’t a lot of disadvantages to using boat tail ammunition.

There is a theory that gas in the barrel could escape ahead of a boat tail round, disrupting performance, but the results seem negligible. The prices of boat-tail ammo may be slightly higher, but not so high that you would avoid using these rounds over others.

Bottom Line: Boat Tail May Only Have Noticeable Affect for Elite Shooters and Distance Hunters

The bottom line with boat tail is that most shooters and casual plinkers will not notice an extreme difference in performance. However, if you are an experienced competition shooter or need a round for a clean hunting shot at 400 or 500 yards, you may find the boat tail is an ideal choice. Be sure to practice with both boat tail and flat-based options to see which works best in your rifle and shooting conditions.