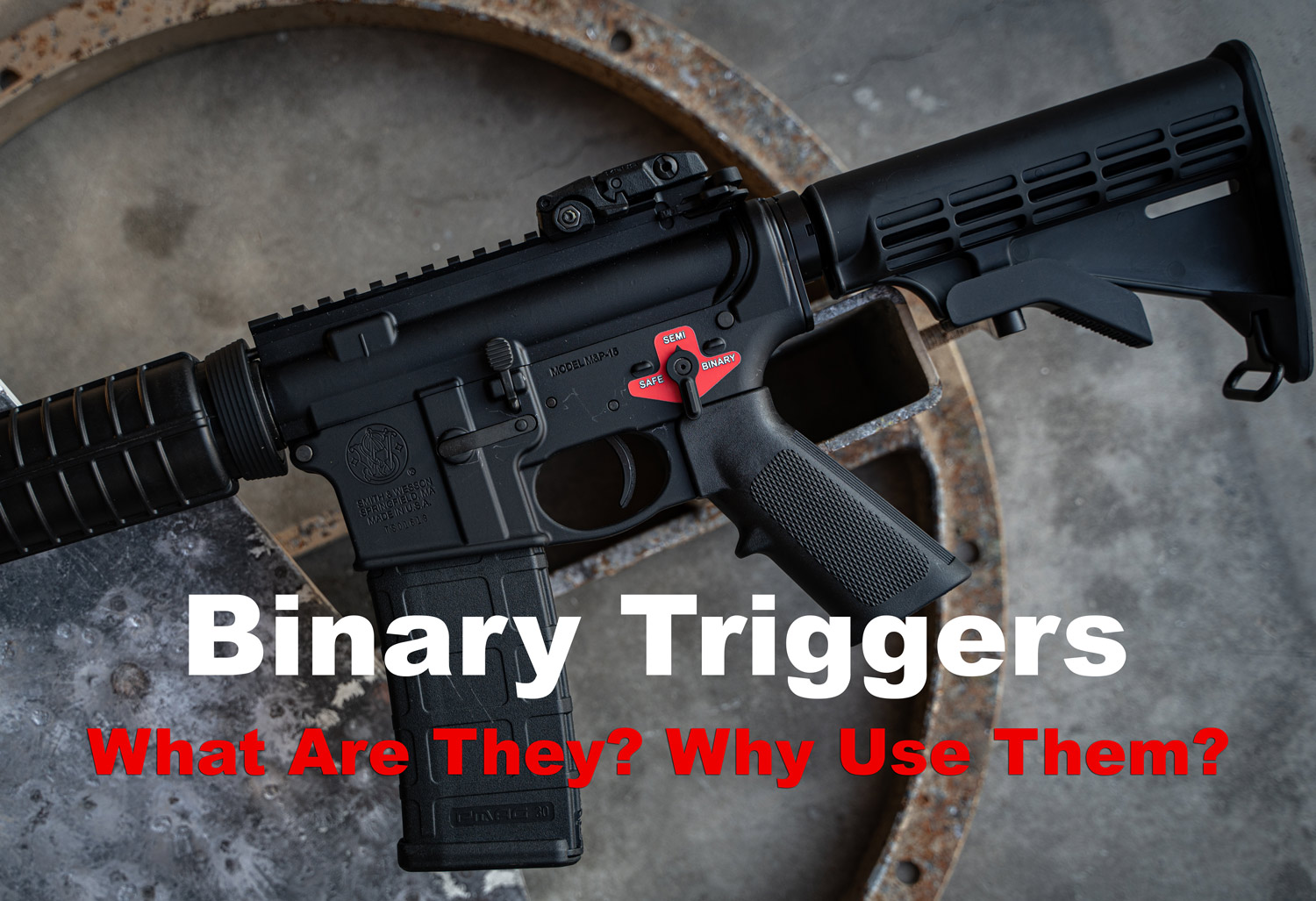 A guide to binary triggers – what are they and are they something you should consider for your competition rifle or home defense gun?

Have you ever wished you could shoot through ammo faster? While you can always take out a second mortgage on your home and get a registered machine gun, there is another way for you to burn through rounds.

A binary trigger can step up the speed at which you send lead downrange. As an extra bonus, they don’t require all the nasty paperwork that comes with buying a Tommy Gun.

But are they worth it? And are they legal?

Let’s take a closer look at these controversial aftermarket accessories.

What is a Binary Trigger?

A binary trigger (sometimes called an echo trigger or double tap trigger) is a special kind of semi-automatic trigger that allows you to significantly increase your rate of fire. Unlike a standard semi-auto trigger, a binary trigger has two modes of firing. The first setting lets you fire off a single round each time you press the trigger, just like any boring old semi-automatic weapon. .

Some firearms come straight from the factory outfitted with a binary trigger. However, these triggers are more commonly used as a drop-in replacement for your factory trigger.

How Does a Binary Trigger Work? 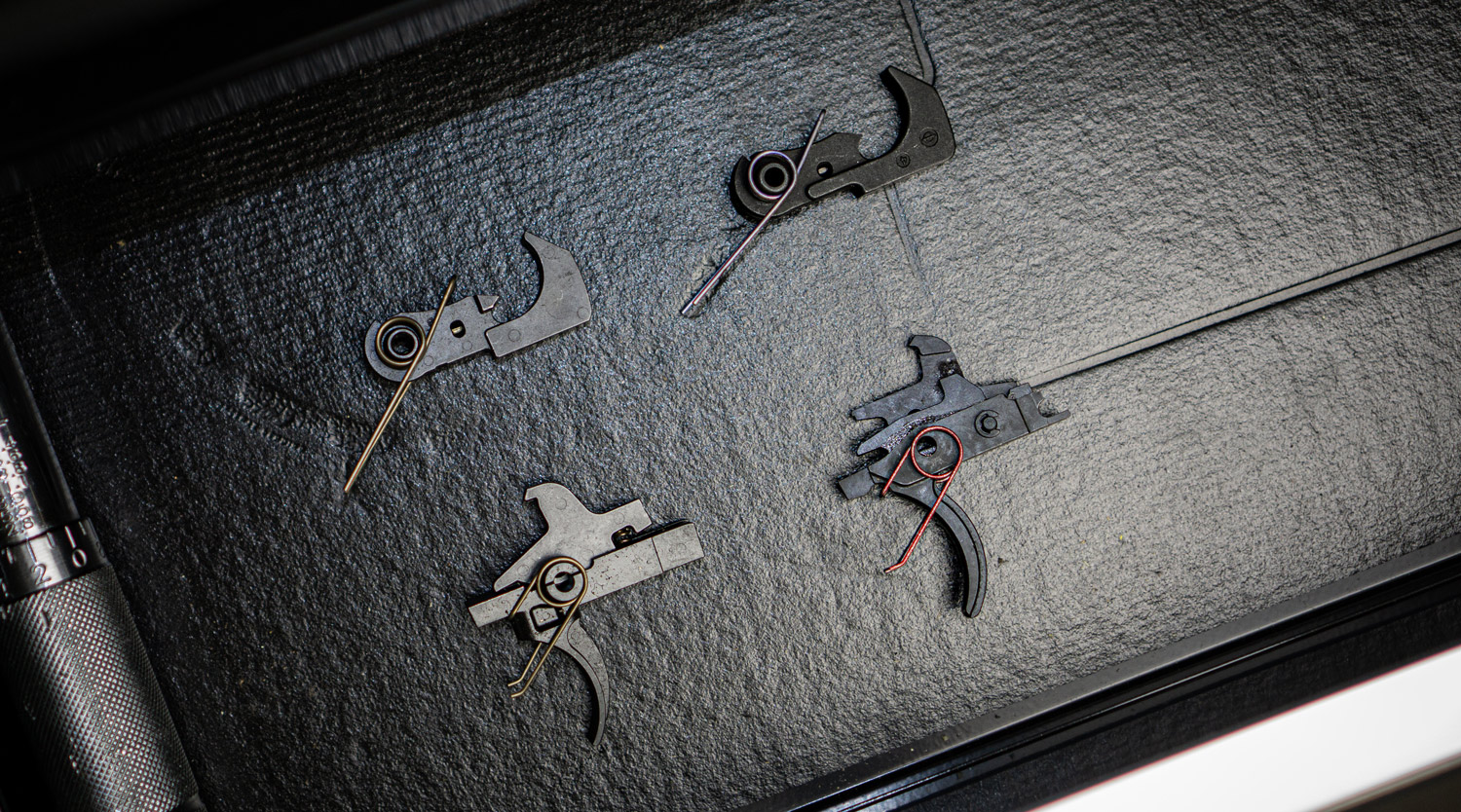 When you’re shooting a semi-auto trigger, a handy little mechanism called the “sear” holds the hammer back until the right amount of pressure has been applied to the trigger. Once that happens, the sear releases the hammer, which then strikes the firing pin.

If the trigger is in binary mode, and the shooter decides they don’t want the second shot fired when the trigger is released, he or she can switch the trigger back to the semi-auto setting. 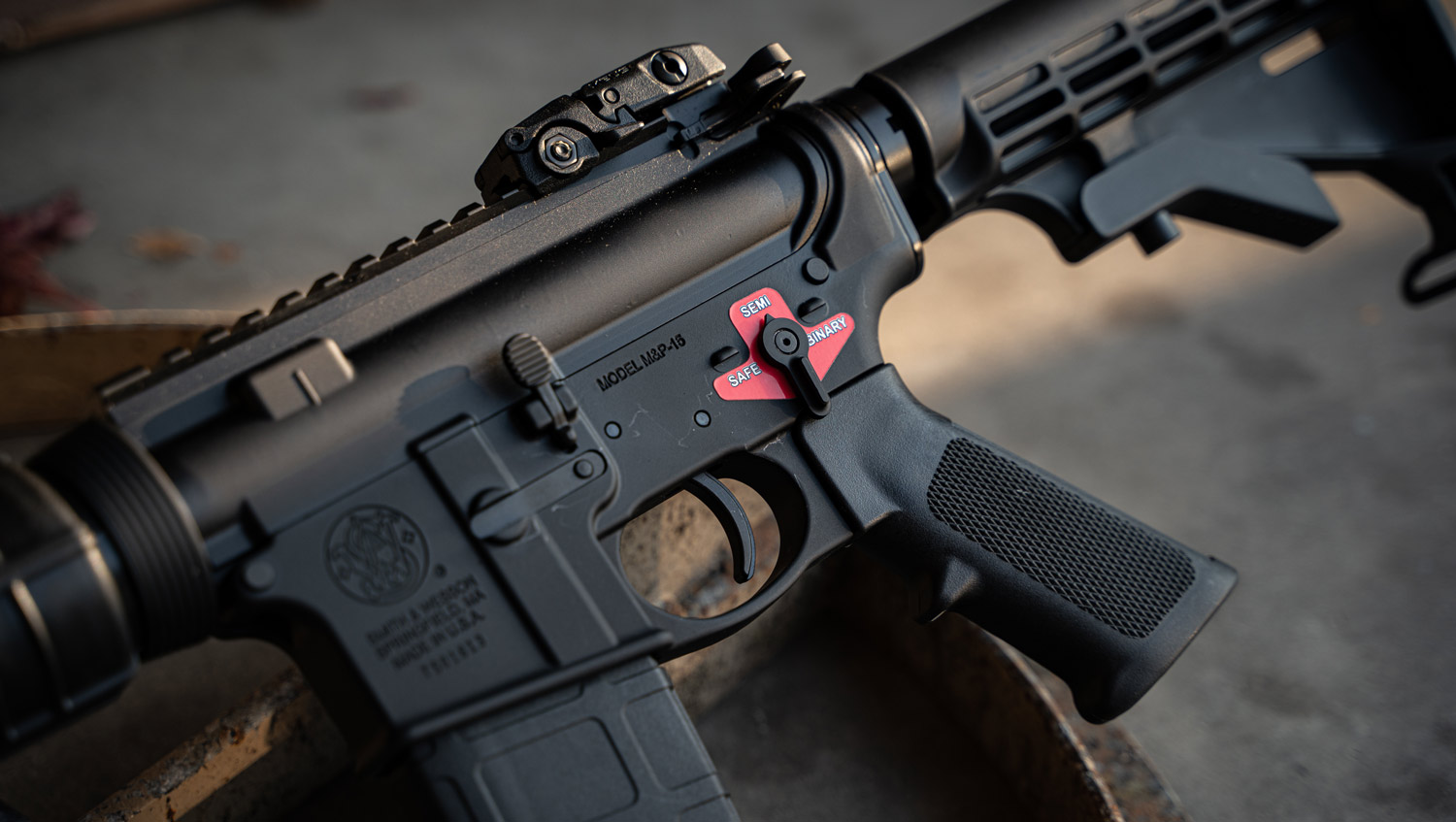 Are they legal? Yes. On the federal level.

At least for now.

As of the writing of this article, the Bureau of Alcohol, Tobacco and Firearms (BATF) has given a (probably reluctant) thumbs up to binary triggers.

Binary triggers also do not fall under the umbrella of the 2018 federal “Bump Stock Ban.” The ban applies to attachments that allow semi-automatic weapons to fire a continuous stream of ammo with a single pull of the trigger.

Weapons with a binary trigger are not considered “machine guns.” They do not function like bump stocks, and they don’t qualify as “fully automatic.” This means binary triggers are not NFA items.

In fact, a binary trigger is one of the few ways you can legally increase your firing speed without encroaching on the territory of the National Firearms Act.

For example, while binary triggers are not technically illegal in Texas, some local law enforcement agencies consider them “machine gun parts” (which is probably proof of their general ignorance of firearms and how they work). Machine gun parts, auto sears, and other automatic weapon components are prohibited in Texas (except for parts registered with the BATF and manufactured before 1986).

So, if you’re running a binary trigger on your AR and a neighbor misinterprets your rapid mag dump as “machine gun” fire and then calls the law, you could be in trouble.

Understanding all the nuances of state firearms regulations would take far more time and brain power than I have to invest. Especially since these laws seem to change with more frequency than the average teenage boy changes his underwear.

Also, I am not a lawyer.

Before you seek out a binary trigger, be sure to check all current federal, state, and local firearms regulations in your locality.

However, to save you some time, here is a partial list of states that say “no” to binary triggers.

States with vague legislation that could be interpreted to include binary triggers:

What Are the Practical Uses of Binary Triggers? 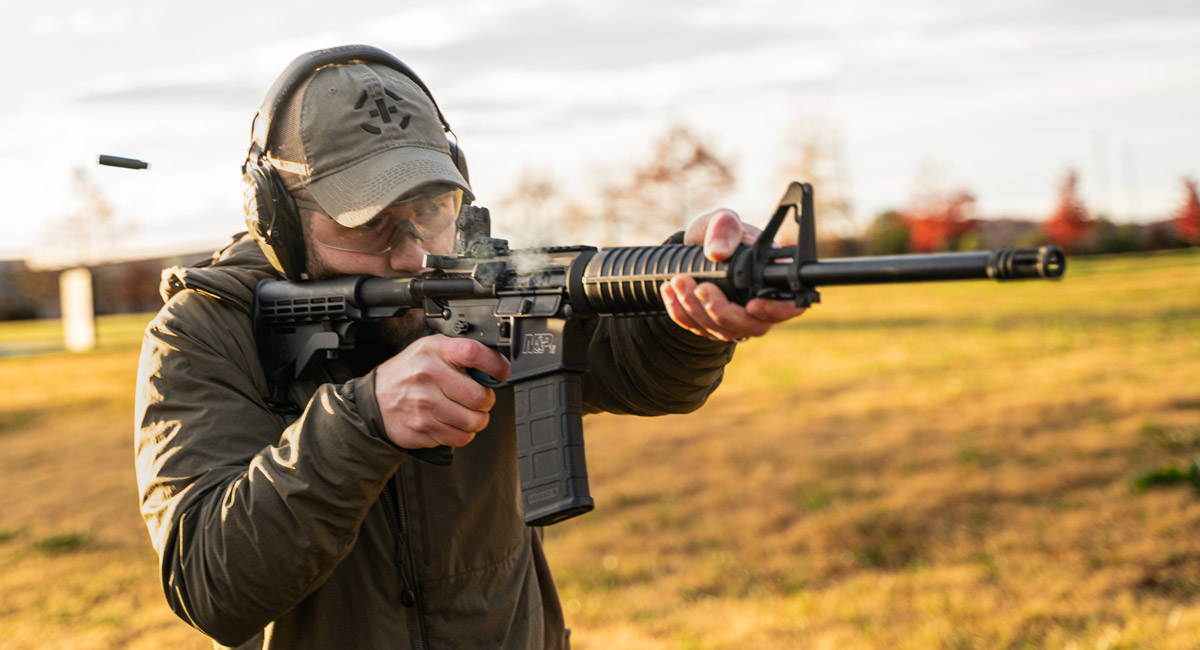 Although there are a handful of companies manufacturing their own version of the binary trigger, Franklin Armory’s BFSIII is definitely the most popular. Plenty of shooters enjoy running some version of the BFSIII in their ARs, HKs, ACRs, AKs, and even their 10/22s.

According to Franklin Armory, their binary trigger is “ideal for both tactical and competition use.”

There are plenty of shooting pundits who seem to agree with them.

The Binary Trigger for Competition Shooting

Since speed is the second most important factor in competition success, the shooter running a binary trigger should theoretically have an advantage over one who is not. In a timed competition, the shooter who makes the most shots in the shortest amount of time should be crowned the winner.

Only, that’s not quite true.

While speed is certainly important, the biggest factor in competition success is accuracy. It really doesn’t matter how fast you can pull off shots if those shots don’t hit their intended target.

Besides, most shooting competitions, including USPSA and IDPA, won’t even let you use a binary trigger.

Binary Triggers for Tactical and Self Defense Shooting

So what about “tactical use?”

You can certainly use a binary trigger for a double tap or hammer pair. (This is when the shooter pops off two rounds in rapid succession on the same target.) This technique doesn’t require the shooter to achieve a solid sight picture before squeezing off the second shot. Essentially, a binary trigger could be used the same way, pulling two shots off the same sight picture. However, it really only works (with or without a binary trigger) at closer ranges, where recoil won’t throw that second round way off target.

The problem is most people don’t even know how to properly use a standard trigger (I’m certainly still working on it). Throw in an extra shot with every trigger pull, and your form will probably degrade rapidly.

If you don’t believe me, check out the shooters in Franklin Armory’s promotional video. That guy is slapping the trigger like it just insulted his Mama.

Personally, I want positive control of every round I fire, especially in a self-defense situation.

Don’t get me wrong. I don’t think maintaining positive control of your shots is impossible with a binary trigger. It’s just going to take some practice, especially if you can’t consistently control a standard trigger. You’re going to need rock-solid shooting fundamentals.

I will at least concede that a binary trigger could have a powerful psychological effect on “bad guys.” I think what sounds like a full-auto spray of ammo coming toward you at a blistering 3200 feet per second would likely be a compelling deterrent.

It Doesn’t Have to be Practical

Sometimes, we gun guys and gals get so caught up defending the practicality of our weapons for sport or self-defense that we forget shooting is just plain fun.

As the old saying goes, “All work and no play makes Jack a dull boy.”

And when it comes to fun, there are few things more gratifying, entertaining, or downright soul-healing than sending an insane volume of lead downrange.

Do you need a binary trigger?

Need is a pretty strong word.

But, you know what? My neighbor doesn’t really need that sports car parked in his garage either. He can drive back and forth to work just fine in a boring old Toyota Camry. There really is no practical use for a 650 horsepower V-8 engine. Especially when my neighbor, great guy that he is, could potentially break the law with all those horses under the hood.

Binary triggers are kind of like sports cars. A go-fast gun delivers the same adrenaline surge and sheer enjoyment as a go-fast car. There is some primal place in our bodies that gets high on raw speed and power, even when the full potential is constrained by range rules and traffic laws.

These triggers are one of dozens of AR-15 parts you can swap in and out to make your tool work best for your needs. Ultimately, if it’s something you enjoy or find useful – then, why not install one?

A binary trigger can make a modern sporting rifle run like a Singer sewing machine. However, it creates a serious ammo eating experience that really is much more fun when someone else is buying the ammo.

But fun is still fun, even when it’s expensive. And we could all use a little recreational therapy these days.

Just be careful. Those rapid-fire mag dumps will heat up a firearm faster than…well…faster than a speeding bullet.