Trigger Weight – Does it Matter? 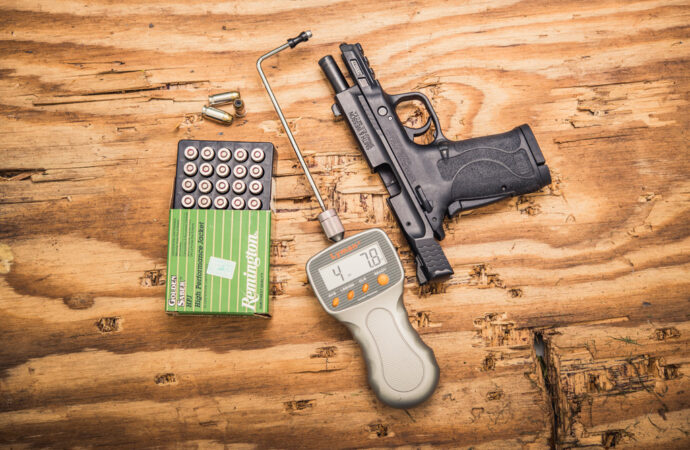 Barrel length. Magazine capacity. Twist rate. Choke. The list goes on. There are a ton of variables involved in firearms. While you don’t have to be a ballistics expert, if you own or use a firearm, there are some important aspects that you need to understand. One of those aspects is trigger weight.

One of the most important, and usually under-appreciated aspects of shooting is trigger weight. (Sometimes called trigger pressure or pull weight.)

Trigger weight is how hard you have to pull on a firearm’s trigger for it to fire. This impacts how you use a handgun, rifle, or shotgun. It also plays an important role in the accuracy, timing, and (according to some) the safety of a firearm.

By understanding trigger pressure, you can select the right firearm, or modify a firearm to your specific needs. Trigger pull weight remains an important subject if you’re “just” a weekend plinker or if you’re elite law enforcement or military personnel.

Trigger Weight: An Important Factor for Every Shooter

What is Trigger Weight? 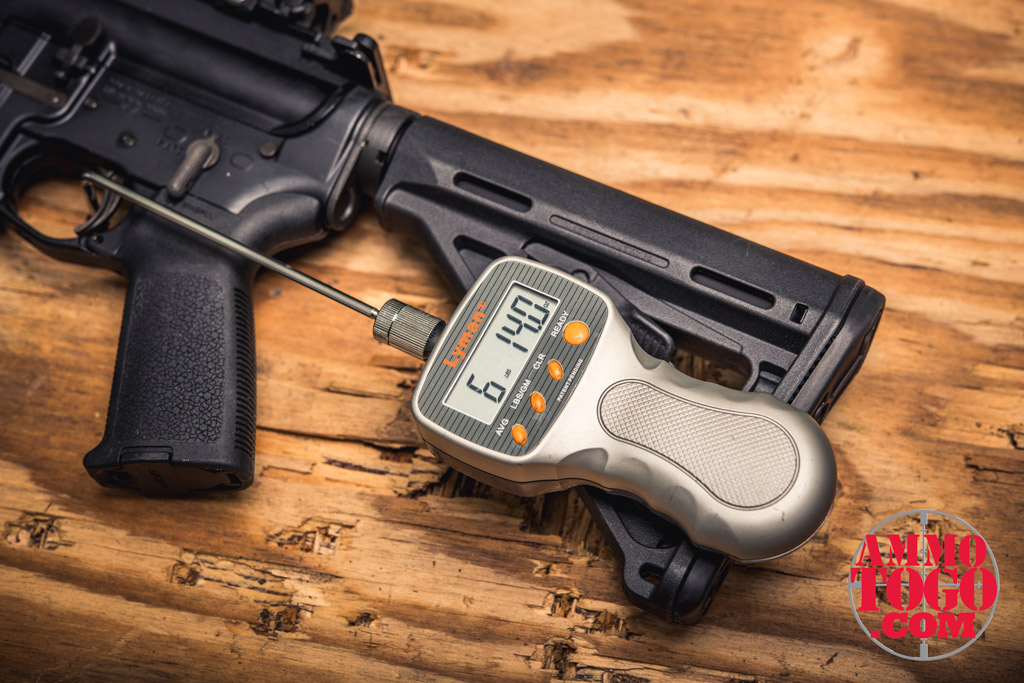 A digital trigger weight guide will tell you the amount of pressure it takes to pull the trigger on your firearm.

Trigger weight is simply the amount of pressure it takes to squeeze the trigger far enough so it releases the hammer or striker. Although the overall impact and significance is debated, there is a general consensus that trigger weight plays at least some role in the overall performance of a shooter and firearm.

Generally speaking, the lighter the trigger weight, the more accurate a shooter will be. This is because a heavy trigger weight requires more effort from the finger, hand, and forearm, which can disrupt the straight-line aim of the shooter. (We contend that with practice, just about anyone can overcome a high trigger weight and shoot accurately.)

This weight category is usually used for hitting targets at medium to long distances. When accuracy is at a premium, you need to do everything possible to stabilize the firearm. This is why lighter trigger pressures are preferred for hunting and target-shooting rifles.

Striker-fired pistols, which have an internal striker instead of a visible hammer, usually have higher trigger pressures, about 5 to 7 pounds. While some may feel this weight is too much for accurate shooting, with practice and patience this weight can be mastered by virtually any concealed-carry user. For example, a striker-fired Glock 17 pistol direct from the factory has a trigger weight of about 5 pounds. If you have a double action / single action pistol, the first trigger pull could be in the neighborhood of 12-13 pounds with 5 pounds or so for every single trigger pull thereafter.

The weight category is also used in a few hunting rifles, although manufacturers are trending towards lighter trigger pressure for their hunting products.

Because a double-action revolver cocks the hammer and fires with the squeeze of the trigger, there is a stronger tigger weight for these weapons. Semiautomatic pistols that use a hammer also have a higher trigger pressure, at least for the first shot. These weapons usually have a trigger pressure around 10 pounds, but once the first shot is fired, the slide uses energy from the cartridge to move backward, cocking the hammer. Followup shots, therefore, are usually in the 3- to 5-pound range.

Many shooters associated higher trigger pressures with higher safety. There have even been police forces, including the NYPD, that have implemented pistols with 12-pound pressures in an effort to increase safety. Opponents argue this disrupts the officer’s shooting, while other claim that, with practice, firing a 12-pound trigger can be just as effective. 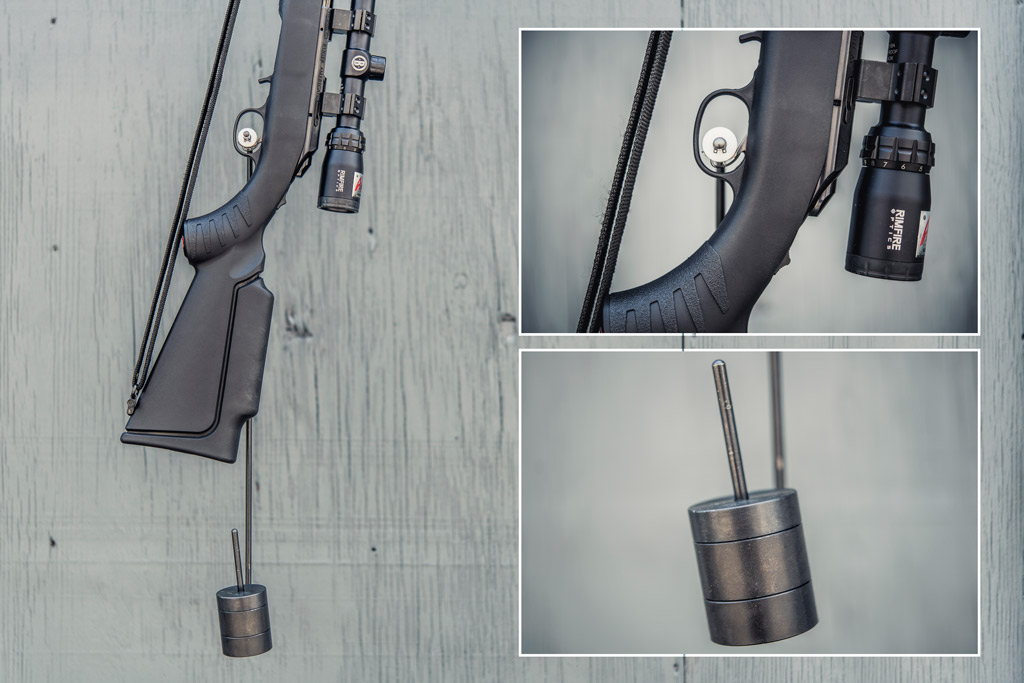 Don’t let the simplicity of a set universal weights fool you, this is still one of the most accurate methods in the industry for measuring trigger weight.

If you are doing trigger work with your rifle, or if you’re simply curious about the trigger pressure on your firearms, you can use different trigger-pull gauges to get a measurement on your rifle, pistol, or shotgun. These gauges generally come in digital and spring types.

These tools have an L-shaped rod that is attached to a reading mechanism (either a spring or digital component). Hooking the L-rod on the trigger, you gently pull back until the unloaded gun dry-fires. (Perform all safety precaution, including unloading, checking, double-checking, and pointing the gun in a safe direction!) Once the gun fires, you will have an accurate reading on your trigger pressure. Of course, you may want to perform multiple tests to ensure greater accuracy.

Should You Choose Low Trigger Pressure…

With easier triggers, some believe you can shoot more accurately. Competitive pistol shooters also prefer light triggers for both accuracy and easy follow up shots.

With higher pressure, accuracy can be impacted but you are (at least in theory) less likely to have an accidental fire.

Final Note: High Trigger Weight Does Not Replace Safety, Low Does Not Make You Accurate 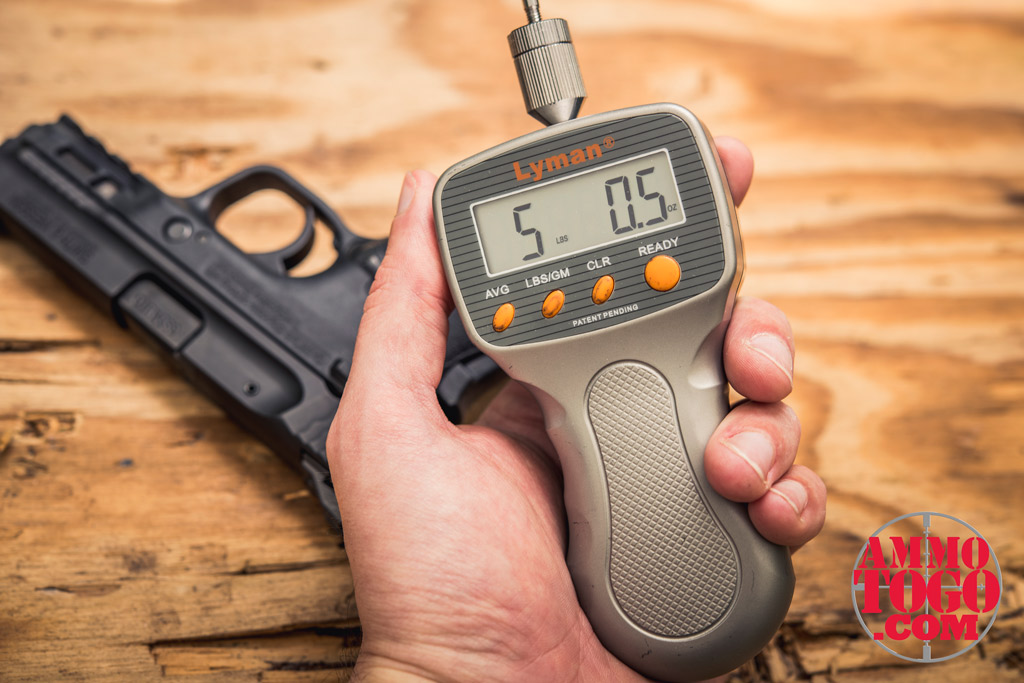 A lighter trigger pull may not always be the best option, in high-stress situations, it’s more likely to cause an accidental discharge.

The simple truth is that nothing replaces meticulous use of safety procedures, no matter what type of trigger or firearm you have. We’d argue only practice whether it’s dry-fire or live fire training can make you an accurate shooter.

Even if you have a low trigger weight, you still need to practice with your firearm to maintain proficient use; even if the weight is high, you must respect all safety precautions, including never placing your finger on the trigger until you are ready to shoot.

Despite the fact that the user is most important, trigger pressure remains an important feature and can impact how you use your weapons. If you optimize trigger weight for your needs, it could help make you a more effective trapshooter, hunter or more competent defender.