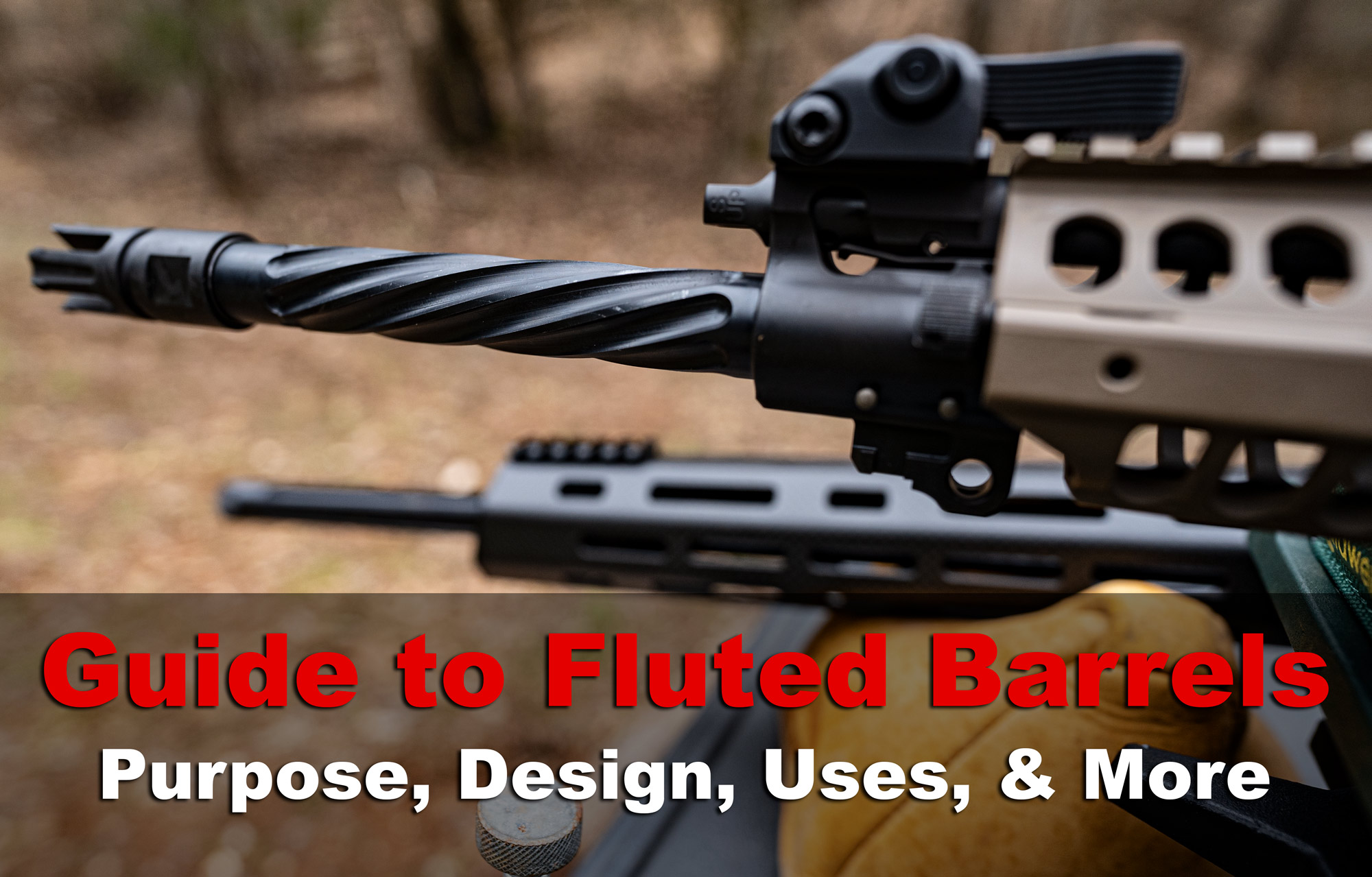 An easy to understand guide to fluted barrels. What are their advantages over non-fluted barrels and should you get one?

A fluted barrel is essentially a barrel with grooves on the exterior. “Fluting,” which is a also a term you will meet in firearms research, is simply the process of creating these grooves in the barrel.

Fluted barrels can come in many different sizes, patterns, and styles. You will generally find that these barrels have a few advantages. Of course, there is little consensus on the effectiveness and importance of these advantages.

Whether of not these advantages are worth the investment is up to you.

What Does A Fluted Barrel Do?

While the performance advantage you receive from a fluted barrel can be hard to measure, you will generally find three specific advantages.

The first advantage is weight reduction, which is important to competition shooters and hunters. By creating grooves in the barrel, fluting reduces the amount of metal, creating a lighter barrel. This lighter profile can be an advantage for competion shooters. A lighter firearm is generally easier to carry. So, performance may increase during tactical and movement-based events.

Fluting can also help bring a firearm to weight if that is a requirement for the competition.

Lighter rifles are also beneficial to hunters who may have to carry the firearm across long distances.

If you were to compare a fluted barrel to a similar non-fluted barrel, you would find the the fluted option will be stiffer. This stiffness has an advantage for accuracy. Although you can’t see it with the human eye, when you fire ammo in your rifle, the barrel is placed under a high level of stress and action. It’s so much stress, the barrel begins to vibrate. The complex dynamics of energy transfer and accuracy can be difficult to describe with clarity, but we generally accept that the stiffer the barrel is, the more accurate it will be. Therefore, many shooters believe fluting increases accuracy.

Lastly, there is the belief that fluted barrels cool faster than regular barrels. This is an advantage shooters frequently debate. (Not everyone accepts this point.)

Depending on the size, shape, design, and depth of the grooves, fluted barrels will have a large overall surface space compared to round barrels. With proper air movement over the surface of the barrel, it’s believed that heat will be removed from the barrel much faster. This seems like a perfectly reasonable theory, but it’s not accepted by all. Skeptics of this theory point out that because the barrel is made from less mass, it will actually heat up faster too, so any cooling advantages are counteracted by the potential for the barrel to gain heat.

Aesthetic appeal is another factor that is considered an advantage of fluting, but this is obviously all personal preference and not related to the firearm’s performance. Some people, quite frankly, think a fluted barrel looks sleek, stylish, and unique, and with many of the spiral and diamond patterns available, it’s hard to argue. It certainly can set your barrel apart from the crowd…until, of course, the crowd starts using fluted barrels!

You can generally find a few different designs when it comes to fluting. Although the performance advantages between the different types seem minimal at best, the designs do give the barrel a varying visual appearance.

Moving around the barrel in a spiral pattern, this gives the barrel a twisted look that many gun owners find attractive.

You can also find barrels with a diamond pattern. Manufacturers create this by cutting two spiral grooves that run in opposite directions. This gives the barrel a diamond shape as the grooves cross over.

You will generally find shooters use fluted barrels for either competition shooting or hunting. The reduction in weight and potential gains in accuracy are usually the goal for these types of barrels, so gun owners who compete or hunt may find use from fluting. However, it seems that among general gun owners who prefer casual target practice, fluting will do little beyond giving the barrel a unique appearance.

How to Have A Barrel Fluted

If you decide that you’d like to use a fluted barrel, you have two options. First, you can purchase a rifle with a barrel that is already fluted. There are many options available. You can even find them online. So, you should be able to find a fluted barrel in the brand and caliber you need.

The second option is to have your barrel fluted by a professional. There are barrel experts across the country that can take one of your barrels and have it fluted. This isn’t always cost-effective and you’ll find competition shooters who want a precise rifle do this.