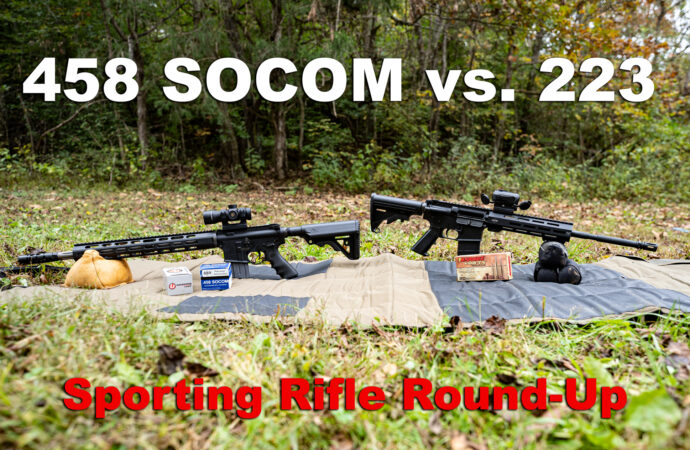 A side by side comparison of 458 SOCOM vs 223. Which of these two popular sporting rifle calibers are best for you? This guide will help you decide.

The .223 Remington is without a doubt the king of the modern sporting rifle. With versatile performance, a fair price, and reliable accuracy, this cartridge has earned the respect of rifle shooters all across the country.

But sometimes we want (or need) something a little different, and the .458 SOCOM certainly offers a unique shooting experience. Many sporting rifles can be easily equipped to shoot the .458 SOCOM. Lots of shooters are starting to adopt this powerful round. Will it take the place of the .223 Remington? That remains to be seen.

If you look at both cartridges side-by-side, it’s easy to distinguish the two. There is clearly a size difference, as the .458 SOCOM is significantly larger than the .223 Remington. With bullets that are twice as wide than the .223, and cases that are about a quarter of an inch longer, there is just more heft behind the .458 SOCOM. Perhaps most significant is the difference in bullet weights. While the .223 Remington can pack bullets over 70 grains (with a standard weight of 55 grains) the .458 SOCOM is loaded with bullets as heavy as 600 grains. (Although most products with weights 500 grains or more are usually subsonic products.)

Another important factor for gun owners is cartridge availability. In this case, the .223 Remington is far more prevalent, and you can find it stocked on shelves all across the country. From big-box stores to local shops to online retailers, there are few ammo suppliers that don’t offer the .223 Remington. (Just like there are few manufacturers that don’t make multiple options for the .223.)

The .458 SOCOM, on the other hand, is more of a specialty round. It can be harder to find at even well-supplied online retailers. If shopping from your local gun store, you may need to place a special order.

Shooters will also find that .223 ammo is more affordable.

So we changed things up. Instead, we selected four .223 Remington loads, ranging from 35 grains to 72 grains. We also picked four .458 SOCOMs ranging from 200 grains to 405 grains.

Because it has such a profound impact on ballistic performance and trajectory, velocity is an important concern for any cartridge. These are two distinct rounds; as such we see a clear difference in velocity performance. Overall, the .223 Remington is a much faster round. Most cartridges will be in the range of 2,500 to 3,500 to feet-per-second, while the .458 SOCOM rarely reached into the 2,200’s. Of all eight rounds we looked at, the fastest was the 35-grain NTX Superformance which had a muzzle speed of 4,000 fps. The fastest .458 SOCOM, on the other hand, had a speed that was 500 fps slower than the slowest .223 Remington.

Among the four .223 Remington cartridges we looked at, there was an average muzzle velocity of 3,265 fps, while the average muzzle speed for the .458 SOCOM was under 2,000 fps.

With much heavier bullets, backed by a cartridge that is also larger, the .458 SOCOM is one of the most powerful rounds you can use. That’s one of the reasons why it’s so popular among the AR-style community. Generally speaking, the heavier the bullet, the more power you will have in muzzle energy, and we see this clearly playing out in the above stats.

From top to bottom, we see the energy steadily increasing, with the 405-grain round from Buffalo Bore holding the highest power (2,523 ft-lbs). The heavier bullets of the 458 SOCOM ammunition offerings are obvious once they reach their target too. The image below demonstrates the hole punched into a cardboard target from about 50 yards out with each of the calibers. 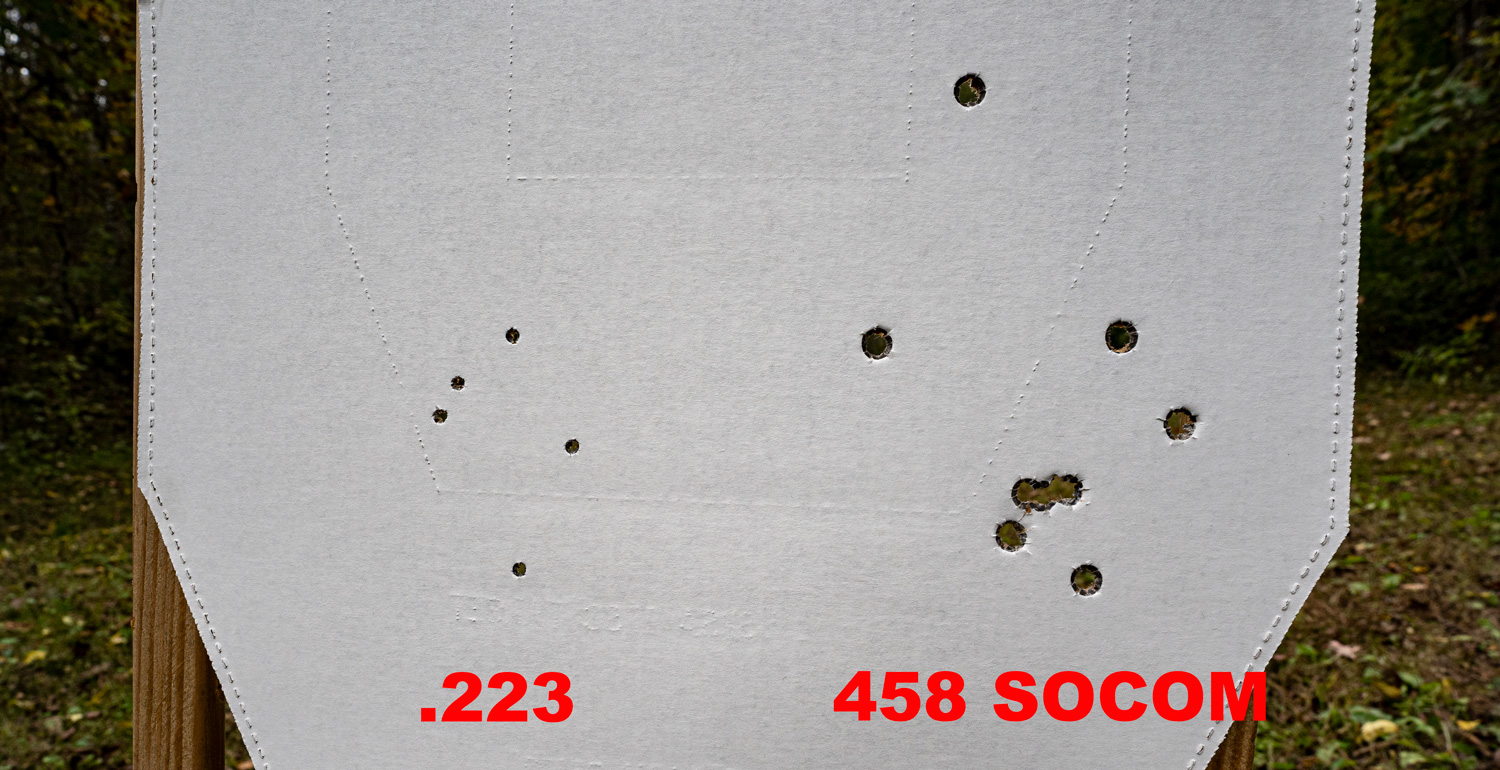 Clearly the .458 SOCOM is the more powerful round, at least for muzzle energy. The gap is massive. The weakest SOCOM we looked at was roughly 1,000 ft-lbs more powerful than the strongest .223 Remington. 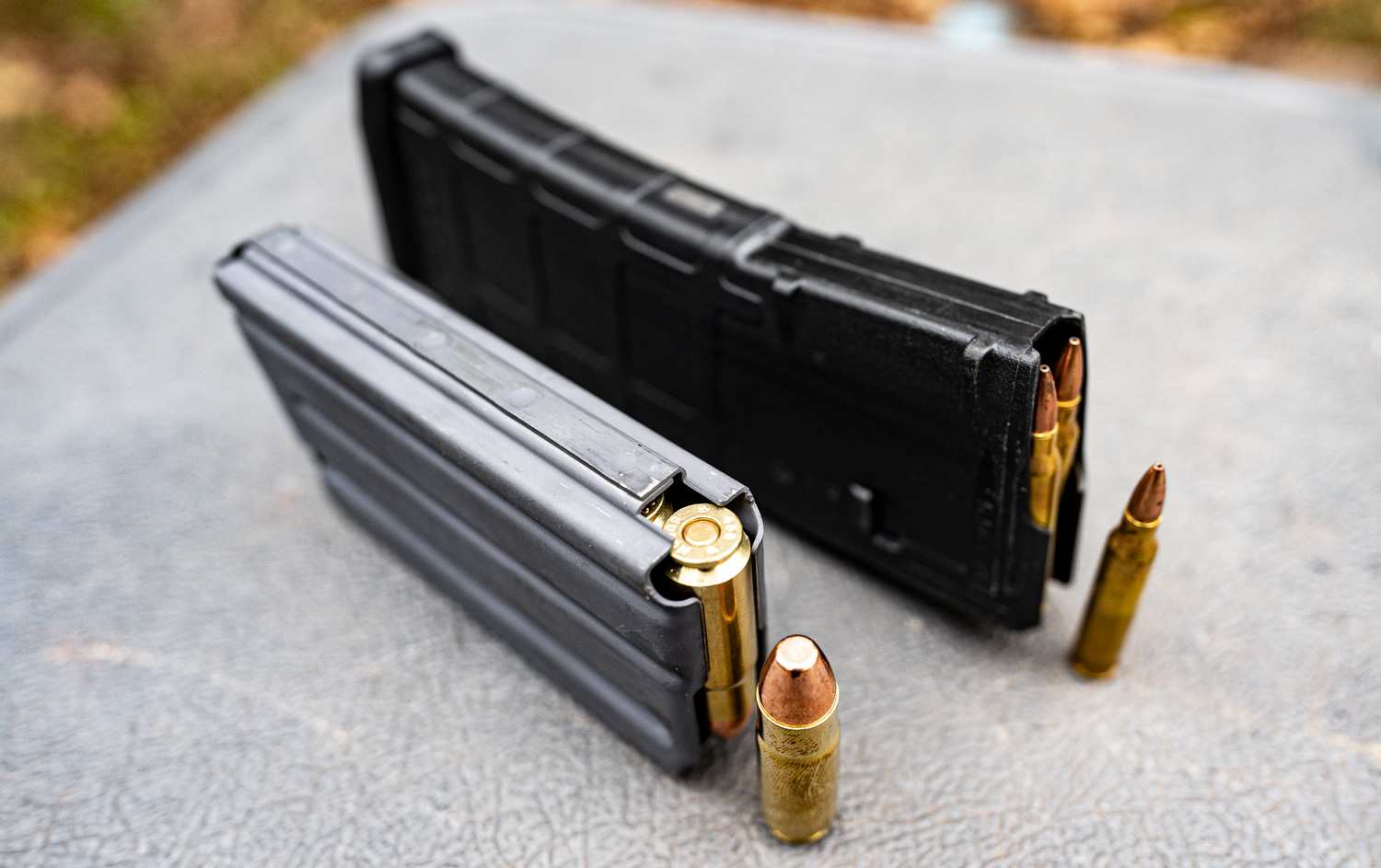 Capacity is a tricky thing. We hate to call anything “high capacity” and all that good stuff that politicians seem to drool over. In the case of 223 vs 458 SOCOM however, there is a huge difference in what most shooters would consider the “standard capacity” of each.

For 223 Remington, a 30-round pMag by Magpul is largely considered the “go-to” magazine. Sure, you can find drum magazines, smaller magazines that hold 20 rounds or fewer and even 40 round pMags now, but 30 rounds is the norm.

If you’re going with 458 SOCOM, 10 rounds is largely considered the standard magazine size.

This might not matter much to you if you’re just looking for something to shoot at the range. If you’re considering something for suppressive or cover fire, spraying with the 30 round .223 Remington magazines might make more sense.

So which one is right for you? The easy answer is “both!” If you have an AR-style firearm from one of the major manufacturers, you can likely equip your rifle to fire both with the appropriate upper unit.

But if you had to decide, the .223 Remington is best for medium-sized game animals, medium to long-range shooting, and varmint control. However, if you want a powerful semiautomatic weapon for large game animals, the .458 SOCOM is a great choice.

If you are new to the sport of shooting, the more affordable, available, and manageable .223 Remington may be a better choice. But if you are ready to move your AR-style weapon into a bigger cartridge, the .458 SOCOM is sure to please.