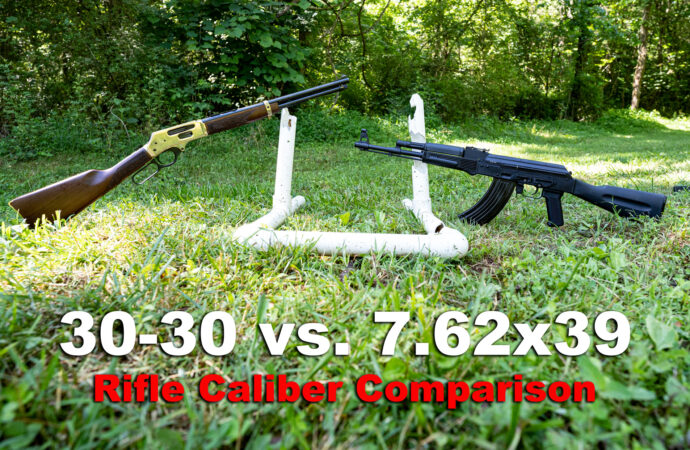 A look at 30-30 vs 7.62x39 and each caliber's capabilities. This article can help you decide which caliber is better for your shooting needs and how they stack up ballistically.

The .30-30 Winchester versus 7.62x39mm are two very different cartridges. Loaded into different types of rifles, one is a classic American cartridge while the other is associated with the Soviet Union. One was made for harvesting medium and large game, while the other was made specifically for military purposes.

Ballistically, however, they share many similarities. So which one if the right option for your needs?

First and foremost, you should understand you’ll use these two cartridges with entirely different rifles. If you prefer one over the other, performance factors like velocity and energy may not matter.

You traditionally fire 30-30 ammo from a lever-action rifle. Typically, you’ll use the 7.62x39mm Soviet with a semi-automatic rifle (like an AK-47.) The firing rate of the 7.62x39mm will be higher, while the .30-30 Winchester offers the classic shooting experience of a “cowboy action,” as lever guns are sometimes called.

Both of these cartridges pack ammunition as light as roughly 125 grains (123 grain in the case of the 7.62x39mm). So while they both start with similar sizes, the .30-30 Winchester can go much higher. Its bullets come as heavy as 170 grains or more. For 7.62x39mm ammo options, you are essentially limited to cartridges of 123 or 124 grains, with very few exceptions.

The speed performances of these two cartridges are so similar that if we were to start over, randomly select different rounds, and run the same comparison, we may find entirely different results. That said, it appears that the .30-30 Winchester comes out of the barrel a bit faster, while the lighter bullets and higher ballistic coefficient of the 7.62 rounds help maintain a slim downrange-speed advantage.

Although the speed performances were close enough to call it a draw, for energy we have a clear winner. But once again, it’s not a blowout victory. The .30-30 Winchester, mostly due to the heavier bullets, has a clear advantage in the energy comparison. All four products had muzzle energies over 1,800 foot-pounds, while the 7.62×39 never breached 1,600; the closest being 1,552 by the Remington product.

For downrange energies, it was a little closer. Because the 7.62×39 can maintain velocity, it also retains energy. So, its average was only about 100 ft-lbs less than the .30-30’s.

One aspect is notable: the downrange energies for the .30-30 range from 761 to 1,146 ft-lbs, while the 7.62 was always in the 800s. This suggests that product selection is (even more) critical if you are using the .30-30 Winchester for medium-range hunting.

The .30-30 Winchester can deliver more power downrange. But can it do so with accuracy?

It seems that if you were selective with your cartridges, you could likely find ammunition for the 7.62x39mm that would perform just as well as the .30-30 products we have selected. However, in the hands of a skilled marksman it appears the average .30-30 Winchester round has more potential as a medium- to long-range hunting product. (Although, the be fair, most shooters don’t consider either a true long-distance round.)

Selecting the right cartridge for your needs is important, and you should consider factors like velocity, energy, and trajectory when you make a choice. However, if you prefer the classic shooting experience of a lever-action rifle, the .30-30 is likely your best choice. If you want high-volume shooting from a semi-automatic weapon, the 7.62x39mm Soviet is a better option.

You can use both can for harvesting deer and other medium-sized animals at close and mid ranges. That said, the .30-30 appears to have more effective reach than the 7.62×39. That said, with the right barrel and the right cartridge, the 7.62 can deliver effective accuracy and ballistic performance at 200 yards or more.

Whether you prefer a lever-action loaded with .30-30 rounds, or an AK-style semi-automatic with 7.62x39mm cartridges, you’ll find the products you need at AmmoToGo.com. Visit our site and browse a large selection of affordable, effective ammunition for home, range, and field.