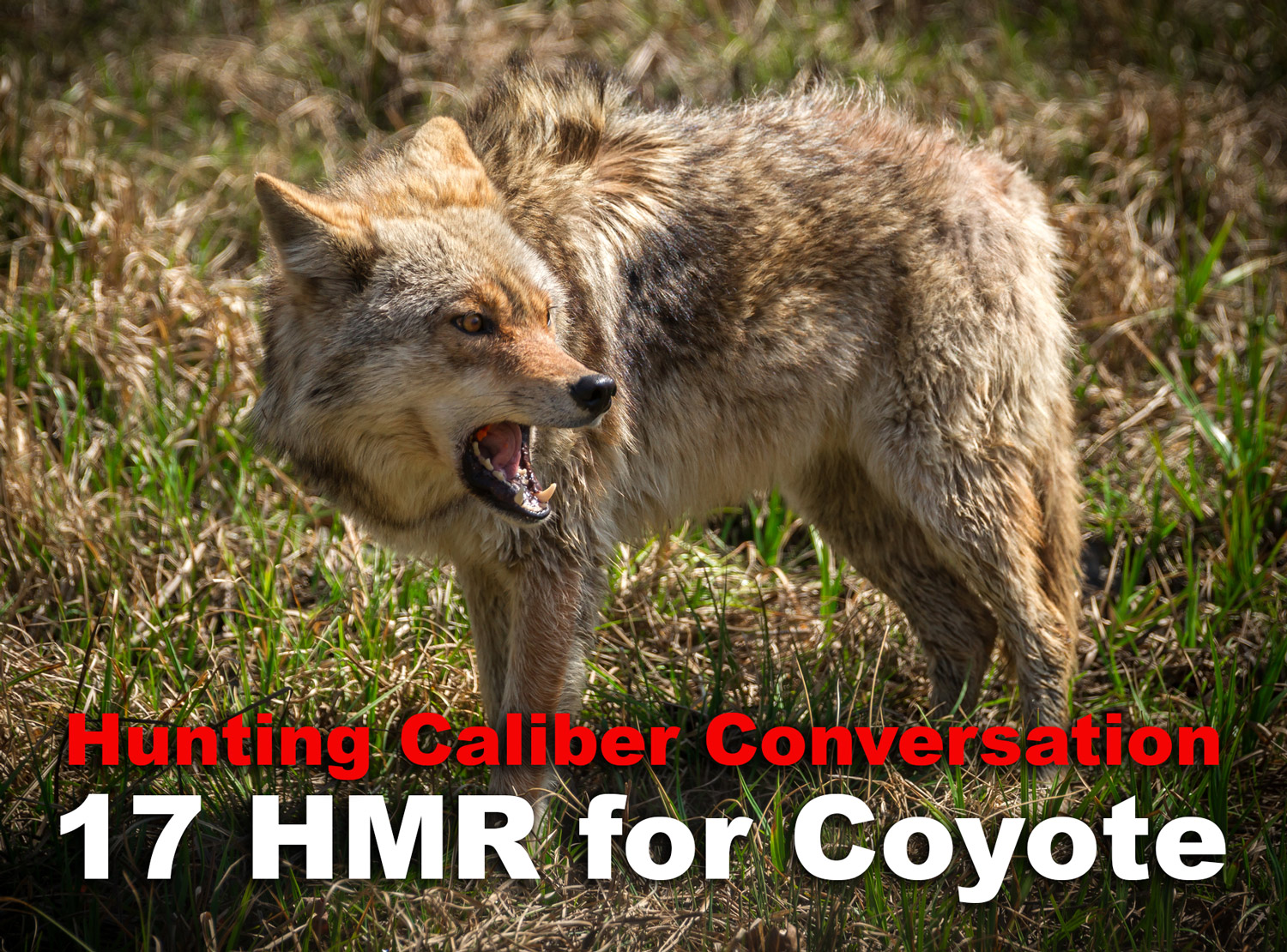 A look at the 17 HMR caliber and how it can be effectively used by coyote hunters in the field. We include a quick look at 17 HMR ballistics and some recommendations for specific ammo loads.

Is 17 HMR good for coyote hunting? Yes – but it’s not ideal.

The 17 HMR’s suitability for coyote hunting comes with a caveat: Keep a much closer distance between yourself and your quarry than you would if you were varmint hunting. The 17 HMR does not transfer enough energy to quickly and humanely kill a coyote across its entire 200-yard effective range.

To be sure, plenty of folks have fired the 17 HMR to take hares and such at 250+ yards. But that’s a much smaller critter. When it comes to hunting coyote, you would ideally have your bullet transfer at least 10 ft lbs of impact energy for every pound your quarry weighs.

Here’s the unsatisfying conclusion to our little math exercise: No 17 HMR ammo will transfer 290 ft lbs of energy to its target, even right out of the muzzle.

So, When Can We Hunt Coyote With 17 HMR? 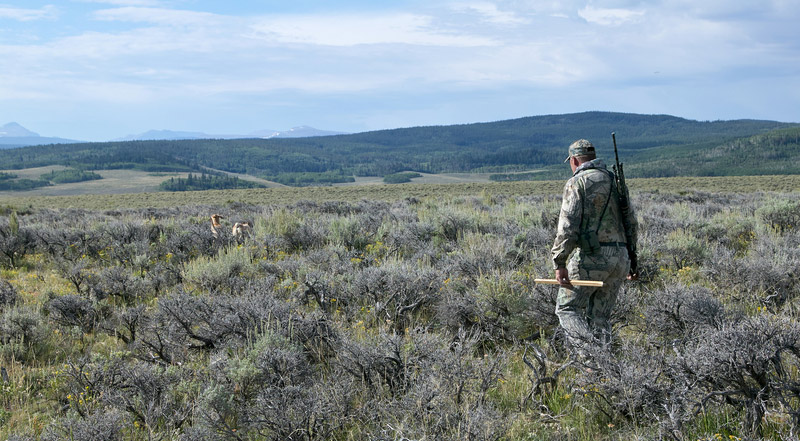 But as we said earlier, not all coyote weigh 29 pounds. Refer to our carefully collected ballistic data and you will see that a 17 HMR bullet will easily transfer the recommended energy to a 20 pound coyote at 25 yards (which is admittedly pretty close). The smallest coyote will let the 17 HMR satisfy the minimum impact energy rule beyond 75 yards!

The 17 HMR has a key advantage working in its favor: accuracy. This is a flat-shooting cartridge, which lets a competent shooter group shots like clockwork at ranges well beyond 100 yards. In short, if you utilize that precision to land your bullet right in the ‘yote’s brain or ticker, you’re going to watch the roguish beast go down like a sack of bricks – even if you do hit it with significantly less energy than its body weight would optimally call for. 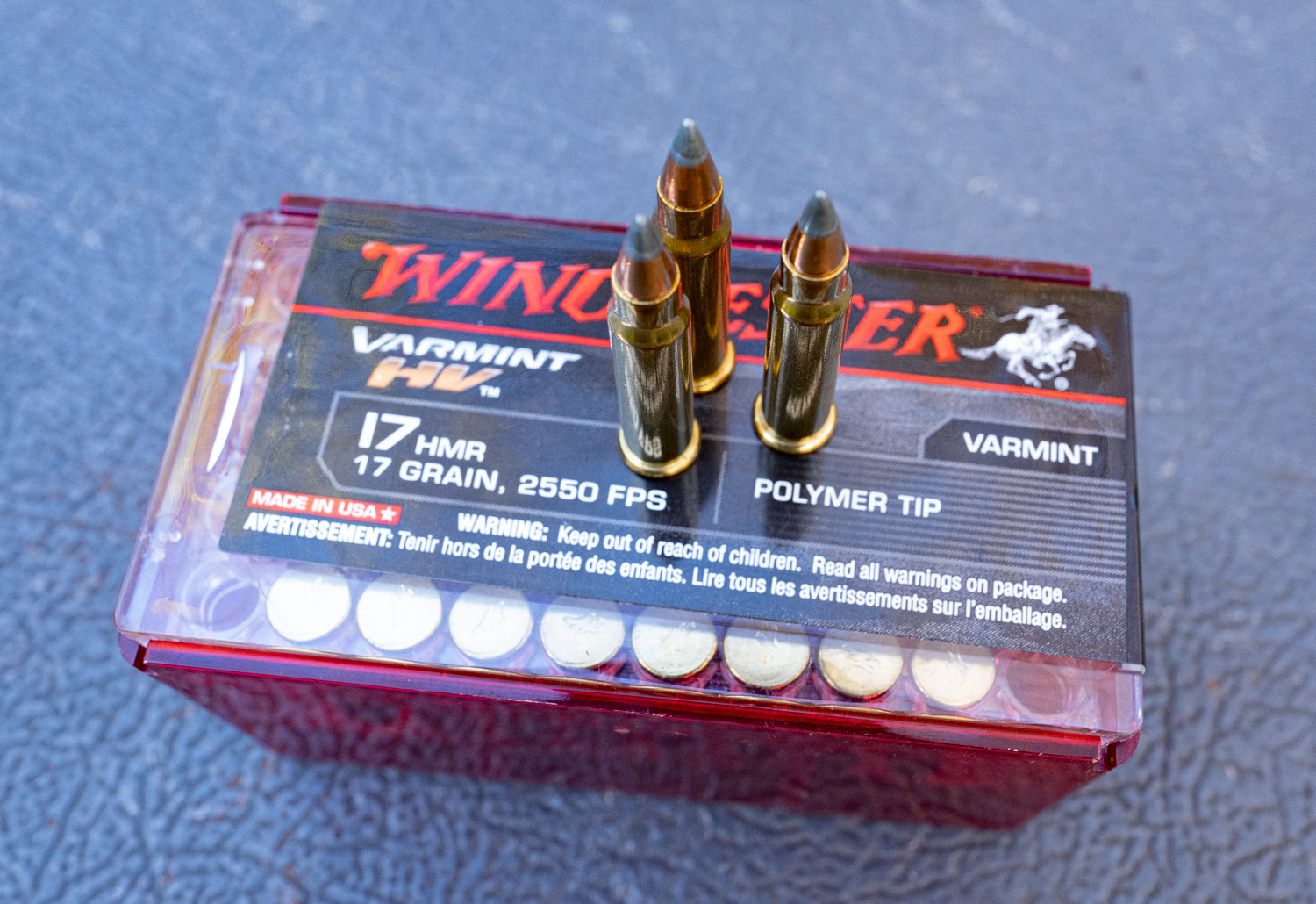 We don’t like recommending an FMJ bullet for hunting anything other than varmints. Granted, if a non-expanding bullet’s wound channel overlaps with the heart or some crucial vertebra, the animal’s going down pronto. (Plenty of hog hunters use FMJs to sever their prey’s cervical column in exactly this fashion.) But the FMJ’s terminal ballistics are just too lackluster for larger (and more intelligent) game.

We recommend a polymer-tipped bullet for coyote. Hornady’s V-MAX is exceptional. Its polymer tip rests on the rim of its jacket and extends deep down into its swaged lead core’s precision formed cavity. On impact the V-MAX’s tip builds up substantial energy before it connects with the bottom of the cavity, at which point the bullet explodes in a violent display of fragmentation. The V-MAX’s terminal ballistics do tend to make its wound channel relatively shallow, so shot placement does count for a great deal when you’re hunting coyote with this bullet.

A JHP will do just fine as well. Hornady’s high-tech XTP, which has little notches radiating from its nose cavity to promote faster and more uniform terminal expansion, is an excellent choice for hunting coyote, but a generic JHP will do the trick as well. Once again, we don’t advise relying on a JHP’s raw power for hunting coyote with a 17 HMR. Remember the two H’s: head and heart.

We recommend all the cartridges compared in our ballistic data for coyote hunting except for the Hornady NTX load. Its bullet is just a little too light and its wound channel is just a little too shallow for our liking. If you’d like to order some 17 HMR for coyote hunting from our site, then we’ll be happy to help you with whatever we’ve got in stock! If you’d like to look elsewhere, then here are our recommended rounds’ SKU numbers to assist you on your search.